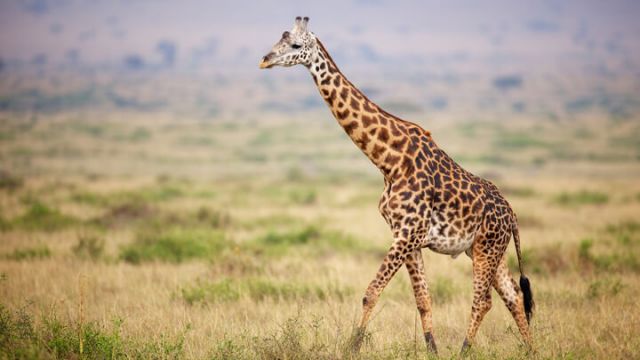 While not listed as an endangered species, giraffe populations are declining at alarming rates.  In 2000, experts estimated that as many as 140,000 giraffes roamed Africa, but now they believe that number has plummeted to 80,000 — a decline of 40 percent in just 15 years.

Like many species, giraffes have lost much of their historical range due to habitat destruction from human activities, but their population decline can be attributed to other causes as well.

Beliefs about the curative properties of giraffes have led to their increased value on the black market. In Tanzania it is believed that consuming the brains or bone marrow of a giraffe can be a cure for HIV, with a single serving of brain or bone fetching as much as $140. Some villages in Africa burn the skin of giraffes as a cure for nosebleeds. A giraffe tail is also thought to be something of a good luck charm for hunters.

Giraffes are often a source of “bushmeat” in Africa, which provides food and income in many areas. As a rather big animal, giraffes can be a large score of meat for a single bullet, which has value to poachers. Giraffe skin is also valuable for making bags, shoes and belts because of its toughness.

David O’Connor, researcher from the San Diego Zoo, believes the perception that giraffe populations are not declining comes from their visibility in popular culture. “They’re so pervasive. Giraffes are everywhere. Look at kids’ books, which are full of giraffes,” he said. “They’re always in zoo collections. They’re easily visible, so you don’t think we have to worry about them. But we do.”

Julian Fennessey, co-founder and co-director of the Giraffe Conservation Foundation, believes that a lack of attention from conservation groups has also led to dwindling populations. Fennessey, who runs the foundation with his wife in Namibia, started the organization in part because he was unable to find anyone who was doing anything similar. “Until I started full-time in September, there’s never been a full-time giraffe conservationist ever,” he said. “They’re really not getting the attention they deserve.”

Another reason why declining giraffe populations are not receiving the same attention as other species is because of what Fennessey believes is an inaccurate classification of subspecies.

From DNA samples that Fennessey and his team have collected, the researchers believe that a more accurate classification would be to list each subspecies as a species all on its own. Currently there are nine listed subspecies of giraffes in Africa:

Extinct in Angola, but still found in Namibia. Estimated population: 13,000.

Found in Ethiopia and Sudan. Estimated population: less than 650.

Mainly found in Kenya, but small populations exist in Somalia and Ethiopia. Estimated population: less than 8,000.

Found in South Africa, Botswana, Zambia and Zimbabwe. These giraffes are doing better than the rest. Estimated population: more than 35,000.

Found in Zambia. Estimated population: under 550, but this is considered stable.

By the late 90s this species of giraffe was thought to be done for, with only 49 individuals left in the wild. Protective status in Niger has led to a population increase. Estimated population: more than 400. 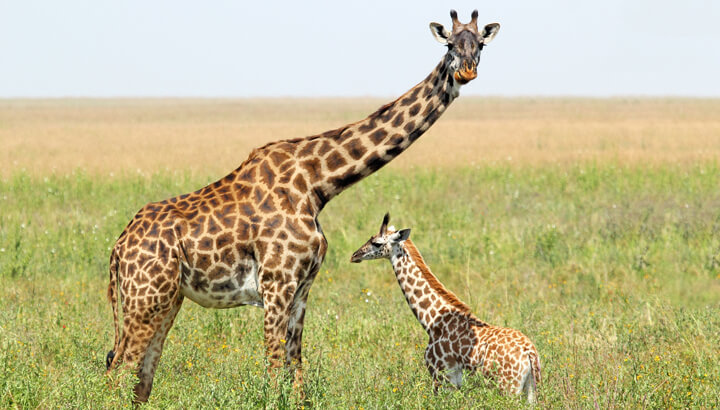 The Giraffe Conservation Foundation was recently featured on a BBC Documentary “Africa’s Gentle Giants.” The film chronicles Fennessey, his wife and two young children as they carry out the mission of the foundation.

Cameras follow the team as they embark on a risky but important project in Uganda. Underneath Murchison Falls National Park lays 75 percent of the country’s oil deposit, and plans are being made to extract it. This puts the wildlife populations living on top of that oil at risk. Park officials, along with Fennessey’s team, developed a plan to relocate 20 giraffes from the park to the other side of the Nile River, where they will be less vulnerable to any ill effects of the nearby oil extraction.

Relocating a giraffe is not a simple task, however, and can be very dangerous for both the giraffes and humans involved. A fall for a giraffe could be deadly, so using tranquilizers is tricky.  Park officials shoot special tranquilizers into the giraffe that weaken them enough to be lowered to the ground safely using rope. They must make sure that they do this quickly, however, since an antidote needs to be given to the giraffe within 20 minutes of receiving the tranquilizer.

From there the giraffes are loaded onto a specialized truck, which has branches and leaves to simulate forest (paid for by donors to the foundation) and reduce the traumatic nature of the experience. After crossing the Nile via boat, the giraffes are set free in the hopes that they will breed and create a population that is farther away from Uganda’s oil.

In order to protect giraffe populations, concerned members of the public need to get involved.  People are encouraged to “adopt a giraffe” from the Giraffe Conservation Foundation, where donations go to fund projects such as relocating populations of giraffes away from human activities, like oil extraction. An online petition addressed to the leaders of many African populations has already received close to 30,000 signatures as well.

With more public attention, the Giraffe Conservation Foundation is hoping we can prevent this “silent extinction” from happening.