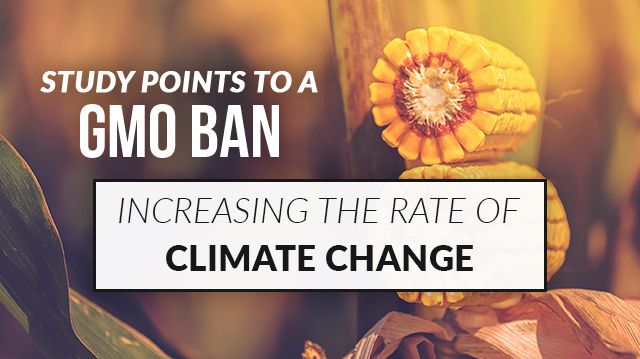 Genetically modified crops continue to be a very controversial topic in the United States and abroad. While proponents point to the benefits to farmers and increased crop production from GMO seeds, concerned health and environmental groups point to the lack of long-term testing on the impacts to human health and ecosystems as cause for concern.

A study out of Purdue University added a new twist to the GMO debate recently, when it concluded that a GMO ban in the United States would speed up climate change. The study was conducted by a team of professors and students of agricultural economics at Purdue, and involved the inputting of data into a Global Trade Analysis Project (GTAP) model that is used to predict the economic impacts from agricultural and environmental actions and/or policies. The team used agricultural data from farms that grow GMO crops and those that do not from across the United States.

An important note is that this study was funded by the California Grain and Feed Association, an NGO whose board of directors is made up of employees from companies such as J.D. Heiskell & Company, Foster Farms and Imperial Western Products.

According to the model, because of the smaller yields from non-GMO crops, the United States would have to convert 102,000 additional hectares of land to compensate for the amount of food lost if there was a nationwide ban on GMO crops. With more forestland being converted for agricultural purposes, this would mean less carbon dioxide absorbed from the atmosphere by trees. The assumption therefore is, less GMOs means more climate change.

Problems with the study

In addition to being funded by companies that have the potential to be impacted financially by GMO legislation, several other facets of the study are being flagged as problematic by environmental groups.

One issue is that the study measures farms growing GMO crops versus farms not growing GMO crops, and draws the conclusion that the only difference between the two types of farms is the nature of the seeds they use.

Emily Cassidy, a research analyst from the Environmental Working Group responded to the study by pointing out that GMO seeds are more expensive to purchase. Therefore, farms that do so are more likely to be in a better financial situation and thus able to spend more on fertilizer, irrigation, and other farming management practices that could also explain the higher yields on their farms.

Another problematic part of the study is the presumption that lower yields from non-GMO farms would result in increased deforestation to compensate for the reduced amount of food produced. The study fails to mention numerous other actions that could be taken in order to improve agricultural land-use efficiency, which would also compensate for the reduced yields of non-GMO crops.

The presentation of this idea is usually met with groans and other sounds meant to convey annoyance. However, it is the case that a tremendous reduction in greenhouse gas (GHG) emissions would result from a reduced dependence on livestock as a protein source in our diet.

While some estimates of GHG emissions from livestock fluctuate wildly, the Food and Agriculture Organization of the United Nations estimates that 14.5 percent of all anthropocentric GHG emissions are from agricultural livestock. Cows produce methane, which is a more powerful greenhouse gas than carbon dioxide, but concentrations of methane have not increased as much as C0₂ in the postindustrial world.

In the report “The Global Benefits of Eating Less Meat” author Mark Gold points out that 70 percent of the grain grown in the world is fed to livestock, and in fact, what we feed to cattle would be enough to meet the caloric needs of just under nine billion people. The reduced crop yields from a GMO ban that the researchers warn of could be compensated for then by decreasing the amount of agricultural land used for livestock grazing, and increasing the amount used for other potential sources of protein.

From monocropping to polyculture

Another agricultural land-use efficiency change that could be made is moving away from a monocropping model to one that utilizes more diverse crops on each farm.

Monocropping, the practice of growing just one type of crop on agricultural land, can lead to soil depletion, which then makes it harder for future generations of crops on the same land.

Critics of monocropping practices advocate for rotating the crops that are grown on a farm. They suggest that a diverse range of crops grown at any given time is beneficial for both the farmer and the land. Logistical problems for farmers, such as the need for crop-specific equipment, often make this difficult, however.

Despite its difficulties, a polyculture (multiple crops grown at the same time) or intercropping (rotating which crops are grown on the land) model of agriculture utilizes shared resources and expertise amongst farmers. This could help compensate for the lower crop yields and increased deforestation that the Purdue study concludes would result from a nationwide ban on GMOs.

What does the Purdue study show us?

Clearly, a lot more research needs to be done. All the researchers actually did was compare farms that grow GMO crops to farms that do not, and then estimate how much land would be needed to compensate for the lost food if all farms switched to a non-GMO variety.

That this research team took the information and concluded that GMOs help combat climate change is a suspicious jump in logic that ignores two conclusion-changing points:

—Other actions could be taken, aside from increased deforestation, in order to compensate for the lower crop yields.

After taking the above factors into consideration, it really becomes difficult to say what conclusions, if any, one can draw from this study.

What do you think? Do GMOs have a role to play in our efforts to slow the rate of climate change?