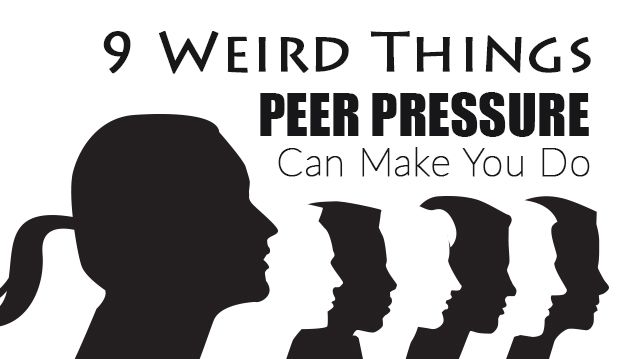 Growing up, we were always told in school, “Don’t cave in to peer pressure.” Whether it was in health class learning about the effects of smoking, or parents ensuring that we behaved, peer pressure is something we generally associate with adolescence.

But hang on a second, when you look at the actual definition of peer pressure, you quickly realize that it’s not just an issue for teenagers…

Hmm, when was the last time you did something only because everyone else was?

Article: Why Saying “No” Is Healthy

Peer pressure in adulthood can make you do some odd things…

When teenagers are subjected to “bad” peer pressure, it generally entails devious or even dangerous behavior. Even if you’re not necessarily disobeying authority, it does not mean that you’re not caving in to peer pressure around you.

The truth is, peer pressure can come in many forms — both negative and positive. Regardless, social influence is a powerful force and it can make adults do some weird things that they would not necessarily do on their own. Have you been guilty of the following?

Hey, just because you graduated from high school, doesn’t mean that the troubles surrounding alcohol disappear. Maybe you met up with a friend you haven’t seen in a long time, only to find out that they like hitting the bottle a little heavier than you do.

After begging you to stay out longer, continually buying you drinks because “you haven’t seen each other in so long,” it happens — you drink too much and miss work the next day. Not good. If you had not been placed in that situation, would you have carried on drinking, knowing that you needed to get up for work the next morning?

Credit can be a great thing: It can help you in emergency situations; it has your back when you forget cash; and it’s a smart way to accumulate points and other related benefits. With that being said, unless you have the money to pay your purchases off, you can quickly make a deal with the devil.

You know how much wiggle room you have in terms of your finances, so why would you let someone else talk you into overspending? Of course, it’s ultimately your decision, but if your friend begs you to go on vacation with them, even though you’re two mortgage payments behind, that’s what you call peer pressure, my friend.

I’m the first one to support a good charity, don’t get me wrong — I have a soft spot for helping the homeless, as well as the environment. There are plenty of amazing charities out there, and if there’s something that’s personally important to you, support that cause.

With that being said, don’t feel as though you need to contribute to something you don’t agree with, just because your friends are. Just because something has been labeled as “charity” does not necessarily mean that funds are being spent as donors assume.

The social pressures of giving were uncovered in an interesting study. Researchers were interested in how much people would give to an art gallery if all donations were visible. When starting with $20 in a glass bowl, participants gave more, in comparison to a bowl that started off with coins. Instead of giving what people personally wanted, they went with what others were contributing around them.

Being a member of a specific political party

Oh politics — no wonder being a kid was so simple, we didn’t understand the complexity of political parties. With the upcoming election, perhaps some of you have felt this pressure from your immediate social circle, as well as from strangers.

Yes, civil duty plays a role in heading out to the polls, but don’t think that peer pressure doesn’t influence decisions as well. Within a well-known study, households were told that their voting records would be made public after the election — meaning, neighbors would know whether or not an individual had voted.

What they found was that simply learning their neighbors may find out whether or not they voted, was enough to significantly impact the overall turnout. This shows that the fear associated with what others think, as well as the feeling of obligation and accountability, does in fact influence behavior.

You know the old saying, “Keeping up with the Joneses” — well, far too many people are concerned with what their peers think, instead of what they personally want or need. This idea is complex, as the Western world has been conditioned to consume, consume, consume.

Within one study, the results were fairly shocking. Researchers were interested in the behaviors of in-flight passengers. What they found was that passengers were 30 percent more likely to purchase an item if the person sitting next to them bought something as well. It could be anything — a movie, pillow, drink, or whatever is available. This clearly shows how outside social influences impact our personal choices.

Trying to be ultra thin

This is particularly an issue among young women, and in a way, influences how we behave and view ourselves throughout adulthood. Studies have shown that external pressure from the media to be thin does, in fact, encourage body dissatisfaction. What about peer pressure?

Within one study, published in the International Journal of Eating Disorders, it was found that when exposed to social pressure regarding one’s weight, body dissatisfaction resulted. Then again, this can be turned into a positive — as a friend or loved one may encourage and support you to lose weight in order to boost your overall well-being.

Going into a career you hate

When choosing your own personal career path, peer pressure can be both positive and negative. In some ways, it can push you towards achieving more, ensuring your success. In other cases, pressure from parents or friends can cause you to settle into a career you hate, just to make others happy. Unfortunately, this isn’t uncommon.

Sending your kids to school

There are a number of ways in which parents experience peer pressure relating to the education their children receive. For example, if your group of friends are all sending their children to a private school, would you feel as though you needed to pull your kid from public school as well?

In terms of spending, back-to-school shopping also appears to be a problematic area for moms and dads. Within a poll, it was found that 58 percent of Canadian adults admitted that peer pressure influences their back-to-school spending habits. Even when on a budget, the majority planned to spend over $200, while 12 percent normally spend over $400.

In 2012, a national survey of 1,200 American women of reproductive age who chose not to  have children said they felt greater social pressure to have a child than other women. It’s said that motherhood is highly linked to American femininity, leaving many women feeling as though they need to be mothers.

There’s a system that has been put in place — fall in love, get married, have a family. At the end of the day, having a child to please someone else isn’t the right decision. Everyone chooses their own life path and being confident in your choices is critical — so, march to the beat of your drum.

Every decision and choice we make, determines a new potential path. We are so fortunate to live in a society where we have that option. As long as you’re not placing yourself or others in harms way, stick to your guns.

You also need to look at your social group, choosing your friends wisely. When you hang with a circle of individuals who are confident in themselves, accepting and positive, you will be less likely to face uncomfortable, negative peer pressure.

If all else fails, listen to your gut — in most cases, you can determine whether a choice is right or wrong. Be assertive and stand up for what you personally believe in. Peer pressure will never go away — we’re a society that thrives on social interaction. Instead, it’s about managing that pressure, controlling your own thoughts and behaviors. Make your own choices and learn from your own mistakes.