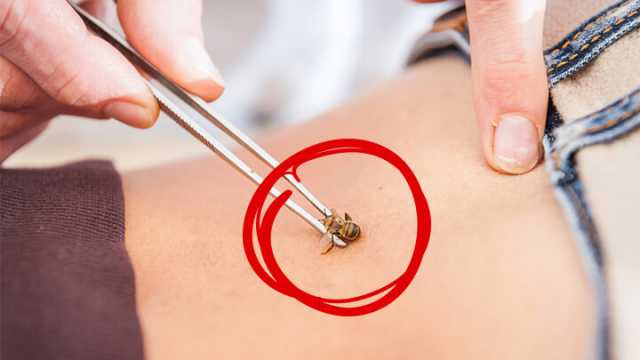 Given a choice, a bee sting is something you would probably choose to avoid. Yet, a growing number of people are actually choosing to be stung by bees as an alternative form of medicine called apitherapy. But are there real benefits linked to bee venom?

Bee sting therapy is the medicinal use of products made by honeybees such as honey, pollen, royal jelly, propolis, beeswax and bee venom. Therapies involving the honeybee have existed for thousands of years. Bee venom therapy was even practiced in ancient Egypt, Greece and China. Ancient civilizations recognized the healing properties of bee venom for treating arthritis and other joint problems. Today, growing scientific evidence suggests that bee products promote healing by improving circulation, decreasing inflammation and stimulating a healthy immune response according to The American Apitherapy Society Inc.

Charlie Mraz, a founding member of the American Apitherapy Society was recognized in the United States as the pioneer of bee venom therapy. He initiated clinical research with scientists at the Sloan-Kettering Institute and the Walter Reed Army Institute. He also established the standard for purity for dried whole venom for the U.S. Food and Drug Administration (USDA) and was the supplier of venom to pharmaceutical companies throughout the world.

In 1981, Mraz wrote about bee venom therapy — from the perspective of Dr. Bodog F. Beck’s book “Bee Venom Therapy” — and its effect on arthritis and rheumatoid conditions. Previously, the venom was injected by needle into affected areas depending on the location of the arthritis. The application of the venom is most effective when applied to the “trigger points” or “hot spots,” matching acupuncture or acupressure points. According to Mraz, pressure is applied to the area with the thumb. When the thumb presses a trigger point, it produces sharp pain. It is this point that is treated with venom. Today, the venom is most often extracted and diluted, and delivered through “herbal acupuncture.”

Bee venom contains about 40 different healing compounds, including melittin. This is a 26-residue peptide and the major component of bee venom. Research suggests melittin has anti-inflammatory, antiarthritic, anticancer and antimicrobial properties. Along with the other components, it works to boost immunity and quicken the healing process.

At first, there’s not much swelling from the venom. But later, the treatment does produce swelling, redness, itching, heat, more pain and even nausea. It’s at this point that Dr. Bodog found arthritic patients were discouraged, and therefore opted against further treatment, stating “reactions” to the venom. But according to Bodog’s research, the “reactive stage” is the most essential part of the treatment, as it’s an indication that the “immune system” is being stimulated to produce the healing processes.

If treatment is continued, after about two weeks of this “reactive period,” there is the stage of “resistance.” That’s when the body develops a resistance to the bee venom and will no longer swell when the venom is injected. After the stage of resistance is reached, treatments usually stop. In fact, bee sting therapy does not need to be applied again until symptoms recur, which can be years later or not at all.

Here are some of the benefits of bee sting therapy:

Bee venom may help treat arthritis. An animal study published in the Journal of Ethnopharmacology found that bee venom helps prevent arthritis in rabbits. Bee venom seems to prevent arthritis through hormones called glucocorticoids. These hormones help regulate inflammation and may even slow the progression of inflammatory arthritis. In addition, clinical evidence from 304 studies published in the BMJ Open found evidence that supports bee venom acupuncture as a viable treatment for symptoms of rheumatoid arthritis in humans. Those who used bee venom reported fewer swollen joints, tender joints and less morning stiffness than those who were given a placebo.

Nanoparticles carrying a toxin found in bee venom can destroy human immunodeficiency virus (HIV) while leaving surrounding cells unharmed, reports Washington University’s the Source. This research from the Washington University School of Medicine in St. Louis point towards developing a vaginal gel that may prevent the spread of HIV, the virus that causes AIDS. Nanoparticles carrying melittin (a major component in bee venom) fuse with HIV, destroying the virus’s protective envelope.

“Melittin on the nanoparticles fuses with the viral envelope,” said Dr. Joshua L. Hood, a research instructor in medicine to the Source. “The melittin forms little pore-like attack complexes and ruptures the envelope, stripping it off the virus,” said Hood. The study shows that although destroying HIV, melittin does not harm normal cells.

While this study does not address contraception, Hood suggests the gel could also be adapted to target sperm. Although some people may only want the HIV protection. Researchers aim to find couples where only one of the partners has HIV, and they want to have a baby. “These particles by themselves are actually very safe for sperm, for the same reason they are safe for vaginal cells,” says Hood.

The most dominant ingredients in bee venom include melittin, adolapin and apamin. Each possesses anti-inflammatory properties and could help to reduce inflammation in the body. Benefits are also a result of the body’s own immune reaction to the venom. A Korean animal study designed to evaluate the anti-inflammatory and anti-cytokine effect of bee venom on induced arthritis in mice showed decreased signs of inflammation after bee sting acupuncture therapy. The therapy suppressed the development of arthritis and inhibited the immune responses in induced arthritis.

Lyme disease is caused by the bacterium Borrelia burgdorferi and is transmitted to humans through the bite of infected blacklegged ticks, according to the Centers for Disease Control and Prevention (CDC). Lyme disease is often difficult for doctors to diagnose, because the symptoms associated with the disease commonly mimic other ailments. In addition, the tick bite can be painless, making it difficult to even realize you have been bitten. Typical symptoms include fever, headache, fatigue and a characteristic skin rash, says the CDC. If left untreated, infection can spread to joints, the heart and the nervous system.

Although doctors typically prescribe antibiotics to treat Lyme, some people turn to apitherapy for relief. According to Mother Nature Network, practitioners of apitherapy usually mix bee products and bee venom in some combination with raw honey. They then apply it topically as a salve or a cream. However, according to one testimonial by Dave Stier noted on the American Apitherapy Society website, direct stinging also yields favorable results. “After being stung for several weeks now, I feel a dramatic increase in life energy and a decrease in stiffness in my joints.”

Apart from providing arthritic relief, the American Apitherapy Society suggests that the most popular and well-known use for honey bee venom in the United States is to treat those suffering from MS. Another testimonial on the website by Gerald Emshwiller claims that pain in his upper and lower back due to MS was virtually gone after the first week. And after the second week of treatment, he no longer had to use a cane for short or long walks. But, it’s important to note that although bee sting therapy is increasingly used to treat patients with MS, there is not enough clinical evidence to support the use.

Apitherapy does not only use bee venom for healing, it incorporates all the hive’s products — and usually in combination. For instance, Manuka honey is widely recognized and highly sought after because of its unique healing benefits. Regular bee honey is also used to treat a variety of ailments because of its broad-spectrum antimicrobial properties. These medicinal benefits come from low pH, high sugar concentration and the presence of bacteriostatic and bactericidal compounds. Hydrogen peroxide, antioxidants, lysozyme, polyphenols, phenolic acids, flavonoids and bee peptides are sometimes referred to as honey’s “peroxide” activity. Manuka honey has additional antimicrobial activity that goes above and beyond regular honey, according to Analytica Laboratories. Some strains of manuka honey are even richer in hydrogen peroxide, methylglyoxal and dihydroxyacetone.

Bee sting therapy may be controversial, but it does have followers, which will no doubt grow over time. A word of caution: many people are severely allergic to bee stings and may not even know it. Therefore, this practice could produce potentially life-threatening allergic reactions for certain individuals. Make sure to check with your doctor to see if bee sting therapy is a good option for you.