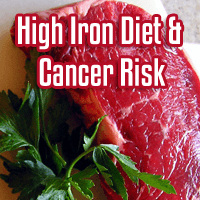 Researches in Scotland have gained an understanding in how genetic factors contribute to developing bowel cancer. Foods that contain high levels of iron may turn on genes associated with bowel cancer, triggering development of the illness.

Gut health is an issue that is on the minds of many people these days. Researchers at the Cancer Research UK Institute in Glasgow were looking for answers to what triggers bowel cancer development. What they discovered is that when a gut gene known as APC is faulty, it turns cells into bowel cancer cells when exposed to high levels of iron, such as those found in red meat and other foods.

When the APC gene is functioning normally, it protects gut health from exposure to iron and other chemicals found in red meat. However, researchers found that in approximately 8 out of 10 patients who develop bowel cancer, the APC gene is faulty. It is important to point out that although exposure to high levels of iron triggers the gene to turn on cancer cells, it is the presence of the faulty gene that determines the development of cancer.

Although eating a diet rich in foods such as red meat has been associated with colon cancer, heart problems and other health issues, it is important to remember that red meat protein has its place in a healthy diet. If you choose to eat this kind of protein, look for grass-fed, organically raised beef products. Other sources of healthy red meat protein include buffalo. Venison and ostrich can be excellent alternatives to your regular juicy beef steak.

Protein is an important part of a healthy diet. Most doctors now recognize that eating an occasional burger or steak does not pose an alarming health risk for most people. However, if you have concerns about developing colon or bowel cancer, consider the impact of the iron in the meat on your system and that eating it could potentially raise your risk for developing these types of cancer.