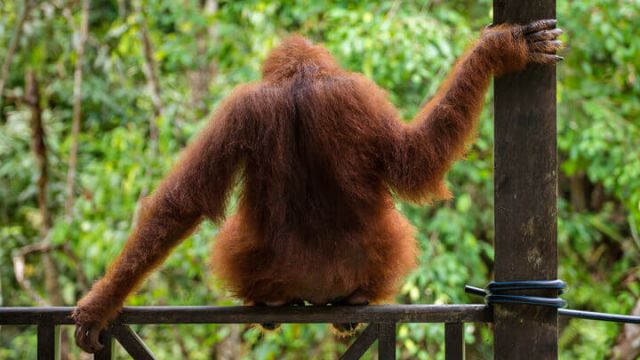 The term “orangutan” actually means “person of the forest,” as when they were discovered in areas of Indonesia and Malaysia, local people felt they were people who lived in trees. Orangutan and human DNA is 97 percent the same, so it’s not surprising that early contact with the species left us thinking they were people just like us. The more we learn about them the more we find they have advanced abilities to think and reason as well.

Orangutan societies build on previously learned knowledge the same way ours do. Once a current population learns something, such as how to get termites out of the ground using a long stick, that knowledge is passed down to future generations of orangutans.

Orangutan’s use of tools is the most advanced of any species aside from humans. There have been orangutans witnessed using spears to fish, using shaved-down sticks to open up fruit and breaking off tree branches to use as a tool for catching termites. Because knowledge is passed down from one generation to the next, their use of tools and problem-solving abilities improve with each generation. In this way, orangutan culture is more similar to ours than most other species.

If given hundreds or thousands of years, orangutans would likely develop more sophisticated tools (possibly even agriculture), but this is something we will most likely never know. Their society won’t have the chance to grow, expand and learn because our society has already done so much of that already.

Orangutans are endangered — and if we lose them completely, their thousands of years of knowledge-building will disappear right along with them. It would mean not only the death of a species but the death of another “culture.” 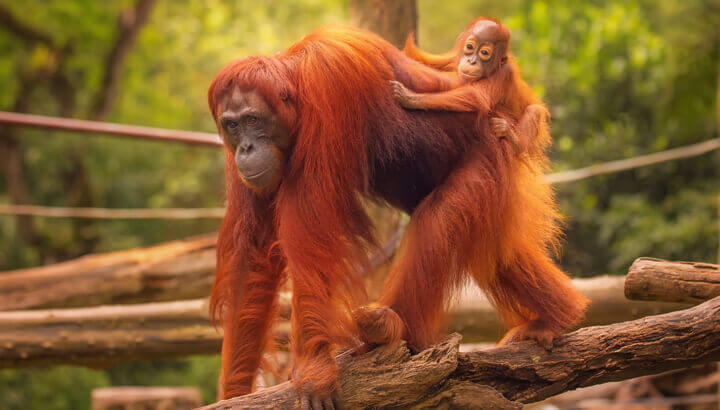 In the past, it was believed that as many as 230,000 orangutans inhabited the earth, but that number is believed to be now lower than 85,000.

There are two species of orangutan, the Bornean (less than 70,000 remain) and Sumatran (under 15,000 remain). Both species are listed as endangered.

The Bornean orangutans (found primarily in Borneo, but also in Sumatra) have lost more than 55 percent of their habitat over the last 20 years due to deforestation. They are often the victims of illegal pet trading operations as well.

The Sumatra orangutans received some positive news in March of this year, when a study indicated that their population was almost double what was previously thought. The population increase is not enough to land the Sumatra orangutan off the endangered species list, however, as there continues to be increasing concern regarding the habitat destruction caused by the palm oil industry. 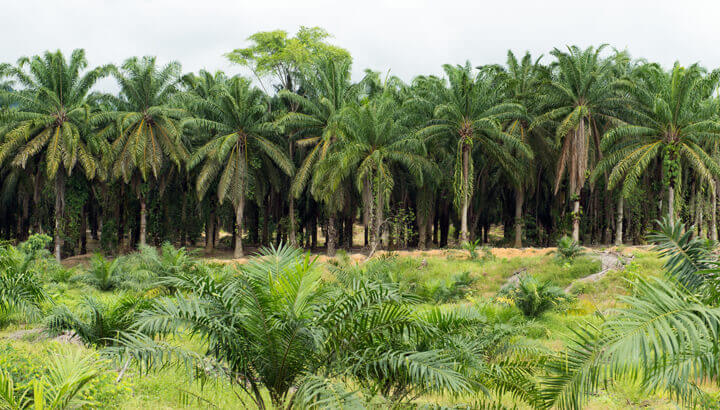 The Orangutan Project, a non-profit organization dedicated to orangutan conservation and awareness, estimates that every hour an area the size of three football fields is cut down in southeast Asia in order to create palm oil plantations, taking away precious habitat from orangutans.

Unless you are actively trying to avoid purchasing products with palm oil in it, your cupboard is probably stocked with products that contain it. Palm oil is estimated to be used in over half of all packaged products commonly found in grocery stores, which is why the industry is expanding so rapidly.

Palm oil is a type of vegetable oil that comes from palm fruit, proving that the names we give things often don’t make sense. Over 85 percent of this “vegetable” oil comes from southeast Asia, making it a major player in the area’s economy.

Even though the palm fruit tree is native to Western Africa, it can flourish in any warm area that receives lots of rainfall, allowing southeastern Asia to emerge as a place where it can be grown large-scale. So, instead of getting to witness another species advance and grow, we get vegetable oil that comes from a fruit.

Part of the reason orangutan children stay with their mothers for so long is because orangutans have so much to teach their offspring. Orangutans teach by demonstration, so throughout the near decade-long parenting period, the mother will show her youngster all of the tips and tools she has picked up throughout her life, such as shaving a stick and gathering termites or even fishing with a spear.

While this long parenting period has allowed the orangutans to build upon their knowledge (just as our society does) it has also led to slow reproduction times, which makes their population more susceptible to decline.

Fortunately for orangutans, this is an issue that people can easily get involved with. Simply by purchasing products that do not contain palm oil you can help use market forces to motivate companies to use palm oil alternatives. That’s the fun thing about a free market, you have the option to support not only the product that provides the most value to you but also the product that is produced in a way that’s consistent with your own ethics. We get a chance to purchase the change we want to see in the world, every time we are at the store.

Palm oil is the most frequently used vegetable oil, so avoiding it takes some craftiness. Fortunately, organizations such as the Say No to Palm Oil and the Orangutan Project have helpful online resources that can help you when making purchases.

Often palm oil will not be listed as an ingredient on packaging, but the most up-to-date shoppers guide available for conscientious consumers is the Cheyenne Zoo’s, available here.

As their knowledge continues to expand, there is really no telling what the orangutan society could discover if allowed to continue growing. If current rates of deforestation and hunting continue, however, we will never find out.