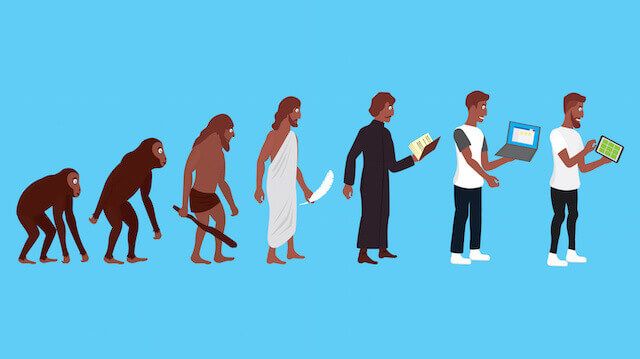 Continued advancements in our ability to analyze DNA have revealed that humans and chimpanzees are more similar to each other than chimps are to gorillas, orangutans, or any other species. In fact, chimpanzee and human DNA is between 95 percent and 98.5 percent similar; we are each other’s closest relative.

Many animal families, such as various types of squirrels, differ more from each other than we do from chimps. Yet these creatures are still grouped together, leading some to believe it only makes sense for humans and chimpanzees to be grouped together under the same genus: Homo.

Biologist Morris Goodman noted the inconsistencies between species classifications after co-authoring a study that concluded chimpanzees should be classified as Homo troglodytes, instead of Pan troglodytes.
“Moving chimps into the human genus might help us to realize our very great likeness, and therefore treasure more and treat humanely our closest relative.”

Human empathy of chimpanzee behavior
You don’t have to look very hard to find evidence that the behavior of chimpanzees and humans is often incredibly similar.

A video released in 2011 from the Chimfunshi Wildlife Orphanage in Zambia shows how a community of chimpanzees reacted to the discovery of a young member’s body after he had succumbed to a respiratory ailment and died. https://www.youtube.com/watch?v=lh5F5RlEMHk

The orphanage is home to 43 chimpanzees, all of whom were either rescued from the illegal wildlife trade or were born in the orphanage. The deceased chimpanzee was named Thomas by workers at Chimfunshi, and was only nine years old when he died.

Researchers turned on their video camera after being alerted that several of the community’s females were gathered around the body of Thomas. The video shows a high-ranking female slap Thomas’s body while others stare closely at it. Researchers can only speculate that this was perhaps done to see if the deceased body would react in some way, or perhaps to check if Thomas really was gone.

While the majority of the chimpanzees surrounding Thomas were female, one of Thomas’s playmates, Pan, visited the body several times, chasing away the other chimpanzees that were touching the body. Staff at the orphanage say that Thomas and Pan had spent a lot of time together, often sitting together and playfully harassing other members of their community as they would walk past them. In the video, Pan seems to be the most distraught over the death of Thomas.

Later in the video, an elder female chimpanzee is seen using a blade of grass to clean Thomas’s teeth.

The researchers at the orphanage hesitated to use the word “mourning” when describing the chimps’ actions, but there is still much about the behavior exhibited in this video that garners human empathy — behavior that we can relate to, and that seems very human.

It’s hard not to take from the video that chimpanzees experience mental and emotional pain similar to human emotion. The video makes us sad because we are able to put ourselves in their place and feel what they are feeling in that moment.

Endangered species
Experts believe that there were once as many as one million chimpanzees on Earth. However, that number is now believed to be approximately 200,000. Loss of habitat due to deforestation, as well as the killing of chimps for the “bushmeat” industry, are largely to blame for the drastic decline in populations.

Chimpanzee populations have disappeared completely from four African countries, and remaining populations have become isolated from one another due to deforestation and habitat fragmentation, threatening the survival of the species.

Medical testing
Unfortunately for chimpanzees, being similar to humans genetically led to their use in medical research, beginning in the 1920s. Then in the 1980s, researchers began to breed captive chimpanzees to research the HIV/AIDS virus that had reached epidemic levels, leading to a population boom of captive chimpanzees housed in laboratories. According to the animal rights organization People for the Ethical Treatment of Animals (PETA), at one time, as many as 1,700 chimpanzees were used for medical research in the United States.

Life for a chimpanzee in a lab in no way resembles life in the wild. The chimps are confined to small cages barely big enough to hold them, leading to increased levels of aggression and observed behavior consistent with depression.

In 2015, the National Institutes of Health (NIH) declared that it would no longer fund projects that involved testing on nonhuman primates, which should end the nearly 100 years of such practices. It is believed that there are only 50 chimpanzees being used in medical testing currently, and those that remain will be transferred to a sanctuary shortly.

Thankfully for our fellow hominids, there are many organizations out there doing great work to help improve the lives of chimpanzees and the future of the species as a whole. But sanctuaries need volunteers and donations to help care for chimpanzees brought to them from research labs or rescued from the illegal wildlife trade. A list of places that could use your help or donations can be found here.

After all, they are part of our family.