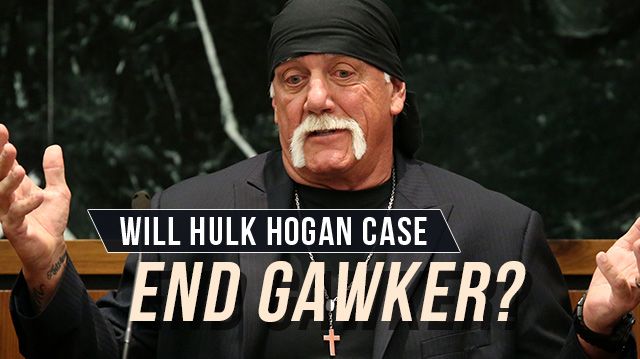 Hogan, whose real name is Terry Gene Bollea, sued the gossip website Gawker for invasion of privacy after showing him having sex with Heather Cole, the then-wife of his former best friend, Tampa-area radio shock jock Bubba the Love Sponge.

By the time Gawker.com published the 41-second video clip, alongside an essay about celebrity sex tapes by former editor Albert J. Daulerio, gossip sites TMZ and The Dirty already had reported its existence. During the two-week trial, Gawker argued that it acted within its First Amendment right to determine what was newsworthy, but a jury decided privacy outweighed Gawker’s rights. The jury awarded $115 million in compensatory damages and an additional $25 million in punitive damages in the suit against Gawker Media founder Nick Denton and Daulerio.

Gawker, a collective of irreverent breaking news blogs that attract more than 100 million viewers globally each month, may not survive the judgement and apparently is up for sale.

The back story in this case — something the jury and the public did not know — is that Peter Thiel, a billionaire Silicon Valley entrepreneur who co-founded PayPal and was one of the early investors in Facebook, spent $10 million financing the lawsuit against lawsuit. Gawker has covered Thiel in the past, including a 2007 article published in Gawker’s Valleywag blog entitled “Peter Thiel is totally gay, people” and a series of articles Gawker published about his friends that Thiel posits “ruined people’s lives for no reason.”

“It’s less about revenge and more about specific deterrence,” Thiel told The New York Times Wednesday in the first interview since his identity as a funder of the Hogan case was revealed. “I saw Gawker pioneer a unique and incredibly damaging way of getting attention by bullying people even when there was no connection with the public interest.”

Thiel said the Gawker articles are “very painful and paralyzing for people who were targeted,” adding “I thought it was worth fighting back.”

In an open letter published Thursday, Denton wrote: “Just because Peter Thiel is a Silicon Valley billionaire, his opinion does not trump our millions of readers who know us for routinely driving big news stories including Hillary Clinton’s secret email account, Bill Cosby’s history with women, the mayor of Toronto as a crack smoker, Tom Cruise’s role within Scientology, the N.F.L. cover-up of domestic abuse by players and just this month the hidden power of Facebook to determine the news you see.”

Denton also suggested that Thiel is a “comic-book villain” and an illustration of the “unaccountable power of the billionaire class.”

“Your revenge has been served well, cold and (until now) anonymously,” Denton wrote. “You admit you have been planning the punishment of Gawker and its writers for years, and that you have so far spent $10 million to fund litigation against the company.”

Denton continued, “You show yourself as a thin-skinned billionaire who, despite all the success and public recognition that a person could dream of, seethes over criticism and plots behind the scenes to tie up his opponents in litigation he can afford better than they.”

Hogan’s lawsuit is just one of several against Gawker. Charles Harder, Hogan’s attorney, has two other cases filed, one on behalf of Shiva Ayyadurai, a computer scientist, and Ashley Terrill, a West Palm Beach, Fla.-based journalist, researcher and writer.

Ayyadurai said Thiel isn’t involved in his lawsuit but commended him for backing Hogan. “More power to Peter Thiel,” he said Thursday. “He is doing a public service. He is standing behind his principles, something few people in his position do.”

At the Wednesday hearing, Gawker attorney Seth Berlin urged the court to reduce or dismiss the verdict, comparing the jury’s damage determination to awards doled out against tobacco companies after trials related to smoking deaths. He called the jury determination “one of the largest in Florida’s history and grossly excessive compared to the conduct at issue.”

Hogan’s attorney, Shane Vogt, in response argued that the judge didn’t allow Gawker to make those arguments and that Berlin lacked evidence that the jury acted with passion or prejudice.

“For the first time, the jury has put a value on privacy,” Vogt explained. “This is not like the tobacco cases. We live in a world where privacy is much more important. Everyone has a cellphone camera. There are drones out there.”

Now that the judge has determined what Gawker must pay, the case moves to the appellate stage. Gawker likely will continue to make its free speech and free press argument under the First Amendment. It also is expected to argue that that it didn’t get a fair trial.

Next steps in court

Before an appeal is filed, a judge will decide whether or not Gawker must post a $50 million bond to stay the judgement pending appeal and if Hogan can begin to conduct his own discovery about Gawker’s finances in order to collect his award. Gawker has filed a motion to argue for dismissal on the basis of fraud upon the court. A June 10 hearing is scheduled.

In the court proceeding on Wednesday, Gawker’s attorneys requested that the judge allow them to seek evidence about Thiel’s involvement, but the judge denied the request.

In his open letter, Denton vowed to use the verdict appeal to give Thiel a “dose of transparency.” He promised: “However philanthropic your intention, and careful the planning, the details of your involvement will be gruesome.”

Despite his promises to Thiel, Denton seems to know he’s been defeated. He has been soliciting bids for the sale of his company. Gawker Media confirmed Thursday it has hired an investment banker to explore strategic options, including a potential sale.

At least one unnamed party has already expressed interest in a deal valued at between $50 million and $70 million, sources told The New York Post.

Denton owns a 68 percent stake in Gawker after bringing in his first outside investor earlier this year. He sold a minority stake for $100 million to technology firm Columbus Nova Technology Partners, injecting some much-needed cash as the company fought the Hogan suit.

The value of the business was rated at $250 million around the time of that deal, but that number has since sunk, according to sources. During the Hogan trial, it was revealed that Gawker’s annual revenue was $48.7 million in 2015.