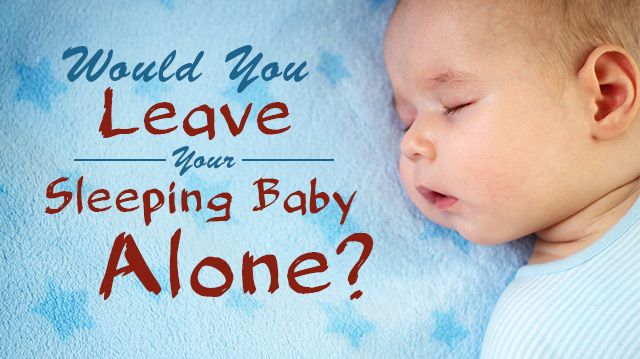 Yet another parenting conundrum has gone viral. In a recent post on Britishing parenting site Mumsnet, a user asked the site’s community members if they would ever leave their baby sleeping in the home while running a quick errand around the corner. The user mentioned that the infant sleeps for an hour at the same time, each day, like clockwork and that the errand would take around seven minutes to complete.

Like any good Internet debate, the best part is the comment section. Responses from the community ranged from a flat out “no,” which is fair enough, to some more interesting perspectives. Surprisingly, many users seemed to be taken with the possibility of something happening to the parent while she was out, even though there may be little to no risk of something happening to the baby. “What if you got mugged, or hit by a car while you were out?” one user inquires.

In response to the popular post, Today Parents put out a poll, drawing over 30,000 readers to weigh in. The results? A full 93% of people would never leave a sleeping infant alone for any period of time.

A better question than any of the above is probably: Why do we turn to the Internet for parenting advice? Later on down the comment rabbit hole (which totaled upwards of 800 comments), the mom who asked the question clarifies that she did, indeed, leave the baby home while she ran the errand: “…this seven-minute trip already happened this morning. I timed it hence knowing it took exactly seven minutes. Nothing bad happened whatsoever but I did worry. Was wondering if I had been completely out of order or if anyone else has done similar.”

Based on this second post, the mother seems to have some sense of guilt for making this decision, but is the Internet, ultimately, to blame? We are in an era of “mommy blogs,” which on one hand can be a good thing. Mothers who stay home full time or at least part time with their children have a community of other women to turn to. “Scary Mommy,” which is one of the more popular parenting blogs, sure has some popularity going.

But these types of communities are centered around a sensitive issue — parenting. As a result, whenever someone posts an article or a question that doesn’t compute with a fellow member of the blog community, it slowly morphs into an uprising from self-proclaimed parenting police. And it is these folks who contribute to the “mommy wars.” Just think about the cultural conversation regarding breastfeeding. Celebrities and average folk alike vehemently defend their personal perspectives on breastfeeding, even though the practice, quite literally, does not work for everyone.

If anybody ever asks a parenting question on Facebook, for example, you can be sure that status will get comments. Everybody will weigh in, confident they are the experts on the matter. In the instance of leaving the child alone, some may say it’s never okay to leave an infant. Others may say that, well, she shouldn’t be asking if she doesn’t want to be judged.

That may be true, but there is something kind of sad about her final line. She throws herself to the vultures and asks to be evaluated on whether she was “completely out of order” with her decision. The deeper issue here is that we have a society in which many good mothers feel strong guilt with a sense that they aren’t doing well enough — no matter what they do.

Good parents get arrested when too many bystanders intervene without understanding the situation. We have to accept that there is a spectrum of parenting and no one way to raise a child. Just consider the diverse places to bring up children: some on farms, some in the city and between. There are different levels of acceptable care for different areas and types of families. While I’m not saying leaving an infant alone is okay, I’m saying it isn’t always as simple as that. We can’t truly judge other people fairly.

Modern life is tough for many. Shaming people on the Internet is just another way to make it more difficult.