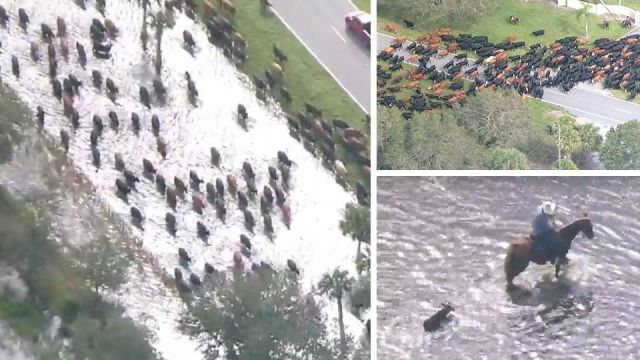 In Okeechobee County, Florida, hundreds of cows are being evacuated from a ranch after a dike broke following intense rainfall from Hurricane Irma. Unfortunately, some cows have already drowned due to rising waters.

A nearby ranch owner has offered to allow the cows to graze on his property while the other ranch dries out. Now, members of the local ranching community are pitching in to help get the cows moved. Additionally, the younger calves will be picked up by trailers so they don’t have to walk as far, as they are not in the physical condition to do so.

BREAKING WATCH LIVE: Aerials from Florida as cows are being rescued from a flooded ranch:https://t.co/Iq4HnUvKYW pic.twitter.com/Q4p8Q9cXbS

“I’m thankful for the community’s help,” says ranch owner Jim Alderman. “If the cattle had stayed where they were, they would have eventually died.” The last time the dike broke was in 2004, but there was even more water flooding into the ranch this time.

“It just was an extraordinary thing that we had over 20 inches of rain and all that water coming down and pressure against the dike caused it to break,” Alderman said.

Alderman says he doesn’t know the exact amount of cows that he has lost, but he is working around the clock to get the rest of the cows out of harm’s way.