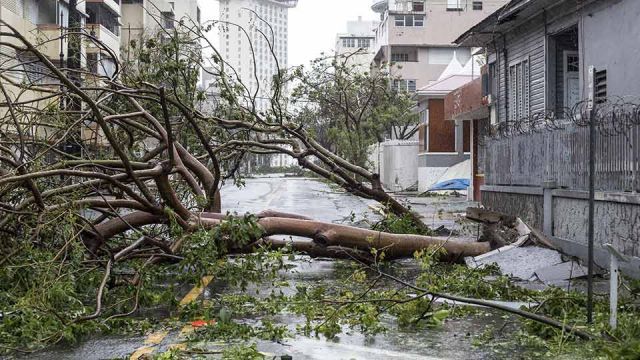 After ripping through Dominica, which took a direct hit from the storm, Hurricane Maria is now ravaging Puerto Rico. In only a matter of 50 hours, the storm went from a tropical storm to a powerful category 5 storm, which is considered unprecedented.

Puerto Rico is completely out of power, due to extreme flooding, storm surge and winds of more than 150 miles per hour. The storm weakened ever so slightly to a category 4 upon landfall. There are over 500 open shelters in the country, but the integrity of those structures is questionable, according to Governor Ricardo Rosselló.

After Puerto Rico, the storm is anticipated to hit Turks and Caicos, as well as the Bahamas, as they are in the “cone of uncertainty.”

In the age of social media, it is incredible to see all of these real-time photos and videos cropping up. But given that so many are without power, there will probably be more footage coming out later this week. Here are some top photos and videos of the storm, which capture the distress in the Caribbean:

Roofs are peeling off. You can hear the wind. This is in the metropolitan area of Rio Piedras, San Juan, Puerto Rico. #Maria #HurricaneMaria pic.twitter.com/QNu5fS7DnD

Walls being blown apart during extreme wind inside lobby of hotel #HurricaneMaria pic.twitter.com/bL9PUOEzJN

#HurricaneMaria about to make landfall in Puerto Rico and damage showing up on the streets of San Juan. pic.twitter.com/40ipBt3EFU

Hurricane Maria is a very scary hurricane. The strongest for Puerto Rico since 1928 with top winds of 175 mph.https://t.co/FKHYoFvBDw pic.twitter.com/XZBf0HUxrs

All of Puerto Rico without power amid Hurricane Maria https://t.co/gh92Qjlwow pic.twitter.com/HhymbVEh4H

Starting To receive images from Puerto Rico. My sister just sent me this. It’s from Utuado my hometown. #HurricaneMaria pic.twitter.com/STnSEI9yBm

#TSRUpdatez: #HurricaneMaria made landfall in #PuertoRico at 6:15am bringing category 4 winds and rainfall. A government spokesperson said the storm has left Puerto Rico “100% without power.” We send our prayers to everyone in the area, and ask that you all stay safe 🙏🏾 via. @cnn/ @leylasantiagocnn

Mi gente 💜💙. If there is any groups that anyone knows of who will be heading out to PR please lmk. Personal message me I am working on seeing how 2 get a team 2 gether. #PuertoRico #HurricaneMaria