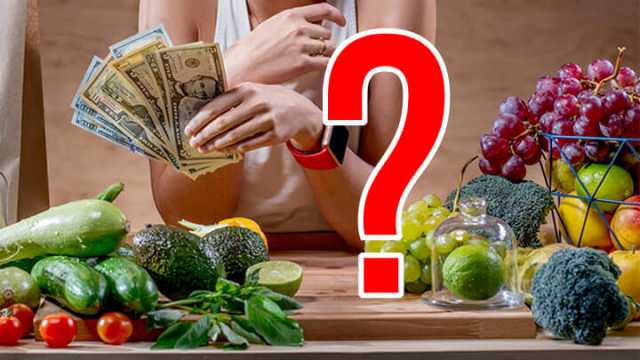 In an ideal world, we’d all eat 100 percent organic, 100 percent of the time. But is that really necessary with the higher cost of items? Here’s your guide on what to purchase organic and when to save your precious pennies and spend them on the non-organic versions instead.

What does organic really mean?

Of all the labels, organic is one of the cleanest — but it’s still not perfect. Organic products are grown or produced using only allowed substances. Plants may still be harvested with herbicides, though they’re typically less harmful than pesticides and other known carcinogens. GMOs from Monsanto are usually banned on organic farms. Livestock may still be given aspirin, vaccines and oxytocin, as needed. The processing of products may still include refined sugar, white flour, corn, palm oil and more.

As you can see, the label “organic” isn’t a catch-all. Still, it’s way better for your health, the environment and the farm workers providing your food — there’s no doubt about that.

How harmful are pesticides to our health?

Researchers have made the link between exposure to pesticides and a wide range of dangerous diseases, including cancer, diabetes, Parkinson’s, Alzheimer’s, amyotrophic lateral sclerosis (ALS), birth defects, reproductive disorders and more. In fact, a recent report by Harvard illustrated some of the most pressing dangers of conventional (non-organic) produce and why we shouldn’t necessarily trust the authorities on farming.

For starters, government authorities in both the European Union and the U.S. claim that the pesticides used on conventional farms are perfectly safe for humans. However, the data is based on animal studies, with only one pesticide being examined at a time. What happens when there are 40+ pesticides on one product? The studies just don’t account for that. “The human brain is so much more complex than the rat brain, and our brain development is much more vulnerable because there are so many processes that have to happen at the right time and in the right sequence — you can’t go back and do them over,” says the report.

Multiple reports have also shown that women exposed to pesticides while pregnant may have children with lowered IQs and ADHD. The Harvard report also links the connection between antibiotics used in livestock and cases of antibiotic resistance in humans, which is a major public health concern.

Now that we’ve got the dangers of pesticides out of the way, let’s talk about how to allocate your grocery funds. When it comes to organic produce, there are some fruits and vegetables that contain more pesticide residue — typically they are the ones with thinner skins. According to the Environmental Working Group’s (EWG) 2017 Dirty Dozen™ list, here are the items you should always buy organic:

If you’re curious, you can check the food scores of more than 80,000 items on the EWG’s website. The scores take several things into account, including nutrient, ingredient and processing concerns. The guide will provide you vital details, like whether your favorite items contain pesticides, containments, antibiotics and more.

While the list above is a great starting point, there are several other foods that you should consider buying organic. It may seem like an added cost now but think of it as a long-term investment for your health. If you can’t hit everything on the list, no worries. Just do what you can!

Not even talking about the poor quality of the animal’s life, non-organic fatty meats contain pesticides that you should stay far, far away from. For example, beef fat contains 13 pesticide residues found by the USDA Pesticide Data Program. There are five known or probable carcinogens, nine suspected hormone disruptors, four developmental toxins and five honeybee toxins. Yikes! Don’t even get us started on pork fat.

Conventionally grown berries are extensively sprayed with pesticides. Blueberries, for example, are subjected to more than 50 pesticide varieties, many of which are linked to serious health issues.

It’s not just spinach you need to worry about. The USDA has found that lettuce contains more than 50 pesticides, and collard greens contain more than 45. Other produce items on the Dirty Dozen list include celery, cucumbers, zucchini, hot peppers, sweet bell peppers and potatoes.

Apples, grapes, peaches, nectarines and cherry tomatoes are at the top of the list for the most pesticide-laden tree fruits. Peaches contain more than 62 different chemicals and apples contain more than 47, which also make their way into applesauce and apple juices. Grapes are a similar story — all the more reason to buy organic wine!

Organic coffee is worth every extra penny. Conventional varieties contain scores of herbicides, pesticides, fungicides and fertilizers that are not strictly regulated, and harmful to your health as a result. In addition, coffee growers in other countries often rely on unsustainable farming practices that are killing the rainforest. Last, these same types of coffee growers often exploit their workers in shocking practices that would be illegal here in the states.

Like coffee beans, cacao pods are frequently harvested in countries without strict laws governing the use of pesticides. By spending a little extra on organic chocolate products, there are no surprises about the chemical contents.

Items you can sometimes buy non-organic

If you need to save some dough, there are some products that are safer to buy non-organic. This doesn’t mean they don’t have pesticides, but at least the chemical residue is less than in other fruits and vegetables. Here are the “Clean 15” to remember:

Notice that many of these items have tougher skins or peels; that’s a great way to gauge how safe it is, in case you can’t remember all of the items on the “Clean 15” list.

When ‘organic’ is a total waste of money

Organic gummy bears, anyone? There are some occasions where buying organic is a total waste of money — and that’s on junk food. Just because your favorite snacks are organic and vegan doesn’t mean they’re good for you, so don’t be fooled! Marketers likely spent a ton of money trying to convince you these products are healthy. In reality, these sneaky snacks probably contain more sugar than you should eat in an entire week and come laced with additives and preservatives. Just say no!