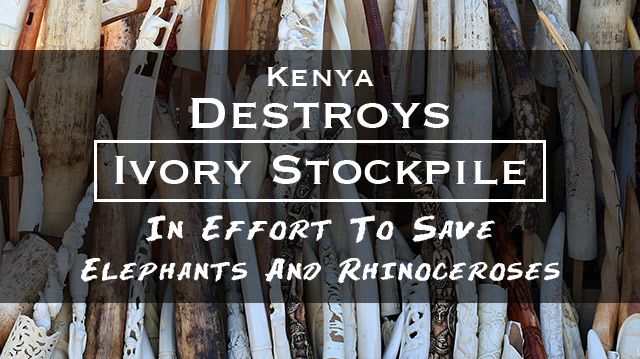 The skies above Nairobi National Park were full of ash and smoke on April 30 as the Kenyan government set 105 tons of ivory — elephant tusks — ablaze. Over one ton of rhinoceroses horn also went up in flames. On the black market, the tusks and horns had a value of as much as $172 million.

It’s the largest stockpile ever burned, and President Uhuru Kenyatta lit the ceremonial fire. In a speech, Kenyatta said, “For us, ivory is worthless unless it is on our elephants.” The ivory and horns represent the remains of 6,500 elephants and 450 rhinoceroses killed for tusks and horns.

The burning was meant to send a message to the world that Kenya will not tolerate the poaching that has decimated its elephant population. In the past decade, 70 percent of Central Africa’s elephants have been lost to poachers. The fire, which may burn for several days as it takes a long time to destroy tusks, is designed to attack the illegal trade in ivory and rhino horns.

The international commercial ivory trade was banned by the Convention on International Trade in Endangered Species (CITES) in 1989. It applies specifically to importation and exportation. But CITES does not regulate domestic markets, which are governed by national laws. A certain quota of hunting “trophies” are exempt from CITES’ international import/export ban. However, the ban does not apply to ivory obtained prior to CITES’ listing if documentation can prove the date the ivory was acquired.

The first ivory burns took place in Kenya back in 1989, when 12 tons were destroyed. The result was a severe drop in the price of black-market ivory. Other countries that have burned or crushed ivory stockpiles include:

There are approximately 20,000 white rhinos left in Africa and just 5,000 black rhinos. The latter are “critically endangered,” according to the World Wildlife Fund. Found in just four countries — Kenya, Namibia, Zimbabwe and South Africa — the overwhelming majority of rhinos are slaughtered in South Africa, which also has the largest number. In 2015, 1,175 rhinos were killed there, a rate of three daily.

Unless the demand for and subsequent poaching of ivory and rhino horns is stopped, these animals are likely to become extinct in the wild within the next few decades.

What is driving the demand for ivory and rhino horns? For the most part, the demand comes from Asian countries, where some people believe it cures a variety of ailments. None of these cures have any scientific validity, but that doesn’t stop individuals from paying almost $30,000 a pound — far more than the price of gold — for rhino horns. In Vietnam, it is believed to cure impotence, cancer and hangovers.

A newly rich China has fueled the demand for ivory, where tusks are carved into jewelry, utensils and other objects. On the street in China, ivory is worth about $1,000 per pound.

Eight countries were cited by CITES in 2013 as significant sources, destinations or transportation points for the illegal trade. These are:

While some countries have participated in ivory burns, others have held on to their stockpiles in hopes of eventually cashing in for millions of dollars. Some officials argue that money coming from the stockpile could be used for wildlife conservation.

Along with moral matters, there are practical reasons for a country to destroy its ivory stockpile. Because of their value, stockpiles require tight security and a great deal of manpower to protect them. There’s an extensive history of the guardians taking bribes and allowing criminals to steal ivory. Once burned, it’s gone and will not find its way onto the black market.

Will the Kenyan burn have its intended effect? Will it educate a new generation about the tragedy behind each piece of ivory and slow down the demand? The lives of thousands of elephants and rhinos depend on a populace hungry for ivory getting the message.