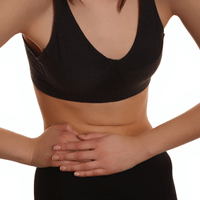 Knowing that you have appendicitis can be tricky; the initial discomfort mimics many other ailments, from stomach cramps to the flu. But if it goes undiagnosed, the risks are real.

The guitarist for the metal band Slipknot, Jim Root, dodged a bullet last year when he waited a week to go to the hospital after his appendix burst. The resulting spread of infection causes life-threatening peritonitis.

He could have spared himself serious peril if he’d opted for the latest quick and non-invasive ways to diagnose appendicitis. Ultrasound, in experienced hands, can now be used in place of a radiation-intense CAT scan to get a clear image of what’s going on with the tube-shaped sac attached to the large intestine. Doctors say that it is particularly important for children, who can then avoid unnecessary exposure to radiation.

And if that isn’t available, docs in England discovered that driving yourself over a speed bump (we kid you not!) will give you a pretty good idea of whether your discomfort is appendix-related. The physicians found that 95 percent of their patients with appendicitis said coming into the hospital parking lot over the speed bumps had caused them acute pain. And those who reported pain but didn’t have appendicitis turned out to have ruptured ovarian cysts, diverticulitis and other serious abdominal conditions.

Being able to pinpoint appendicitis with less-invasive and less-expensive diagnostic tests is great, even if some of it happens on the left side of the road.