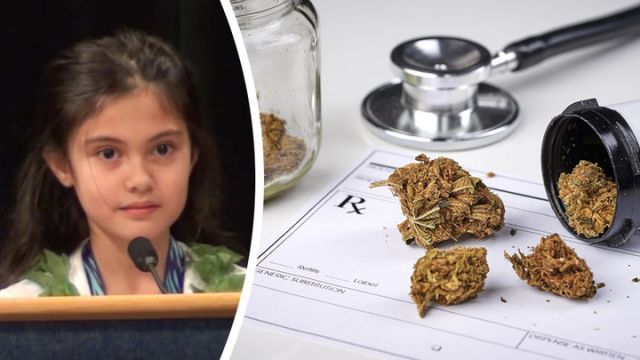 Alexis is kind to others but in her chest beats the heart of a warrior,” explains her father, Dean. He is talking about his 12-year-old daughter who donates her time and raises money to help feed the hungry even though she is also battling epilepsy, a condition that typically entails severe seizures on a daily basis.

Nothing relieves this girl’s seizures… except cannabis

Thankfully, there is a medicine that is making a tremendous positive difference in Alexis Bortell’s life. It’s a cannabis-based oil called Haleigh’s Hope, and it makes the debilitating and potentially life-threatening seizures go away.

There’s a huge problem, however, because she can’t take this medicinal oil if she’s visiting her grandparents, Disney World, a national park, or anywhere outside of her new home state of Colorado. That’s because marijuana is completely illegal under federal law.

Alexis used to live in Texas, but she and her family were forced to leave because cannabis has not been legalized for medicinal use in the Lone Star State. If she were to try and visit her elderly grandparents there, for instance, the young girl fears that she and her parents might be arrested. Alexis also worries that she could be removed from her parent’s custody and placed in a foster home if she ever travels out of Colorado.

Dean Bortell explains that when his daughter grows up “she wants to be free to choose where she lives and what she does for a living. She wants to be treated like an American citizen and not just a state citizen. She doesn’t want to have to fear going to jail every time she sees a police officer.”

While most Americans support medical marijuana — polls indicate that at least 88 percent want it to be available to patients who need it — patients continue to face numerous obstacles and legal risks for using it. I reached out to Dean Bortell for this article to ask him about the potential perils Alexis could face because she relies on medical marijuana. Here is some of what he told me:

“Unlike her friends, when [Alexis] turns 18 it doesn’t just mean she is an ‘adult’ by law, it also means she could be charged as a felon just for being sick. Think about that. No matter how many hungry people she feeds, no matter how much hope she gives people that need it, at the end of the day, it is an arbitrary age that will determine her destiny and not her actions in the near decade leading up to it. Is anyone really okay with that?  I’m not and I will stand by her side through this war no matter what. I hope every dad would do the same.”

A courageous girl stands up for the rights of millions

Alexis doesn’t think it’s right that the federal law prohibiting marijuana should deprive her of the medicine she takes or her right to travel freely as most Americans do. After all, she is not just a Colorado resident, she is a citizen of the United States.

As a result, Alexis is suing Attorney General Jeffrey Sessions. She believes that the Federal Controlled Substances Act (at least as it pertains to marijuana) is unconstitutional. The legal argument that she and lawyers are making will be hard to dismiss because she has logic, the facts and public opinion on her side. Let’s look at her case.

According to Alexis’s lawyer, Michael S. Hiller, “Our objective is to have the Controlled Substances Act as it pertains to cannabis declared unconstitutional so that Alexis… and the millions of other Americans who require medical cannabis can live healthy and productive lives.”

The Controlled Substances Act, which Congress enacted in 1970, classifies marijuana as Schedule I drug, which presumes that cannabis has no medical value and a high potential for abuse. The evidence is unequivocal, however, that neither assertion holds up to scrutiny.

Dr. Sanjay Gupta sums up the emerging mainstream scientific and medical consensus well when he says:

“I mistakenly believed the Drug Enforcement Agency listed marijuana as a Schedule I substance because of sound scientific proof. Surely, they must have quality reasoning as to why marijuana is in the category of the most dangerous drugs that have ‘no accepted medicinal use and a high potential for abuse.’ They didn’t have the science to support that claim, and I now know that when it comes to marijuana neither of those things are true. It doesn’t have a high potential for abuse, and there are very legitimate medical applications. In fact, sometimes marijuana is the only thing that works.”

Is cannabis as addictive as other drugs?

That marijuana has medicinal benefits is now simply beyond dispute. To believe otherwise is tantamount to believing the earth is flat or the sun revolves around the earth. But the notion that cannabis is more addictive than cocaine, methamphetamines and heroin, which all fall under the less restrictive (and presumably less dangerous) Schedule II heading, simply defies all the scientific evidence too.

No wonder, then, that scientists and legal experts have been arguing for a long time that cannabis deserves to be reclassified so that researchers can study it and doctors can prescribe it.

Alexis and her lawyers will probably argue that the marijuana’s classification as a Schedule I drug is irrational. In my view, they will certainly have the truth on their side here.

It will be up to the courts to say if blatant illogic disqualifies a law from being constitutional. For centuries — at least since the medieval philosopher Thomas Aquinas defined the law as “an ordinance of reason issued by a competent authority” — it is has been part of the West’s legal system to presume that in order to be just, a law must also be rational.

Alexis takes her case before the judges

Alexis and her legal team have science and reason on their side, but they also have a powerful story to tell and one of the most thoughtful and eloquent 12-year-old spokespersons to tell it.

That’s because Alexis is speaking up on social media and the airwaves not just on behalf of herself, but also millions of Americans who want to use medical marijuana to treat their conditions without fear of retribution. By the way, you can see for yourself what a formidable and sympathetic advocate she makes by checking out her activity on Facebook and Twitter:

Updated NBC story is out. https://t.co/ZO95wzuGJE

12-year-old who uses cannabis to treat her epilepsy is suing Attorney General Jeff Sessions: “We’re not suing for money, we’re actually suing for my and many other cannabis patients' freedom.”

Before trying medical cannabis, Alexis was having multiple seizures every day. She spent more time in the school nurse’s office than the classroom. Her parents slept with her at night so that they could be near her if she had a visit from the “seizure monster.”

Dean explained to me what those days were like. “Alexis was crashing and we were getting desperate. I worked in the healthcare field so I had access to the best doctors on Earth. It didn’t matter. Nothing worked. Finally, we were down to a drug [Felbatol] with a black-box warning or begin work-ups for brain surgery. Her pediatrician simplified it for us [by saying] “If you try cannabis and it doesn’t work, you will probably be right back where you started. With brain surgery, I can’t say that with confidence.”

He continued, “That was it, we were both scientists (my wife and I) so we looked at the risk vs. reward and we left [Texas]. Within two weeks we moved our entire life from Texas to Colorado in the hopes of saving Alexis’s life. So far, with the help of many great doctors, we have succeeded but epilepsy is relentless and her dosage does have to be closely monitored and tweaked but she hasn’t had a seizure in nearly three years. She is only taking Haleigh’s Hope oil twice a day and using a high THC spray called Cannatol RX for her epilepsy treatment.”

In fact, the results have been extraordinary. With conventional pharmaceutical pills, Alexis was lucky to go three days without a seizure, but with THC oil the seizures have literally gone away.

Alexis has managed to turn the tables on epilepsy, so don’t be surprised if she helps overturn the federal government’s inhumane and irrational policy towards medical marijuana.

We don’t know when the case will be heard or how the judges will rule yet, but Alexis is already taking her case to the court of public opinion in a big way. For instance, this plucky kid isn’t even a teenager yet, but she’s already the author of a book entitled “Let’s Talk About Medical Cannabis.”

By the way, when Alexis is not in school, she is busy working on a family-run farm, called OneLuv Organics, which grows organic fruits and veggies. Alexis also helps raise money and collect food to help feed hungry people through an organization called Patches of Hope, which sells a hemp soap to help support the foundation’s charitable work.

Alexis and her sister, Avery, incidentally, first started making soap to explore their artistic sides, but their efforts have since grown into something much more. As their father Dean explained to me, it’s now a project that helps get “FREE USDA Certified Organic vegetables to groups and families in need… the soap is amazing and some of the best you can buy, but the cause behind it is far better!”

As far as I’m concerned, Alexis is living proof that neither disease nor irrational public policy is a match for someone with a heart this big.

By the way, you can see Alexis tell her story for yourself in the following video: