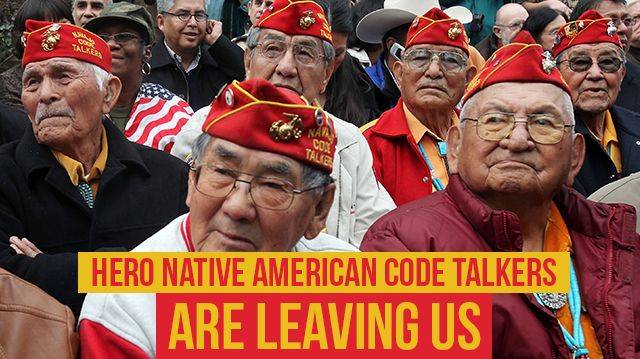 Each year we lose more members of our oldest generation, the “Greatest Generation” men and women who grew up during the Great Depression, fought in World War II and went on to parent the Baby Boomer generation that followed. Among this generation is a group of true heroes, the Native American “code talkers,” key participants in the U.S. war effort whose language skills proved vital in the heat of battle. With an estimated 40 to 70 of the original code talkers still around, we still have time to honor these heroes before they leave us.

Code talkers during World War II created a communications system that transmitted messages about troop movements, supply shipments, tactics and more right under the Japanese forces’ noses. The enemy never deciphered the code and many battles, including the Battle of Iwo Jima, were won thanks largely to such a strategic advantage.

“The code talkers changed history for World War II,” said Kat Werchouski, coordinator of multicultural programs at Northland College in Ashland, Wis., and Red Cliff tribal member. “Without this code, it’s been said that the U.S. may have lost the war.”

“The language which they forbade me to speak is the language that saved this country,” Gilbert Horn, Sr., World War II combat veteran and Assiniboine tribal leader was noted to have said multiple times throughout his life. He passed away this March at the age of 92. His statement is loaded with about as much irony as pride. As a child, he had been forbidden to use his native language in grade school.

During World War I, Choctaw and other Native American soldiers would use their native languages to communicate via phone lines. The method wasn’t extensively used, but when it was, it proved very useful, particularly in France near the end of the war.

When World War II was brewing, the U.S. Army began recruiting Choctaw, Comanche, Hopi, Cherokee and members of other Native American tribes for similar purposes. In 1941 and 1942 the Marine Corps recruited the Navajo Code Talkers to develop a code that would be undecipherable by the enemy, particularly the Japanese.

The original 29 Navajo Code Talkers developed a code to be used in battle and an official Code Talking school was established soon afterwards. Hundreds of code talkers — some only 15 years old — not only went through basic training like other recruits but also became experts in the code itself with intensive training in communications. At least 16 tribes were represented in the Army, Navy and Marine Corps.

“We never thought it would work, but we developed a code that the Japanese could not understand,” Chester Nez, the last of the original Navajo Code Talkers, said in 2013, a year before his death.

“Well, when they first got us in there for Code Talkers, we had to work [a code] out among our own selves so, we didn’t have a word for tank,” said Charles Chibitty, Comanche Code Talker, in a 2004 interview with the Museum of the American Indian. “And then one said it’s like a [Comanche words] he said, it’s just like a turtle, you know. It has a hard shell and it moves and so we called it a ‘wakaree’e,’ a turtle.”

The code for a ship was the Hopi word for “houses on water,” and a transport plane was called an atsá, the Navajo word for eagle.

Some code talkers were drafted, while others, like Gilbert Horn, Sr., enlisted. After completing his training, Horn volunteered in the fall of 1943 to be a member of an elite group fighting behind Japanese lines in Burma, known as Merrill’s Marauders. Horn and the rest of the Marauders trekked 800 miles across the Himalayan Mountains, fought in five major battles and dozens of smaller conflicts along the way.

As is often the case during battle, code talkers and white soldiers fought alongside one another, and equality for Native Americans was a welcome advancement. They hoped that after the war, things would be different, and that Native American tribes would enjoy more equality. Unfortunately, when the war ended just about everything went back to the way it was before fighting broke out. Racism still existed and non-whites were denied equality. Women went back home, losing their jobs to men who returned.

Nevertheless, the code talkers seem to remember their time in the service of the nation with pride. Gilbert Horn, Sr. hosted annual veterans’ events and worked for the advancement of the Fort Belknap Assiniboine Tribe, where he was chief, until his death. He was also a strong advocate of education. One of the buildings at the National Indian Head Start Board school on Fort Belknap Reservation is named The Gilbert Horn Sr. Early Head Start Center, a fitting tribute to a communications and combat hero.