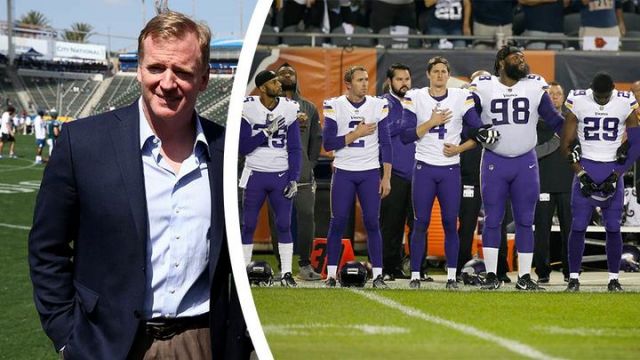 Today, in a memo written to NFL owners, league commissioner Roger Goodell announced that he thinks all NFL players should stand for the national anthem.

The owners meeting will be held next week.

“Like many of our fans, we believe that everyone should stand for the national anthem,” wrote Goodell. “It is an important moment in our game. We want to honor our flag and our country, and our fans expect that of us. We also care deeply about our players and respect their opinions and concerns about critical social issues. The controversy over the anthem is a barrier to having honest conversations and making real progress on the underlying issues. We need to move past this controversy, and we want to do that together with our players.”

Check out the full memo here:

NEW: NFL Commissioner Roger Goodell to team leaders: “We believe that everyone should stand for the National Anthem” https://t.co/KEPUJR8Avx pic.twitter.com/cEGFqycB5B

President Donald Trump has been extremely vocal about the kneeling situation, especially after his Alabama campaign rally where he called the kneelers “sons of bitches, get them off the field.”

Also, the issue gained added attention this weekend when Vice President Pence left a football game between the San Francisco 49ers and Indianapolis Colts when a saw several players on the 49ers sideline kneel during the anthem. He stated that he was given orders by President Trump to leave if any players kneeled.

I left today’s Colts game because @POTUS and I will not dignify any event that disrespects our soldiers, our Flag, or our National Anthem.

While everyone is entitled to their own opinions, I don’t think it’s too much to ask NFL players to respect the Flag and our National Anthem

Some are calling Pence’s departure a planned stunt, since several players on the 49ers usually kneel before games.

He also had a planned campaign event for a congressman in California that same day.

The protests started in 2016 when 49ers Quarterback Colin Kaepernick kneeled for the anthem.

Most NFL owners, such as Patriots owner Robert Kraft, have come out to support NFL players’ rights and have denounced the President’s comments.

Click Here to get your $1 Detox while supplies last!

However, some owners, like Dallas Cowboys owner Jerry Jones, have recently announced that they will bench players who kneel for the anthem.

Goodell’s decision to come out and say that players should stand has sparked lots of comments online.

The @NFL owners & Roger Goodell are cowards who just surrendered to @realDonaldTrump. He unmanned you, you greedy, pathetic weasels.

Roger Goodell releases a statement that says everyone should stand for the national anthem.

Too bad it was a year too late.

What are your thoughts on Roger Goodell’s decision? Let us know in the comments!