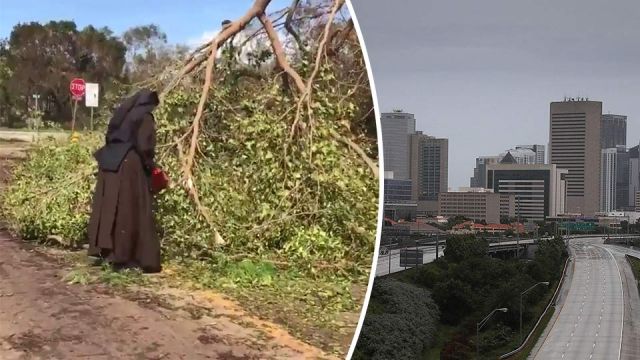 Millions of homes and business are still without power across Florida, and it could be weeks before utilities are brought back for all residents. However, it looks like some residents are taking matters into their own hands.

Sister Margaret Ann takes matters into her own hands

“There was a need and I had the means, so I wanted to help out,” says Sister Margaret Ann. “We teach out students to help other people, don’t think of yourselves,” she said in an interview.

The nun went viral after Miami Dade County Police Department shared picture and videos of her. The post included, “As we recover from Hurricane Irma, these acts of kindness remind us all that we are one community in Miami Dade County!”

Not surprisingly, the video has sparked lots of comments and shares online:

FTR: The chainsaw of Miami nun in the news for her post-#Irma clean-up work is bigger than that used by Florida’s Agriculture Commissioner. pic.twitter.com/XkQZ7iJHIJ

This chainsaw-wielding nun is showing everyone how to clean up after a hurricane https://t.co/11IYx3P4i9

A fully dress nun with a chainsaw. But actually helping roadblocks during the hurricane. Wow https://t.co/wqWVbCExKs

This nun clearing debris from hurricane Irma with a chainsaw is my new hero 👏🏻 pic.twitter.com/ZfCEz7IYNL

Nun With A Chainsaw Becomes Symbol Of Post-Irma Cleanup: ‘She Rocks’ https://t.co/mJDIB1KBj0

“Nun with a chainsaw”

The chainsaws were sitting in a closet at her school, Sister Margaret Ann said, “and they … needed to be used.” https://t.co/HAbEe52JSr

Police say the act of kindness displayed by Sister Margaret Ann has spurred others to pitch in clearing debris as well.