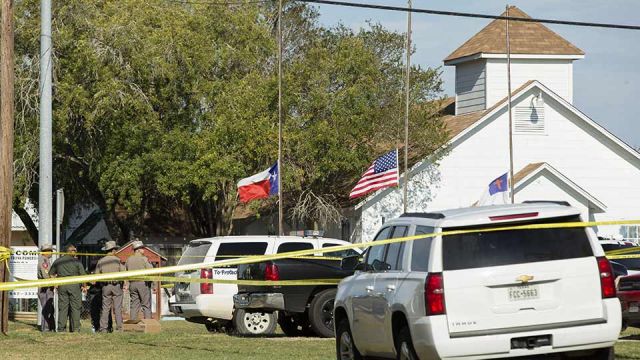 Places of worship are supposed to be safe spaces for families to gather and pray. But that no longer seems to be the case. Armed with a Ruger military-style rifle, 26-year-old Devin Patrick Kelley opened fire on parishioners of the First Baptist Church in Sutherland Springs, Texas. Within minutes, many of those inside the church were either dead or wounded. The victims ranged between ages one and 72 years old. And tragically, among the dead were three generations from one family.

Clad in all black, with a ballistic vest strapped to his chest and a military-style rifle in his hands, Devin Patrick Kelley killed at least 26 people. In just moments, the small town east of San Antonio became the location for one of the deadliest mass shooting in recent U.S. history. Of the 26 who died, 23 people were found inside the church, and two more found dead outside the church. One person died later after being transferred to a local hospital, authorities said during a press conference Sunday.

Joe and Claryce Holcombe lost children, grandchildren and great-grandchildren in the Texas church shooting. In all, eight members of their family are dead. https://t.co/rgRIZ2c9VN pic.twitter.com/D93QvUVVMZ

Losing one family member to a senseless act of murder is beyond heartbreaking. But to lose eight members of an extended family is almost incomprehensible and beyond words. Bryan Holcombe, Associate Pastor, was guest preaching Sunday morning at the First Baptist Church (Pastor Frank Pomeroy and his wife Sherri Pomeroy were out of town during the shooting).

According to his parents, Joe and Claryce Holcombe, the guest pastor walked up to the pulpit, preparing to lead the congregation in worship. Just then, Kelley entered the church and began to spray bullets at the worshipers. Holcombe was among those killed in the gunfire. Also dead is Holcombe’s wife, Karla, a Sunday school teacher.

“This is unimaginable,” Scott Holcombe, Bryan’s son, told the New York Times. “My father was a good man, and he loved to preach. He had a good heart.”

Their daughter-in-law, Crystal Holcombe, who was eight months pregnant, was also killed with her unborn child and her three children, Emily, Megan and Greg, according to the Washington Post.

Crystal Holcombe, who home-schooled her five children, was deeply involved in the church, just like the rest of her family and much of the community. On her Facebook, she reportedly spoke fondly of her children’s successes in competitions for their local 4H. She also wrote about a recent bake sale in which two of her daughters participated to benefit families affected by Hurricane Harvey.

Crystal’s husband, John Holcombe, was shot but survived the attack, along with two of their other children. John Holcombe, who teaches Sunday school and also runs the audio for Sunday services at the church, was struck with shrapnel in his leg, he told great-grandparents, Joe and Claryce Holcombe, by phone later that day. John Holcombe’s surviving daughter remained hospitalized Sunday night for observation. She was injured when another person fell on her, Claryce Holcombe said.

Marc Daniel Holcombe, Bryan and Karla Holcombe’s son, was also killed. Marc Daniel had an infant daughter, Noah Holcombe, who was one year old. She, too, is dead.

Joe and Claryce Holcombe first heard about the shooting one hour after it happened, reports the Denver Post. It was through a phone call from a member of the church they attend — a different Baptist church in nearby Floresville, Texas.

“He said there was a big shooting and he didn’t say much more than that,” said Joe Holcombe. Then, when speaking with the church’s head pastor, the devastating news unfolded.

“Bryan and Karla?” Holcombe, 86, asked the church’s pastor. “They’re both in heaven,” the pastor said.

Other victims of the shooting currently identified

Throughout the day, friends and family members in South Texas posted on Facebook, asking if anyone had heard from their loved ones. Among those killed was 14-year-old Annabelle Renee Pomeroy, daughter of First Baptist Church’s Pastor Frank Pomeroy and Sherri Pomeroy. In a text message to the Associate Press, the pastor’s wife said she lost her daughter “and many friends” in the Sunday shooting. The pastor said he was in Oklahoma this morning when the shooter opened fire in his church.

How will the town and families cope with the tragedy?

Sutherland Springs, Texas has a population of about 600 people. This senseless tragedy has wiped out about four percent of their population in a matter of minutes. And it’s not exaggerated to say that every home was affected by the shooting. How will the family members and members of the community cope? Many through prayer, I imagine.

“It kind of makes your heart drop,” Sarah Fuertez, town resident told PEOPLE. “You are taken aback… You don’t think it would happen out here, that it would hit so close to home. I see something like this in a bigger city,” she said. “It makes you wonder what is really safe. If we aren’t safe out here, where are we safe?”