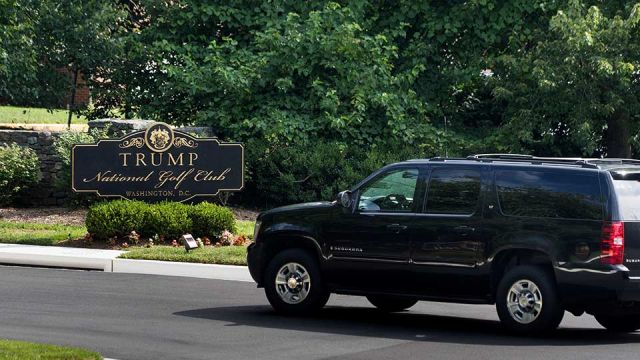 However, the woman, who was later identified as Juli Briskman, ran into problems when her employer, Akima LLC, saw the photo on her Facebook page and fired her as a result.

Here’s the viral picture of Briskman (Also the photo she made her Facebook profile picture):

Instead of trying to get #AkimaLLC to rehire Juli Briskman, let’s get her a job with a company that will support her rights.

Briskman, a mother of two, claims she instinctively wanted to show her displeasure with Trump when the motorcade drove by.

President Trump was leaving his Golf Course in Sterling, Virginia.

“He was passing by and my blood just started to boil,” Briskman told HuffPost. “I’m thinking DACA recipients are getting kicked out. He pulled ads for open enrollment in Obamacare. Only one-third of Puerto Rico has power. I’m thinking, he’s at the damn golf course again.”

Her bosses told her that is violated the company’s social media policy since it was seen as “obscene” and they don’t allow that type of material on their employee’s social media accounts.

To me, it seems like Juli Briskman was really put in a bad situation here. Although she brought it on herself by giving the Trump motorcade the middle finger, it seems like she’s getting really the short end of the stick with how the whole situation ended, in a very unjustifiable way.

We’ve all given “the bird” to someone before, and this woman just chose to express her first amendment right by flipping off the Trump motorcade while she was riding a bicycle. Personally, I definitely would not have, but it’s Briskman’s right to do so.

Political stances aside, I think that we should all be able to flip off anybody when we feel it’s appropriate, even if it’s a little disrespectful. We live in America. We shouldn’t have to worry about being fired over something so frivolous. How “politically correct” is our society sadly becoming?

That being said, I don’t think you should just walk around public making the obscene gesture to anyone for no reason.

What especially troubles me from this situation is that Briskman was fired because she posted the photo on her Facebook account and it was deemed as “obscene”.

It would be one thing if she was seen on the news by her employer, a construction company called Akima Management Services, LLC, but she was fired because it was considered “obscene” on her own social media account.

Given this information, should we all have to worry about what we post on social media because now our employers can fire us for “obscene” finger gestures?

Also, according to the reports, the construction company has multiple government contracts, and they even admitted it was part of their decision to fire her, especially since the photo went viral.

Asked if she regretted it, Juli Briskman said: “I’d do it again.” https://t.co/Gw4SUNFNyp

After being fired, Briskman said, “I’d do it again.” While I respect her desire to stand up for what she believes in, I personally would never go around giving the finger to President’s motorcades.

From a business perspective, I get that they are trying to cover themselves, but from an employee perspective, should this firing be allowed?

It’s totally wrong for them to basically ruin her life, just because she wanted to show a little humor to her friends on social media, even if you don’t agree with her reasoning for why she gave the finger.

This whole situation essentially opens a whole can of worms. If this is “obscene”, where do employers draw the line? As an employee, should I just not post anything because it might get me fired?

Others have chimed in about the situation:

Twitter shero who flipped of Trump is on Twitter, now looking for a job after she was fired for this photo. Hire @julibriskman! pic.twitter.com/CUpJCK5au5

@julibriskman
What a horrible example you are as a mother. So happy you got canned, and hope you are jobless for a long time. Karma

Asked if she regretted it, Juli Briskman said: “I’d do it again.” https://t.co/Gw4SUNFNyp

What are your thoughts on this situation? Should employers be allowed to fire employees over social media posts like this? Let us know!