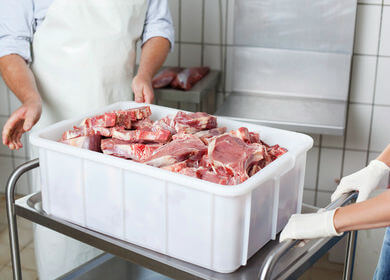 An investigation by The Washington Post found that a USDA pilot meat inspection program that is about to be implemented nationwide is failing miserably in stopping contamination.

The inspection program is designed to speed up meat processing lines by up to 20 percent. Additionally, the number of USDA safety inspectors at each plant is being cut in half, and being replaced with private inspectors employed by the meat companies themselves. Sound suspicious?

This pilot program has been used for the past decade by five hog plants in the United States, as well as by plants in Canada and Australia. The USDA has allowed the foreign plants to export red meat to consumers in the U.S., even though the inspection program is still in the experimental phase.

The experiment is failing. As many of us know, faster often does not mean better, and the pilot inspection program is evidence of this. Three of the U.S. hog plants using this program are ranked in the top 10 worst offenders for health and safety violations in America, with one of these plants being rated the worst.

Health and safety violations at these plants include the failure to remove feces from meat. One Canadian beef processing plant that was using the inspection program recalled 8.8 million pounds of beef products tainted with E. coli last fall.

In four Australian plants using the program, 11 shipments of beef, mutton and goat were stopped at U.S. ports due to contamination, including fecal matter and partially-digested food, which may contain complex – and sometimes deadly – strains of E. coli and listeria.

Despite these gross violations, USDA officials are planning to complete their evaluation of the pilot program, and are looking to expand the system to meat processing plants across the country. A similar sped-up pilot program is also underway at chicken and turkey processing facilities, and is being set up for final approval by the USDA.

Patricia Buck, a member of the USDA’s National Advisory Committee on Meat and Poultry Inspection, and the co-founder of the Center for Foodborne Illness Research and Prevention, says, “there is a lot of controversy surrounding this program. We should not be putting it out there, saying its ok for other countries to use, when it has so many flaws and when contaminated meat is coming in.”

The Washington Post reports that when interviewed, six USDA inspectors who work in the pilot plants, who chose to remain anonymous, spoke of serious concerns about the plants. Some of them said that if anyone at the plants complained or tried to slow down the process to more thoroughly inspect meat, they were, “yelled at, threatened and shunned.”

One of the anonymously-interviewed inspectors, who has over 15 years of experience, warned, “we are no longer in charge of safety. That’s what the public needs to know.”

So, what are health-conscious people who want to eat meat, but reduce their risk of contamination, to do? The answer: choose organic, grass-fed meats.

Grass-fed meat, also known as pastured meat, comes from animals raised humanely on a pasture, giving cattle and other animals raised for their meat the freedom to roam around in nature and eat their natural diets. Grass-fed meats are a safer choice, because according to Animal Welfare Approved farmers, meat from grass-fed cattle is much less likely to be contaminated with dangerous bacteria, including E. coli and listeria.

In addition, cattle are meant to eat grass, they are not meant to eat grains, so when they are fed grain they are typically also fed antibiotics to help them recover from illness caused by eating a diet that is not good for them.

One study (Russell, Diez-Gonzalez and Jarvis, 2000) compared calves raised in commercial feedlots to grass-fed calves. Results showed that the grass-fed calves had less overall E. coli contamination, and the strains that it did have were much less likely to infect humans. One potentially lethal strain, O157:h7, was found in nearly all of the feedlot calves, and in none of the grass-fed calves.

As far as meat, the safe and health-conscious choice is clear. If you want to reduce your risk of foodborne illness, as well as know that the animals you eat were treated humanely, choose organic, grass-fed meats. The USDA has proven time and time again that profits, not safety, are its top priority.