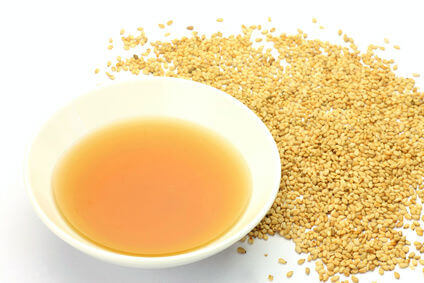 Sesame (Sesamum indicum) is one of the oldest cultivated plants on earth and has been prized for its oil for over 5,000 years. This little wonder seed is also high in calcium and magnesium and one of the most potent medicinal foods consumed today.

The Egyptians left a record of their sesame oil usage some 3600 years ago on the scrolls of the Elbers. Babylonians thought that a mixture of honey and sesame seeds, which they called halva (tahini), would prolong beauty and youth while Roman soldiers ate the same mixture for strength and energy.

When Africans came as slaves to America, they brought sesame seeds with them. They were quickly incorporated into tasty Southern dishes. These seeds have a crunchy, yet delicate taste, come in red, brown or yellow and add texture and zip to any meal.

Sesame seeds are highly resistant to rancidity, and their pods burst open when they reach maturity. This is where the term “Open sesame” comes from.

In the last twenty years, the mounting research favoring the medicinal properties of the sesame seed is beginning to make waves in the scientific community. According to research, sesame seeds contain over 36 documented therapeutic properties. With this in mind, why not keep sesame in your home medicine cabinet and your kitchen cupboard?

Here are seven reasons why you should consider this nutty-tasty food as a valuable addition to your alternative medicine cabinet.

A 2011 study published in the Clinical Journal of Nutrition demonstrated that sesame oil improved the effectiveness of an oral antidiabetic drug used in type 2 diabetes. An earlier study done in 2006 showed that when sesame oil was used as the primary cooking oil, it lowered blood pressure in diabetics with hypertension.

Inside the tiny sesame seed is a fat-soluble lignin, which has phytoestrogenic properties. Sesamin has been shown to inhibit the spread of a number of different cancer cells including:

In Indian Medicine, a practice called “oil pulling,” which involves swishing sesame oil around in the mouth for about twenty minutes each morning is said to keep tooth decay and halitosis at bay. The oil may also heal bleeding gums and dry throat. Research now shows that the oil can reduce Streptococcus mutans growth which is associated with the formation of oral plaque formation.

So, enjoy some sesame seeds on your favorite dishes or pour a little organic sesame oil on your salad, but don’t forget to keep a jar of oil in your medicine cabinet, as well. It has earned its place!

Panaseeda oil is a great blend of sesame oil plus 4 other oils: pumpkin, flax, coriander and sunflower. The 5-Seed Panaseeda Oil Blend is the only cell fuel your body needs to absolutely flourish! Learn more about Panaseeda oil here.