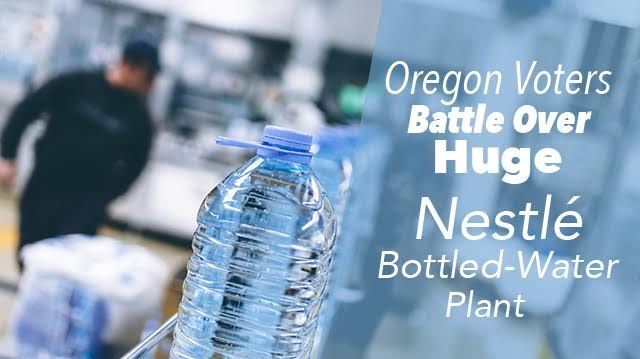 Whenever a large company tries to put down roots in a new community there is bound to be controversy. Starbucks will invariably undersell and crowd out local coffee hubs. Walmart will provide many jobs but will likely provide them at minimum wage and without benefits. The case of Swiss bottled water giant Nestlé, however, is even more contentious than the installation of a Walmart or Starbucks. Nestlé doesn’t just break ground. They extract water.

The company has been trying to find a northwest hub for years. The recently passed Hood River County Water Protection Measure was designed to ensure that the company will not build a bottling plant in Cascade Locks, Oregon any time soon. The measure passed by a county vote of 68 percent.

Though the water protection measure easily passed in Hood River County, 58 percent of Cascade Locks residents voted against its approval. Their “no” vote was effectively a vote for Nestlé.

The argument in favor of the plant are largely economic. Supporters hoped that the investment would create jobs and spur economic growth in Cascade Locks.

“Everything comes down to trying to get jobs for people,” Cascade Locks Mayor Cramblett said. “We got a great opportunity for good, full-time paying jobs with benefits, with retirement, with everything that goes along with that.” With an unemployment rate of 18.8 percent, Cascade Locks desperately needs the boost.

The city of Cascade Locks itself might have more to gain than its residents. The 50 jobs created would not be promised to locals but property tax and utility revenues are massive and would certainly be realized. City property tax income would double.

The city’s 2015 Nestlé Fact Sheet does addresses environmental and water security concerns. They posit that allowing Nestlé to bottle Portland-bound water in Cascade Locks lowers diesel use and carbon emissions by decreasing their current transportation needs. They also argue that water is a renewable resource and that theirs in no danger of becoming depleted. According to the report, Cascade Locks uses 9 percent of their local water rights. Nestlé would use an additional 11 percent, leaving 80 percent of the resource intact.

Not everyone agrees with the city’s assessment of how Nestle’s plan will impact the environment or Cascade Locks’ water security in the future. The plan is being attacked from two angles — national and local.

On the national side sits Food and Water Watch. This organization takes issue with the bottled water industry in general. The basic argument is that clever marketing and faulty advertising have convinced consumers that bottled water is better than other sources, when often it is not. The environmental consequences of bottling water, too, are devastating.

Food and Water Watch have also looked at the Cascade Locks case specifically. They concluded that water scarcity could be a real issue: “The long-term capacity of the city’s groundwater to supply this much water is uncertain, especially in light of climatic changes that are expected to impact hydrological cycles.”

Activists have risen up against Nestlé’s plan. Local Water Alliance has garnered the support of over 100 local farms and businesses. The group emphasizes that the county has seen drought conditions recently. Under these circumstances, they argue, “our water is too valuable to sell.” They also warn that setting a precedent of selling valuable water resources may lead other corporations to the area looking for a good deal.

In addition to environmental and water scarcity concerns. opponents object to the specific logistics of Nestlé’s Cascade Locks plan. First, Nestlé expects to pay only 2 cents for each 1,000 gallons of water. Given the cost of bottled Nestlé-bottled Arrowhead Mountain Spring Water (it goes online at $7.99 per 16.7 oz bottle) the city of Cascade Locks receives an absurdly small percentage of its water’s worth.

Second is the issue of democracy. An alternate plan to allow Nestlé to bottle water from Cascade Locks was submitted to the Oregon Department of Fisheries and Wildlife in 2008. The department’s decision process involves a time-consuming public interest review. The plan was challenged and held up for two years, with another four years of wait time projected.

This was too slow for Nestlé. The new arrangement involves a water rights-swap between resources currently allocated to the Oregon Department of Fisheries and Wildlife with those allotted to Cascade Locks. The swap would allow Nestlé access to the water without the level of public input currently required by the state.

Opponents of Nestlé’s agenda are outraged by this apparent effort to bypass the democratic process. The Cascade Locks city council retorts that “Cascade Locks should decide it’s own future. Our potential has been controlled by others across the state that have hindered our growth for too long.”

City administrator Gordon Zimmerman has suggested that the city may try to fight the measure. “There’s some legal precedent for county charters not being able to override city charters,” he said. “The council will consider a range of options.”

At the heart of this battle is the delicate balance between water scarcity and economic growth. There is also the sticky question of whether extraction corporations can ever be good for the communities they work in. Will Nestlé help Cascade Locks, or are they taking advantage of a city down on its luck?

Less discussed but often equally important is accountability to voters. Does one city have the right to complete control of its resources, even if utilizing that right is likely to impact its neighbors? If not, how many other cities should also be involved in the decision making process?

In Cascade Locks, these questions and more are still being heavily debated.