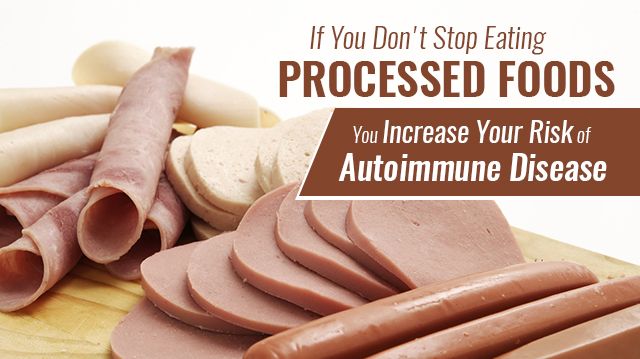 Resisting the allure of junk food is difficult, particularly after a long, stressful day. For many of us, junk food is our comfort food and we feel better after eating a meal filled with sugar, unhealthy fat, and carbs. But according to a new study published in the journal Autoimmunity Reviews, even “healthy” processed foods such as TV dinners and prepared frozen meals may be making us susceptible to autoimmune diseases.

The study found that processed foods weaken the intestinal barrier, allowing the wrong particles to enter your bloodstream. Your immune system reacts to these foreign particles, making it more likely that you will suffer from autoimmune diseases, such as multiple sclerosis, type 1 diabetes or celiac disease. The researchers showed in particular that seven food additives weakened the intestine and could lead to the development of autoimmune diseases.

The US Food and Drug Administration defines processed foods as “any food other than a raw agricultural commodity and includes any raw agricultural commodity that has been subject to processing, such as canning, cooking, freezing, dehydration or milling.” In short, anything from breakfast cereal to frozen vegetables could include these additives and be giving you autoimmune problems.

Autoimmune diseases occur when the body’s immune system attacks healthy cells, thinking they are foreign particles harming the body. This destroys healthy tissue, which may cause organs to malfunction or develop improperly.

Most food additives are intended to lengthen shelf life or improve the texture, taste and smell of processed foods. However, the study revealed that these additives have the nasty side effect of making us sick.

The study showed that these seven additives increased intestinal permeability and were associated with higher risk of autoimmune disease. The study authors concluded:

The rise in autoimmune diseases

Autoimmune diseases have been on the rise for the past several decades despite our continuing medical advances. Although far fewer people are dying and suffering from acute preventable diseases (tetanus, measles, etc.), more people are dying or suffering from chronic preventable diseases such as heart disease and autoimmune problems (celiac disease, MS, rheumatoid arthritis, etc.). This study was performed to identify possible links between autoimmune diseases and the modern diet.

The seven additives making you sick

According to the study authors, seven ingredients were consistently linked with autoimmune problems. The first three you might recognize in ingredient lists — or maybe not if you’re not up to date on all the alternative names for these — but the following four could be hidden in products and not even included on the ingredient list.

The Autoimmunity Reviews study is not the only one to suggest that the act of processing food has serious health risks. The World Health Organization released a report in October 2015 suggesting that eating processed meats is directly related to an increased risk for colorectal cancer. Numerous other studies have linked processed foods to weight gain, heart disease and type 2 diabetes.

Although further research is necessary to confirm these links, the science is showing conclusively that unprocessed, natural foods are the healthiest for the human body. Next time you think about going through the fast-food drive-through on your way home from work, remember that you could be causing yourself lifelong pain and suffering, so stop by the grocery store and make an unprocessed supper instead.