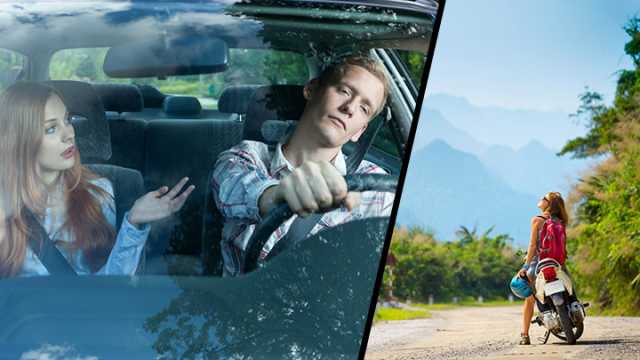 For women, traveling solo can be scary, exciting and a life altering experience. For me, it was both unsettling and invigorating at the same time. If you’re a woman and you’ve never traveled solo, there so many reasons why you should. My first solo trip wasn’t across the sea or by air. It was a simple road trip into a vacation town, about six hours from my home. Still, it was my first venture alone. And I did it, for several reasons, one of which was to tell myself that I could.

For me, growing up in a fairly-strict household, with Greek parents, meant that women didn’t travel alone. Living through a war had left my mother and father with scars and unsettling memories of what can happen at the hands of strangers. Nevertheless, I was independent, had a knack for reading people and situations — and I needed an adventure. Here’s what I found.

There’s nothing quite like waking up by yourself, in an unfamiliar town, city or country, with nothing to do but explore. It can be scary and exciting, which is what makes it so empowering. If you’ve ever sat in a movie theater by yourself or sat alone in a restaurant, filled with the chatter of surrounding patrons, then you’ve had a glimpse of what traveling alone can feel like. It pulls you out of your comfort zone but also builds your confidence. Moreover, it teaches you that you don’t always need others for entertainment, and you can have a great time all by yourself.

Quality time with yourself

Traveling solo means you can spend as much time with yourself as you want. And you’d be surprised at the things you might do alone versus if you had friends along for the ride. On my solo adventure, I decided against sunbathing on a crowded beach, during Fourth of July weekend. Instead, I opted to visit the county museum, where I soon became engrossed in reading letters from World War II soldiers who had died in battle shortly after sending those letters to mothers and girlfriends. There I stood teary-eyed reading heartfelt messages from homesick soldiers, who never managed to find their way home. The experience was profound and left me better for having experienced it.

Let’s face it: when you’re hanging out with your friends, there’s a good chance you won’t wander off to meet new friends. Yet, when you travel alone, you’re forced to talk and socialize with people you wouldn’t normally find in your own circle of friends. More than likely, you’ll meet other travelers with interesting stories to share. My solo travels through Europe connected me with locals, expats and adventure seekers from other foreign countries. All of whom I may never have met, had I chosen to travel with a group.

Any woman who’s ever watched the movie or read the book “Eat, Pray, Love” by Elizabeth Gilbert probably felt that twinge of wanderlust. We are so tied down to jobs, family, friends and significant others that traveling solo to find ourselves seems like an impossible dream. But, traveling alone gives you the opportunity to speak, act and do whatever you want without restriction. Let me tell you, if you finally decide to act on that dream and pack your bags, the feeling that will remain long after your trip is over is the absolute feeling of freedom you experienced.

The darker side of travel for women

Countries too dangerous for women to travel solo

India ranks as the as the most dangerous country in the world for a woman to travel, according to International Women’s Travel Center. The U.S. Passports and International Travel suggests that women should not travel alone in India due to the likelihood of sexual assault and harassment. It also lists possible dangers that include infectious disease, intrareligious violence and terrorism.

Western women, especially those of African descent, continue to report incidents of verbal and physical harassment by individuals and groups of men in India. Most likely places to be sexually harassed are crowded areas such as in market places, train stations, buses and public streets. The harassment ranges between lewd comments or catcalls to outright groping, which quickly escalates. Authorities report that rape is one of the fastest growing crimes in India.

Mexico is another dangerous destination for women to travel solo. While it’s true that many tourists travel to Mexico each year without incident, some experts suggest that Mexico may be worse for incidents of rape and murder than even India. Unfortunately, it doesn’t end there. The top ten worst countries for women to travel solo, according to The International Women’s Travel Center, include Venezuela, Saudi Arabia, Turkey, Colombia, Kenya, Egypt, Brazil, Honduras, Mexico and India.

The more you research about where you want to travel, the safer and happier your travels will be. Start by checking to see if there’s a travel advisory in effect for your destination of choice. For information on health conditions, check the World Health Organization’s website. Carry an Emergency Contact Card with the coordinates to the nearest American embassy or consulate in the country, in case you run into trouble abroad.

And if you don’t know the protocols for women’s dress in the countries you’re visiting, then maybe you should rethink traveling solo. A few years back, a female friend who was traveling to Saudi Arabia for business was arrested for not dressing appropriately. So, whether or not you agree with the politics or religion behind traditional women’s dress, traveling solo is not the time to make a statement.

There will always be dangers for women who travel solo — it’s a sign of our times. But potential danger can lurk anywhere, even your own backyard. So, with a little common sense, and a lot of independence, traveling alone can be safe, incredibly rewarding and absolutely empowering.