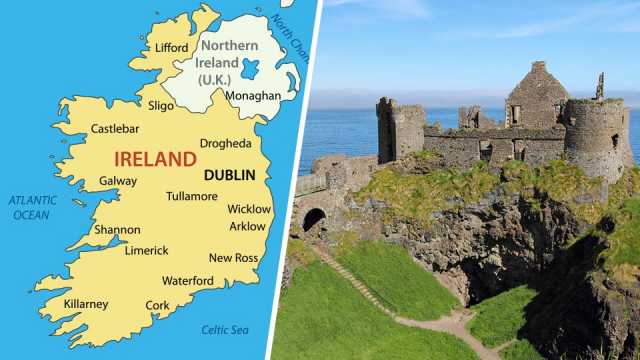 Dunluce Castle sits perched along the jagged cliffs of Northern Ireland. Its ancient walls have defied the ravages of time for centuries. Work on the structure first began in the 13th century and the fortification once held mythic and military significance for both early Christians and pagan Vikings.

Over time, parts of the castle have collapsed into the sea. But the dilapidated ruins still bear witness to ages that have long since passed.

Four years ago, I visited these awe inspiring remnants. What dramas, I wondered, unfolded in this storybook setting? I’ve heard tales of nearby shipwrecks, bloody battles and generations of Scottish royalty inhabiting the fortress. My imagination was stirred and my soul was quickened as I explored this timeless ruin. Here are five reasons you should consider visiting ruins too.

Ruins can evoke feelings of romance, mystery and the sublime. There is something about them that kindles the imagination and stirs your sense of wonder. It’s one thing to read history or see a movie depicting ancient times. However, it’s quite another to walk through medieval catacombs, dive for sunken treasure or explore ancient Mayan temples.

No doubt, visiting ruins can put you in touch with something timeless. People, just like yourself, existed thousands of years before you were born. Similarly, eons from now, people from the future may visit the last vestiges of New York, London or Tokyo.

I’m not sure if the remnants of fast-food joints, shopping malls and grocery chains will spark a great deal of admiration for the present era. But there is something both uncanny and mystical about realizing your life is but one small link in the vast chain of humanity.

Visiting ruins can put you in touch with the sacred. The pyramids of Machu Picchu, the mysterious statues on Easter Island, or the primeval stone slabs at Stonehenge — structures like these can speak to the soul on a very deep level.

Indeed, the root origin of the word “religion” means “to link back to.” In a very real sense, that’s what visiting ruins can do — they link you back to the past. In doing so, you can experience a sense of the sublime.

Ruins have been a perennial source of inspiration for poets, artists, authors and musicians. For example, the ruins at Dunluce Castle reportedly were a big influence for C.S. Lewis’s “The Chronicles of Narnia.” Similarly, Percy Bysshe Shelley’s famous poem “Ozymandias” centers on the theme of ruination. And you can check out this cool video of how a “garden of ruins” in Gatineau Park, Canada is sparking creativity in modern-day painters and photographers.

So, if you are feeling a bit stifled or are in a bit of a creative rut, then visiting some ancient monuments to antiquity might just get your artistic juices flowing again.

What clues to ancient civilizations lie hidden underground, buried within crumbling walls, or waiting to be discovered in an overgrown garden? In a related vein, how do archeologists piece together the past? The science of how history’s detectives find, catalog and ultimately interpret ancient artifacts is a fascinating education itself.

For example, scientists can examine mummified remains in order to determine what diseases afflicted the Egyptian pharaohs. Similarly, examining ancient aquifers can shed light on the theory that the Roman empire was at least partly undone by drinking lead- contaminated water.

Tour guides, on-site museums and informational displays are available at many popular ruins. These educational resources can give you a fascinating glimpse into the science and methodologies that go into archeology and historical forensics.

4. Get a break from the mundane

Let’s face it, the daily grind can drain the life out of you. Escaping your job, routine chores and family responsibilities — if only for a short time — can help you recharge your psychic batteries.

Ruins have a way of transporting you out of the mundane. When you visit sacred sites like Newgrange in Ireland, with its megalithic art, you realize that people once oriented themselves to the world in a much more natural and harmonious way. For example, burial mounds and chamber entrances are aligned to astronomical events in the most precise way.

No doubt, many ancient societies oriented themselves to astrological occurrences, such as the Summer Solstice. As a result, their activities, architecture and way of life were harmonized with the seasons, the natural cycles of life and the cosmos as a whole.

Consequently, for many ancient peoples, every day and every moment were sacred. Visiting these timeless places can lift you out of the mundane (at least for a moment). It is an experience that can restore your spirit.

Your dog just ate the newspaper, your kids are acting up and your boss just yelled at you for the second time this week. Yes, life has its frustrations. But there is also magnificence and magic waiting to be discovered.

Visiting ruins can help you put your life in perspective. Nothing lasts forever (that includes the annoying stuff). When you survey an ancient ruin you realize that your lifespan is no more than the blink of an eye when compared to eternity.

Therefore, ruins are a powerful reminder — live fully, don’t sweat the small stuff and keep exploring. This is your moment under the sun… make the most of it.