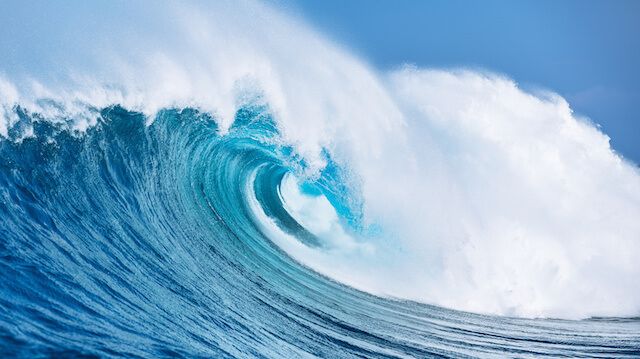 As we look for new and larger ways to transition away from fossil fuels, a relatively small player in the renewable energy sector is showing potential to become a bigger part of the clean energy mix.

While the greatest potential for renewable energy production currently lies with solar and wind, new technologies are on the verge of allowing wave power projects to be developed at competitive prices.

One of the reasons that wave power, sometimes referred to as marine hydrokinetic energy (MHK), has lagged behind other forms of renewable energy production was the failure to develop an efficient device to use on the water. There has been a vast array of designs over the years, most relying on the use of a floating buoy in the water that would often sink or be damaged. The logistical challenges of developing projects on water as opposed to land, combined with the financial losses from sunken or damaged buoys, have been enough to scare away investors up until recently.

In 2014, NASA and the Department of Energy decided they wanted to give wave power technology a little kick-start, so they helped develop the Open-Source Wave Analysis and Response Program (OpenWARP). This open-sourced software is meant to provide a model for predicting how much energy can be obtained through waves, and NASA and the DOE put out a call for coders (people who know more about software and computers than you) to help develop the software and make it more accurate and efficient.

Now anyone looking to develop a wave energy product has the ability to test their designs through OpenWARP, greatly bringing down the cost of research and development for such projects. Being able to test designs through a model instead of having to develop the project at sea, where the device could be damaged and/or sink, reduces financial risks and makes such projects more appealing for investors.

Additionally, the Department of Energy announced the Wave Energy Prize, a competition meant to provide financial incentive to companies and developers to design new wave power harnessing devices. The winner of the competition is awarded $1.5 million, while second- and third-place finalists are to be awarded $500,000 and $250,000, respectively.  Finalists have just been announced with the awards to be handed out in November, but the DOE will be rebooting the program and holding a second version of the competition after completion of the first.

Lo and behold, we now have a bunch of new designs being tested and wave energy projects beginning to grow.

The Triton system is being funded by the National Science Foundation and developed by Oscilla Power. Unlike with other models that use a heavy buoy, this Triton system uses a heavy plate that acts much like an experienced surfer does — trying to keep itself steady and afloat on top of the water. The heavy plate tries to stay still while the waves move everything around it, creating a charge that the generators attached to the plate can harness. The researchers believe that one unit could be made large enough to stretch 30 yards wide and produce enough energy to power 650 homes.

Oscilla Power currently has been graded with the second-highest score so far in the Wave Energy Prize.

Research and developers from the University of Berkeley are currently the highest-graded team taking part in the Wave Energy Prize. Their design is completely submerged underwater and blankets the ocean floor. The device harnesses the force of the above moving waves and converts it to electricity.

Other companies that have been named finalists for the Wave Energy Prize include Sea Potential, SEWEC, Waveswing America, Harvest Wave Energy and AquaHarmonics.

Not participating in the Wave Energy Prize but still gaining some traction for their project is a small start-up company, Columbia Power, currently testing out their Stingray model.   Each Stingray device weighs 700 tons and stretches 65 feet high, with the top part of the device sticking out from the water. As waves move each Stingray, the magnetic generators located inside harness the energy of the motion. The devices would need to be placed deeper than the shoreline, in water at least 200 feet deep, meaning they would be out of sight from land, giving this device an advantage over offshore wind projects that have been viewed as an eyesore by nearby communities.

The potential for wave energy globally is huge, but unfortunately,  logistical challenges and design problems have hampered our ability to really tap into it.

Estimates are that if we tapped into the energy of all the earth’s waves, we would be able to produce more than five times the world’s energy demand. While placing devices all across the planet is not really feasible, that number does go to show what tremendous potential there is in wave power. Wave energy actually contains 1,000 times the kinetic energy of wind as well, meaning devices to harness it can be much smaller — if only we can design one that will stay afloat and go undamaged at sea.

If just one of the above companies can develop a device that is efficient enough to produce cost-competitive energy, at least to nearby coastal communities, it could play a very big role in our transition away from fossil fuel–based economies. It would also make the company very rich in the process.