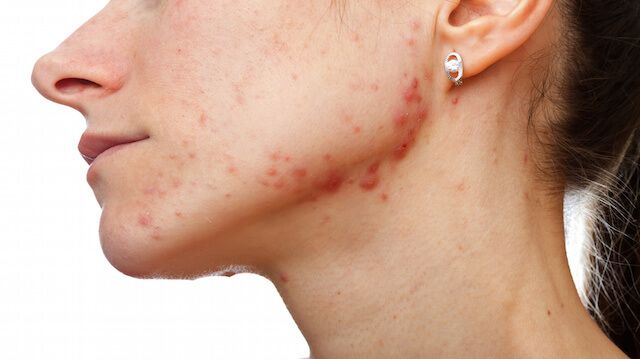 Rosacea can start out as what seems to be a rosy glow on the cheeks. Over time, little red squiggle marks appear on the skin. A quick visit to the dermatologist can confirm a diagnosis of this common skin condition.

The rosy glow of rosacea usually manifests after 30

“Rosacea is one of the most undiagnosed medical disorders — people mistake it for acne, eczema or sensitive skin,” says Whitney Bowe, M.D., a clinical assistant professor of dermatology at the Icahn School of Medicine at Mount Sinai in New York City.

Typically, rosacea makes its first appearance when you are in your thirties, and is more commonly found in women rather than men. Symptoms typically flare up during warming weather.

A poll of 852 patients with rosacea was conducted by the National Rosacea Society and revealed that 58 percent of people had their worst symptoms during the summertime.

Unfortunately, the sunburns that you suffered in your early twenties and teens can come back to haunt you. “Over time, sun damage breaks down healthy tissue that acts as a barrier between your blood vessels and the surface of the skin, and they become more visible,” says Dr. Bowe.

Flare-ups occur when blood vessels in the face expand

According to Webmd.com, rosacea is “a very common skin disease that affects people over the age of 30. It causes redness on your nose, cheeks, chin, and forehead. Some people get little bumps and pimples on the red parts of their faces. Rosacea can also cause burning and soreness in your eyes.”

A flare-up of rosacea happens when a trigger leads to the expansion of blood vessels in the face. This is what causes redness in the cheeks and other areas. “With acne, breakouts occur on the jaw and hairline, but rosacea occurs in the middle third of the face,” explained Anne Chapas, M.D., a dermatological surgeon in New York City.

The cause is unclear, but there are known triggers 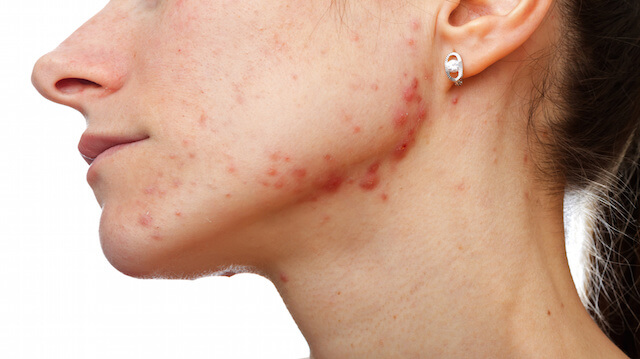 Unfortunately, the cause of rosacea remains unclear at this time. It is evidently something that brings on irritation to the skin, but does not appear to be a bacterial type of infection.

It most commonly affects fair-skinned people who tend to blush easily. There may also be a genetic component, as it does appear to run in families.

Though many people have believed that rosacea can be caused by alcohol abuse, that is not the case. However, alcohol can cause a worsening of the symptoms.

Commonly recognized triggers for a rosacea flare-up include sun and wind exposure, exercise, red wine, stress, alcohol, spicy foods, hot weather, and hot baths. People with rosacea appear to be sensitive to temperature, as swings from hot to cold, or vice-versa, often cause flare-ups of symptoms.

The following are symptoms associated with rosacea:

“One of the main issues with rosacea is a breakdown in skin barrier function,” said Dr. Bowe. “Skin may no longer be able to trap moisture, leading to dryness and itchiness.”

A culprit found in the formation of papulopustular rosacea

Research from the University of Medical Sciences in Poznan, Poland, in collaboration with Maynooth University in Ireland, found a link between the Demodex mites and papulopustular rosacea.

The number of Demodex mites were found to be 10 times higher on the faces of people with rosacea. “When they die, they release bacteria, leading to skin inflammation and pustules,” explained study author Kevin Kavanagh, Ph.D., a microbiologist at Maynooth University.

There are of course medication gels and creams that can be used to reduce the appearance of rosacea redness. Some of them contain anti-inflammatory and anti-parasitic properties. These options should be discussed with your dermatologist.

Another treatment option includes the use of intense pulsed laser light to heat and disintegrate the visible blood vessels. This method of treatment usually requires between one and three sessions to complete and should also be discussed with your dermatologist.

A natural option for treatment

There is a growing body of research that indicates probiotics may help reduce inflammation and prevent the intrusion of harmful bacteria. Research has shown oral probiotic supplements can reinforce the skin barrier. Not to mention, consuming fermented foods like miso soup, sauerkraut, kefir, and kombucha tea can give you higher levels of helpful probiotics.

If you suffer from rosacea, then the treatment methods you use should be discussed with your dermatologist. However, probiotics are natural, and they are beneficial whether you have rosacea or not. Another important thing to remember is to avoid triggers a day or two before important events.