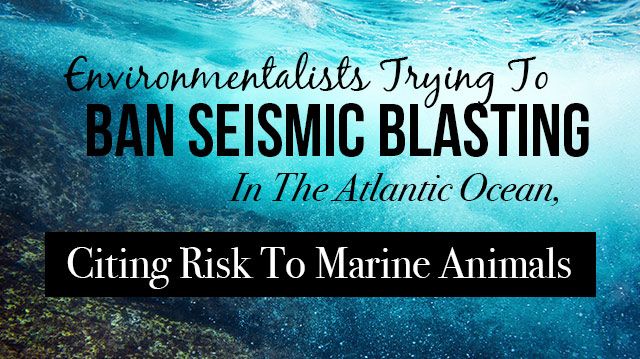 Federal officials are currently considering whether to grant permits for the largest seismic surveys ever to take place in the Atlantic Ocean. No such exploration has taken place since 1988, and current estimates of undersea oil and gas resources in the Atlantic’s continental shelf range as high as 5.5 billion barrels.

Seismic surveying uses air guns to locate and determine the size of offshore gas and oil reserves. Ships tow arrays of air guns, which shoot down high-decibel explosives for seafloor mapping. Up to 20 air guns may go off at once. The sound waves reflect off rock layers below the ocean’s surface, which allows sensors in the arrays to record them. Scientists analyze this data and create maps of possible structures beneath the ocean floor that may contain oil or gas deposits.

No one disputes that seismic surveying is extraordinarily noisy. A jet engine is relatively quiet by comparison. The noise continues nearly nonstop in the survey areas, and the testing may last a year. The noise range is vast, with the sound of a blast traveling 2,500 miles or more. That’s roughly the distance from the East to West Coast, as the crow flies.

The federal Environmental Impact Statement reports that seismic surveying could result in “moderate” impact to marine mammals and turtles. It estimates that approximately 138,000 marine animals may be injured and as many as 13.6 million could have behavioral routines disturbed. These routines include:

Oil and gas producers allege the impact on marine life is minimal. The International Association of Geophysical Contractors says, “There has been no observation of direct physical injury or death to free-ranging fishes caused by seismic survey activity.” The National Resources Defense Council (NRDC) disagrees, citing catch rate declines of various commercial species ranging from 40 to 80 percent in areas where air guns are used. The incessant loud noise can kill fish eggs and larvae, and can cause hearing loss in adult marine mammals. The NRDC and other groups are especially concerned about seismic surveying’s effect on whale populations. Among other issues, the noise can prevent whales from hearing mating calls, leading to reproductive decline in already endangered species.

The right whale was hunted nearly to extinction, with its current population numbers at only about 500 — that makes it the rarest whale in the world. These slow swimmers travel at just six miles per hour, making them easy pickings for whalers. The seismic survey would take place in their primary habitat. Seismic surveys are suspected to cause beaching of various whale species. Other whale species living in the proposed testing area include:

Many dolphin species inhabit the proposed surveying region, and they are especially vulnerable. The higher-frequency sounds emitted by the air guns may damage their sensitive hearing and communicative abilities. This, in turn, disrupts their normal living patterns and could cause displacement.

Energy producers claim their industries use mitigation measures to protect marine life. Such measures include having a trained “protected species observer” aboard every ship, whose task involves looking for marine mammals. If particular marine species are seen in an “exclusion zone” around the operation, the surveying ceases until that animal is out of the zone for a minimum of 30 minutes. One longtime oil producer said it’s unusual to encounter marine mammals in a seismic survey area, while opponents respond that the noise is driving them out of their home waters.

Although senators and congressmen from oil and gas producing states generally favor seismic surveying in the Atlantic Ocean, there’s bipartisan opposition, a rarity in Washington these days. Representatives from many states on the Eastern Seaboard oppose seismic surveying, and 31 members of Congress, Democratic and Republican, have sent a letter to federal officials requesting that such testing cease.