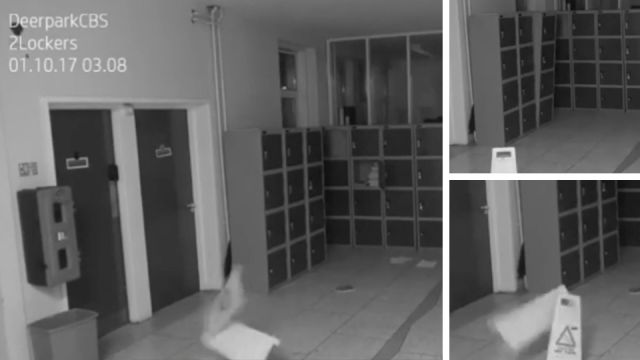 You won’t want to turn off the lights after watching this creepy video footage, which is being cited as proof that ghosts are haunting Deerpark C.B.S, a secondary school in Cork, Ireland, which was founded way back in 1828.

The footage, captured by the school’s surveillance system appears to shows lockers being rattled, doors being banged and a safety sign being mysteriously upended, all without any sign of human interference.

School officials and paranormal experts are pointing towards another explanation — disembodied spirits (seemingly agitated as you can see from the video) who are haunting an educational facility that’s been around since before the Victorian age.

School is the site of spooky happenings for years

According to headteacher Aaron Wolfe, unexplained happenings have been going on at the school for years, including an uncanny chill that seems to linger outside the religious room and peculiar noises that seem to emanate from one of the bathrooms.

According to Wolfe, “Our caretaker has worked in the school for over 30 years [and] he recalls many stories of ‘paranormal activity.’” In one incident, which Wolfe relates, “the school was hosting an exotic bird show, and the birds arrived the day before, because the organizers were worried that someone might break in and steal the birds, [so] someone had to stay overnight. [But] that person left the school in the middle of the night — they refused to stay any longer as they said that they heard ‘the last call’ being played on a trumpet — of course this could have just been the wind!”

The school, as you can see for yourself (below), is quite real and has an excellent reputation.

In addition, there is no indication that anything sinister ever happened in the school’s history, which might account for it being haunted. However, school officials recently learned that campus was built on a site called Green Gallows. As Wolfe explains, “In the 19th century, criminals were hanged here. We only found that out on Monday. The pub nearby is actually called the Gallows.”

School officials discount idea that video is a prank

The haunting incident took place on October 1 at 3 a.m. in the morning. So far, school authorities who have examined the video have discounted the possibility that fishing lines or other human interventions might explain the footage.

For instance, as Wolfe explains, “People have suggested that we’ve used a green screen, or edited someone out. I wish our school had these types of resources. Others have suggested that fishing line is used. I don’t see how fishing line could open the locker because the locker doors don’t stay closed unless the latch on it is turned. Also, the corridor is on the first floor and the window there behind the locker doesn’t open. However, anything is possible.”

School officials have not ruled a prank of some sort, but motion detectors and other surveillance technology employed by the school point more in the direction of a genuine poltergeist. In any event, students and faculty seem to be taking the event in stride. One anonymous student said, “We’re such a great school even the afterlife are signing up, lol.”

What do you think? Does that video show proof that ghosts exist? Let us know in the comments below!