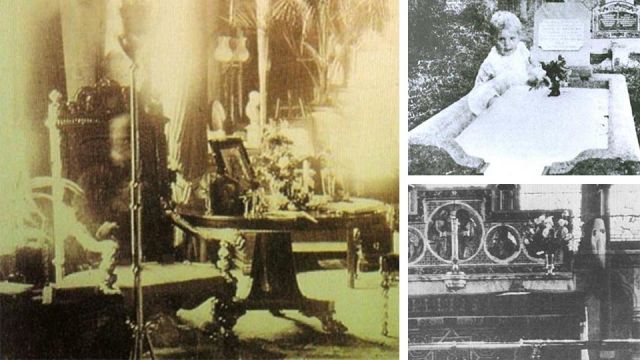 With Halloween rapidly approaching, ‘tis the season of all thingy spooky. Here are ten pictures of ghosts captured around the world. If you didn’t believe in ghosts before, perhaps you will now.

This first ghost was caught by guests at the famous Stanley Hotel in Colorado. In fact, this hotel is rumored to be Stephen King’s inspiration for writing “The Shining.”

By golly! I think I may have captured a #ghost at #StanleyHotel. #EstesPark

In this photo, a mystical figure can be seen on the top of the stairwell. Could this be a ghost? We’ll let you be the judge.

This ghost is known for wearing a brown brocade in several sightings at the Raynham Hall in Norfork, England. She was nicknamed “The Brown Lady” after this picture was released in Country Life magazine during the 1930s. The first sightings of this ghost date back to the 1830s. Several guests reported seeing the ghost at the hotel on multiple occasions, and the ghost even lead to some hotel staff leaving permanently.

♥ This is the photograph that started it all for me. My interest in #Ghosts and the #Paranormal ♥ – This portrait of “The Brown Lady” ghost is arguably the most famous and well-regarded ghost photograph ever taken. “It became one of the most famous hauntings in Great Britain when photographers from Country Life magazine claimed to have captured its image. The “Brown Lady” is so named because of the brown brocade dress it is claimed she wears. – According to legend, the “Brown Lady of Raynham Hall” is the ghost of Lady Dorothy Walpole (1686–1726), the sister of Robert Walpole, generally regarded as the first Prime Minister of Great Britain. She was the second wife of Charles Townshend, who was notorious for his violent temper. The story says that when Townshend discovered that his wife had committed adultery with Lord Wharton he punished her by locking her in her rooms in the family home, Raynham Hall. According to Mary Wortley Montagu, Dorothy was in fact entrapped by the Countess of Wharton. She invited Dorothy over to stay for a few days knowing that her husband would never allow her to leave it, not even to see her children. She remained at Raynham Hall until her death in 1726 from smallpox.” Source: Wikipedia – #Ghosts #ghost #ghostpic #ghostphoto #thebrownlady #raynhamhall #haunted #haunting #paranormal #paranormallyours

This next ghost was spotted at the Combermeme Abbey Library in 1891 by Sybell Corbet. As clearly seen, half of the man’s body is sitting in the char to the left in the photo. People now refer to this as the ghost of Lord Combermeme, who was a British commander in the early nineteenth century. He was a very prominent official in the military at the time. Interestingly enough, he eventually became Governor of Barbados and gained notoriety for moving coffins to different locations. He passed away in 1865, but this picture will reap fear in the hearts of many forever.

This next picture shows the ghost of Freddy Jackson, taken in 1919. Sadly, he was killed in an airplane propeller accident two days prior to when this photo was taken. Yet, in the back row, four people from the left, you can clearly see his head sticking out. None of the other squadron members saw him when that photo was being taken, so to see him in the back could not have been anymore shocking. Even more oddly, his funeral was that same exact day.

– Freddy Jackson. – This intriguing photo, taken in 1919, was first published in 1975 by Sir Victor Goddard, a retired R.A.F. officer. The photo is a group portrait of Goddard’s squadron, which had served in World War I at the HMS Daedalus training facility. An extra ghostly face appears in the photo. In back of the airman positioned on the top row, fourth from the left, can clearly be seen the face of another man. It is said to be the face of Freddy Jackson, an air mechanic who had been accidentally killed by an airplane propeller two days earlier. His funeral had taken place on the day this photograph was snapped. Members of the squadron easily recognized the face as Jackson’s. It has been suggested that Jackson, unaware of his death, decided to show up for the group photo. – Interesting side note: In 1935, Sir Victor Goddard, now a Wing Commander, had another brush with the unexplained. While on a flight from Edinburgh, Scotland to his home base in Andover, England, he encountered a strange storm that seemed to transport him through time into the future. You can read more about his experience in the article “Time Travelers” under the section “Flight Into the Future.” – (Source: https://www.thoughtco.com/best-ghost-pictures-ever-taken-4126828) – #freddyjackson #ghostpicture #oldghostpic #famousghostpic #ghosts #spirits #spectre #isitreal #paranormal #paranormallyours

This next ghost was first spotted in 1963 at Newby Church in Yorkshire, England. As seen, the ghost has one of the most stereotypical ghost faces most are accustomed to. The ghost was not visible to the naked eye, only in some pictures. Photo experts have debunked theories that the ghost is only in pictures because of a “double exposure” problem with the camera. That church had been around since the late nineteenth century and never had any prior history of ghosts. The ghost in the image is estimated to be a formidable nine feet tall!

This photo still freaks me out

This ghost was spotted in Queensland, Australia in 1946. A woman, who was referred to as Mrs. Andrews, was going to a cemetery to see her daughter’s grave. After she got the image developed, she was in utter disbelief when she saw the ghost. When doubters said it was just a double exposure issue, Mrs. Andrews fiercely argued that there was no other kids nearby. The woman also claims that the baby looked far different than her child.

This photo was taken at the Fleet Air Arm Station in Yeovilton, Somerset, England. At first, the woman thought it would be cute to take a picture of her sitting in the front of a helicopter. No one was sitting next to her when the picture was taken, but as can be clearly seen, a figure is seated next to her. Also, the woman notes that she felt extraordinarily cold sitting in that seat, despite it being incredibly hot outside that day. It is not known whether a pilot died in that aircraft.

This ghost could not be any more eye opening for non-believers out there. It was taken by graphic designer Neil Sandwich in 2008 in Hertfordshire, England, in what was supposed to be a harmonious wedding photo event. The ghostly, white figure appears to be a child peeking past a wall.

#FarmGhost they say its real… it eats all the animals in the farm and only appear at night… what do you think Fact Or Fiction….

See those eyes in the left upper corner of the photo? Yes, that would be a ghost known as the Amityville Ghost. This was spotted in 1974, at a house where a madman murdered his father, two brothers and sister. Years later, a family bought the home because they loved the garage, pool and waterfront location. However, they reported seeing paranormal activities like slime coming out of keyholes. Eventually, due to the utter creepiness, they were forced to move out and hired a investigation team to search it. During their search, they were able to capture this frightening photo.

Have you heard the legend of the Amityville Ghost Boy? Look to the left corner of the frame and you’ll see a child with glowing eyes. This photo was one of hundreds taken with infrared film during the night inside an infamous ghost house. The whole building was closed off during this time. 📷:@spookyspectres #Amityville #Amityvilleghosts #ghoststory #investigation #spooky #scary #lanternghosttour

Last, but certainly not least, is the Tulip Staircase Ghost. This historic looking picture was taken in 1966 in Canada at the queen’s house. A retired couple traveled there due to rumors of the house being haunted. While standing next to the Tulip Staircase, the husband took a photo. After it was developed, the couple noticed the ghostly figure. The stairs have a “no admittance” sign and the ghost is supposedly a maid who died nearly 300 years back.

@Regrann from @the_haunted_hunts – #TulipStaircaseGhost White Rock, British Columbia, took this now-famous photograph in 1966. He intended merely to photograph the elegant spiral staircase (known as the “Tulip Staircase”) in the Queen’s House section of the National Maritime Museum in Greenwich, England. Upon development, however, the photo revealed a shrouded figure climbing the stairs, seeming to hold the railing with both hands. Experts, including some from Kodak, who examined the original negative concluded that it had not been tampered with. It’s been said that unexplained figures have been seen on occasion in the vicinity of the staircase, and unexplained footsteps have also been heard. Interesting side note: This photo isn’t the only evidence of ghostly activity at the Queen’s House. The 400-year-old building is credited with several other apparitions and phantom footsteps even today. Recently, a Gallery Assistant was discussing a tea break with two colleagues when he saw one of the doors to the Bridge Room close by itself. At first he thought it was one of the lecturers. “Then I saw a woman glide across the balcony, and pass through the wall on the west balcony,” he said. “I couldn’t believe what I saw. I went very cold and the hair on my arms and my neck stood on end. We all dashed through to the Queen’s Presents Room and looked down towards the Queen’s Bedroom. Something passed through the ante-room and out through the wall. Then my colleagues all froze too. The lady was dressed in a white-grey colour crinoline type dress.” Other ghostly goings-on include the #unexplained choral chanting of children, the figure of a pale woman frantically mopping blood at the bottom of the Tulip Staircase (it’s said that 300 years ago a maid was thrown from the highest banister, plunging 50 feet to her death), slamming doors, and even tourists being pinched by unseen fingers. #GhostHunting #paranormal #MostHaunted #GhostAdventures #Haunting #RealGhost #Ghost #Spirit – #regrann

Do you believe in ghosts? Did these photos help convince you at all? Let us know in the comments!