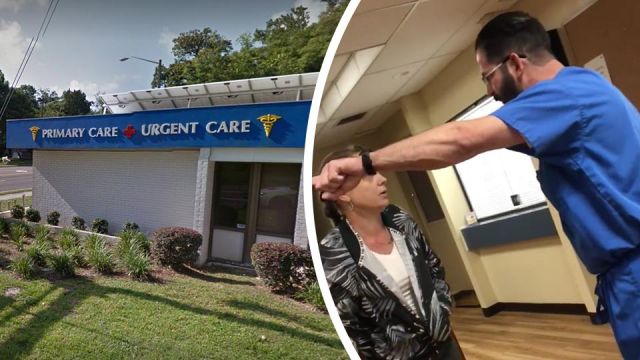 A Gainesville doctor is currently under criminal investigation after telling a patient who was reportedly “severely sick” to leave, in an extremely vulgar manner. What sparked the feud was when the patient, Jessica Stripe, was told to leave after telling the doctor that her wait time was extraordinarily long.

Stripe claims that she had a 6:30 appointment and by 7:45 she still wasn’t seen. The only medical attention they gave her was a routine urine test to see if she was pregnant, which she confidently believed she wasn’t.

After being posted to Stripe’s Facebook page, the video has gone viral with nearly 400,000 views. Her daughter recorded the video. Stripe reported that she was in severe pain and throwing up in a trash can that night.

Check it out for yourself:

Stripe further delineated her claims on her Facebook the following day.

With all this being said, there are always two sides to every story.

The hospital, Gainesville After-Hours Clinic, posted their own recount of the story on their Facebook page.

They argue that Stripe was being abusive to the clinic’s staff, and that she had requested her deposit back, due to the fact that she was planning to leave before the doctor told her to do so.

The incident has been met with mixed reactions online

Facebook user Michael Agree wrote, “And now you know the rest of the story. She’s not the first patient to think they should be seen right away and proceed to b*tch snd scream at everyone.”

Healthcare is this country is truly going down the tubes.

Facebook user Sherri Bannister wrote, “You can file charges because it was without permission no bruises have to be visible go to state attorney and call supervisor now!”

The doctor could be facing some serious legal trouble since there are multiple statues in Florida state law that say a doctor can’t turn away sick patients under most circumstances.

What are your thoughts on the situation? Who was in the wrong? Let us know in the comments!