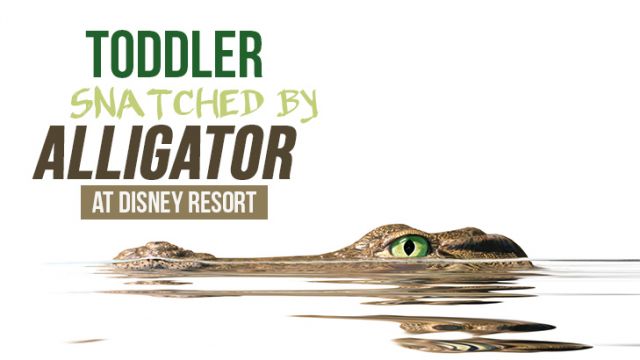 Another incredibly sad story emerges from Orlando after a toddler is attacked in a lagoon at a Disney hotel near Orlando. Despite the father’s efforts to save his 2-year-old son from the alligator’s jaws, the boy was taken. UPDATE 8:34pm ET: Officials now say the boy has been found nearby and is intact but dead, likely drowned by the same gator.

Gator swims away with child

The nightmare continues for the parents of a toddler who was dragged away by an alligator at the Seven Seas Lagoon. The 911 call came in just after 9:15 p.m., according to Orange County Sheriff Jerry Demings. The 2-year-old, on vacation from Nebraska with his parents and two siblings, a 4-year-old and an 18-year-old, was attacked by an alligator while playing  in about a foot of water. Signs posted around the lagoon warn that the area is not for recreational swimming.

Per eyewitness accounts, the family was out on the beach area at the lake’s edge when the alligator snatched the toddler, later identified as Lane Graves. A nearby lifeguard was alerted but could not rescue the child in time. The father struggled to free his son from the gator but was unsuccessful and sustained minor scratches to his hands in the effort, Demings said. The boy’s mother also went into the water trying to find her child, he said.

Authorities have not been able to determine how large the alligator was but it’s thought to be between four and seven feet in length. Meanwhile, more than 50 law enforcement officers, including two marine units, actively search the lagoon.

Florida is no stranger to alligator attacks. Just a week ago, a gator was found with a human body in its mouth, reports WFLA News Channel 8. After a 911 call, officers arrived to find an alligator with a person in its mouth. But the victim had been deceased for more than a day, according to Gary Gross, a Lakeland police spokesman. It’s uncertain how the man died.

The alligator released the body, allowing police to pull the deceased person from the water. According to the report, Florida Fish and Wildlife officers and trapper Scott Barbon were on the lake searching for the gator. If found, they will test the gator for human remains.

Several days earlier, two fisherman discovered a gator eating human remains in a South Florida canal. One or more gators fed on the remains, according to Sgt. Pablo Castaneda in an interview with CBS Miami. The alligators are not suspected of killing the person, whose gender had not been determined, according to the Sun Sentinel, so police are treating the investigation as a homicide.

Why would an alligator attack?

Alligators don’t normally attack unless provoked. But it’s clear through witness accounts that the toddler had not provoked the gator and did not know that the beast was even in the water nearby. You have to assume that the alligator was hungry. While it is very rare to be attacked by alligators in Florida, according to the Florida Fish and Wildlife Commission May and June is mating season for alligators, which means increased hunger and higher risk of attacks.

Fending off an alligator attack seems almost impossible, particularly for a child. Alligators primarily hunt at dusk or during the night — exactly when the child was in the water — and lay motionless in wait for prey. Their target is determined primarily by size, according to The University of Florida. If an alligator’s prey is too large to be swallowed at once, the gator will submerge its kill, pinning it under a log or anywhere it can be wedged for safekeeping.

How to prevent attacks

Stay alert where alligators may be present. While the sign at the Disney resort indicated the waters were not suitable for swimming, it’s unclear whether the sign also indicated the presence of gators. As a Florida park ranger once put it, if in Florida you come across water deep enough to submerge a single gator, you should assume that at least one gator is present.

Keep in mind, it’s illegal to feed alligators. Like with bears and other wild animals, when humans feed gators it causes the them to lose their natural fear of humans and to associate us with food.

Authorities do not plan to stop the search until the toddler is found or recovered. Helicopters, sonar, marine units and an alligator trapper are being used in the rescue effort, and divers are on standby.