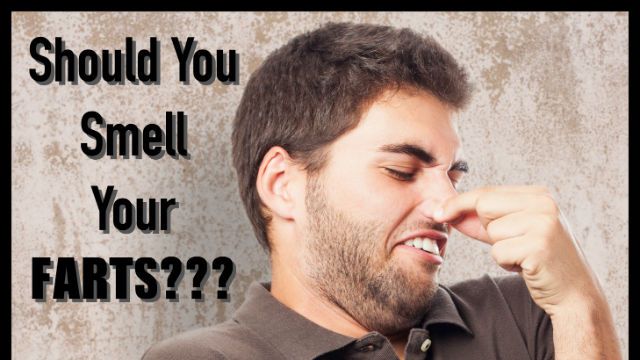 Ok, now it’s time to be totally honest with us…. do you smell your farts? Come on, just every once in a while, do you just take a little whiff? Well, if you don’t you are probably among the minority.

Farts are a way of life and a part of living. Have you ever met those people who tell you that they never, ever, ever fart? Well, this just isn’t true. They are most likely firing them off during the night when no one can hear them. Truth be told, we all fart. In fact, the average person releases 14 liters of farts per day. And, while you may think that men fart more than women, the truth is, women who eat the same foods as men actually pass more gas – they just might not admit it.

Farting is, at times, embarrassing, funny or just plain stinky… but no matter how you slice it, it’s necessary, unless you want to blow up and burst. Well, not really. Some farts are just the release of trapped air that has accumulated during eating and drinking. Other farts may be due to chemical reactions in our gut or by air leaking into our intestines from our blood.

Many people wonder why some farts have a terrible odor. The more sulphur-rich your diet is, the more your gas will stink. Foods like beans, cabbage, eggs and cheese can result in pretty stinky farts. For all you soda drinkers out there, here is one more reason to stop drinking it: it also makes your farts smell.

Farts have now become the topic of a rather popular study, published this summer in the Journal Medicinal Chemistry Communications. Researchers suggest that exposure to the compound which the body produces as bacteria breaks down food causing gas, hydrogen sulfide, could prevent mitochondrial damage.

Although the gas is noxious in large doses, scientists from the University of Exeter in England discovered that cellular exposure to smaller amounts of hydrogen sulfide, found in flatulence and rotten eggs, may prevent mitochondrial damage. This could have future implications in the prevention of strokes, arthritis and heart disease, among other ailments.

Basically, some rather credible people are saying this research means that smelling farts could prevent disease and even cancer. Imagine that!

Dr. Mark Wood, a professor at the University, said in a statement: “Although hydrogen sulfide gas is well known as a pungent, foul-smelling gas in rotten eggs and flatulence, it is naturally produced in the body and could in fact be a healthcare hero with significant implications for future therapies for a variety of diseases.”

Another University of Exeter professor, Dr. Matt Whiteman, who worked on the study, said in a statement that researchers are working on replicating the natural gas in a new compound, AP39, to reap its health benefits. The scientists are reportedly delivering “very small amounts” of AP39 directly into mitochondrial cells to repair damage, which “could hold the key to future therapies.”

The question may be: is being exposed to hydrogen sulfide in flatulence really worth the potential health benefits? Who knows, maybe you now have an excuse for smelling farts…