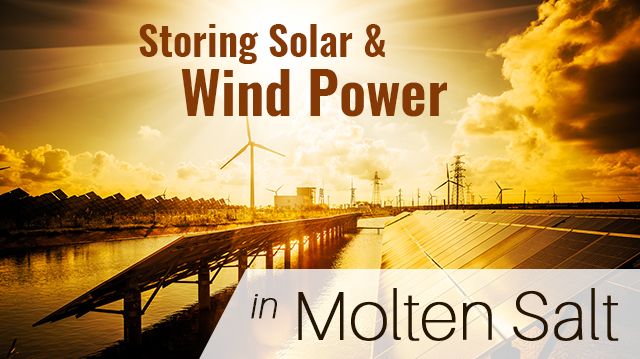 Alternative energy development has become major new policy goal of the United States, and innovators throughout the country are taking this goal seriously.

Sustainable, reliable alternative energies require more than just generating power. It also needs to be stored. Gas is easy. It is already in a storable form. Solar and wind, however, are a challenge. This is power that doesn’t come prepackaged in a unit of storage ready for use at any time.

For alternative energy to become a primary source of our energy, we need to develop inexpensive, reliable methods of storage. New manifestations of battery storage may eventually provide the answer, but several companies are working on more innovative approaches.

SolarReserve is banking on salt. Crescent Dunes is an 110-megawatt energy facility with ten hours of built-in storage capacity. That means that the facility can continue to provide 110-megawatts of energy for ten hours without additional solar power input. That adds up to 1,100 megawatts of stored energy. The magic ingredient in this groundbreaking system is molten salt.

According to the company, salt is kept at an astounding 1,050⁰F during the day by solar panels. Though the temperature falls once the sun isn’t at its peak, the salt remains incredibly hot until energy is needed, at which point it is used to create super-heated steam. The steam powers a turbine, which in turn produces power. The system can be initiated at any time — night or day, rain or shine.

Though their technology is the clear salt-tech frontrunner, SolarReserve isn’t the only company considering the energy storage potential of this common mineral. Researchers at the University of Australia recently won the country’s prestigious Eureka prize for their phase-change energy storage technology. This time around, frozen salt is the key ingredient. Extra energy is used to freeze salt coils. Then, when the energy is needed, the salt melts and the energy is released. Priced ten times lower than a standard battery, this tech is being touted as a cost-effective way to supply small-scale energy needs.

Beyond salt, flywheel and compressed air storage technologies are also being explored. Flywheel tech uses kinetic energy to store excess energy. Though traditionally the amounts of energy stored could be used up in mere minutes, Amber Kinetics has recently pushed flywheels up to four hours of storage capacity. This has spurred funding and a partnership with Pacific Gas and Electric Company.

The Dinorwig Hydroelectric plant has been using pumped storage power since the 1980s. Water is pumped from a low lake to a higher lake during times of low energy demand, to be released when a surge in energy generation is needed. Compressed air storage technologies are the next step in this line of thinking. Air is compressed and stored in underground caverns until needed, when it is released and the resulting energy is harnessed.

These are only a handful of the many energy storage ideas buzzing around. In 2014 alone, an estimated 362.8 megawatts of new energy storage projects were announced. Interest and innovation is only growing.