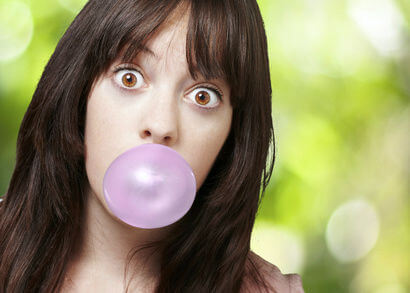 Because most people do not swallow gum, they pay relatively little attention to what is in it. However, the stuff your gum is made of moves very quickly into the bloodstream because it is absorbed directly through the walls in the mouth.

In addition, these ingredients are not filtered, like the food we eat, during digestion. For this reason, you need to know what is in your gum and how it is potentially impacting your health.

All commercial gum products contain mostly the same ingredients with just slightly different labeling, which can be confusing.

What’s in Your Gum?

Here is a list of the five most dangerous ingredients found in commercial gum:

Gum base – This is the foundation of all chewing gums and is a blanket term for a number of ingredients that manufacturers put into gum. The ingredients of gum bases are supposedly “trade secrets.”

The problem is that no one really knows what they are. Gum manufacturers will tell us that gum bases contain elastomers that provide elasticity, resins to bind and soften, plasticizers to help blend the base, fillers for texture and anti-oxidants to prevent gum oxidation on the shelf. It is just hard to know for sure what a plasticizer, for example, really is.

One Chinese company revealed that their gum base is made of many things including glycerol ester of rosin which is often extracted from the stumps of pine trees and used to create varnishes.

Another ingredient in the base is talc which has been implicated in lung and ovarian cancer with transdermal use. A third very disturbing addition to gum base as revealed by Wuxi Yueda Gum Base Manufacture Co, Ltd is polyvinyl acetate which is also known as “carpenter’s glue” or “white glue.”

Aspartame – Aspartame is one of the most controversial food additives of all time. The Food and Drug Administration called aspartame (NutraSweet) safe in 1974 after it assessed data submitted by G.D. Searle Co., the maker of the chemical cocktail. When a psychiatrist found that aspartic acid, a key ingredient in aspartame, created holes in the brains of mice, an investigation into Searle’s claims began.

Corrupted studies and falsified claims were revealed during the investigation. The FDA agreed to further investigate Searle by grand jury, but US Attorney Thomas Sullivan and Assistant US Attorney William Conlon did not follow up. Conlon found a job at the law firm representing Searle. Hmmm, kind of suspicious, don’t you think?

Well cited independent research shows that phenylalanine, the main ingredient in aspartame, is a powerful neurotoxin, especially for those who suffer from the genetic disorder phenylketonuria (PKU). Phenylalanine is an amino acid that is found in a number of proteins and also in bananas. Dr. Janet Starr Hull, author of the book “Sweet Poison”, states that amino acids should always be eaten in the way they are presented in nature, not extracted and processed.

When amino acids are isolated they become dangerous to health, and too much of this amino acid can cause overstimulation of neurons and cellular death in the brain. Conditions such as ADD and ADHD, as well as behavioral and emotional disorders have been linked to high levels of phenylalanine in the brain.

BHT – Butylated hydroxytoluene is a preservative that has been linked to cancer and has been banned in Japan and the United Kingdom. Benjamin Feingold linked BHT to hyperactivity in children and other studies point to its role in both kidney as well as liver damage. 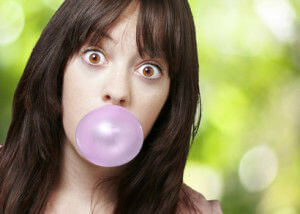 Sugar Alcohols – Maltitol, sorbitol and mannitol are all sugar alcohols that are generally made from sugar. They can increase blood sugar just as much as sugar. The deceptive “sugar-free” claims that manufacturers make lures customers in and makes them think that their gum is healthy.

Gum that contain sugar alcohols are marketed to improve dental health, however sugar alcohol is more processed than white sugar. It is believed that gums containing sugar alcohol increase inflammation more than regular gums. Some people also experience bloating, diarrhea and cramping as a result of chewing gum with sugar.

Options: If you are not quick to give up your gum chewing, try natural gum made from chicle, a tree found in Central America. Natural gum is available in most health food stores.