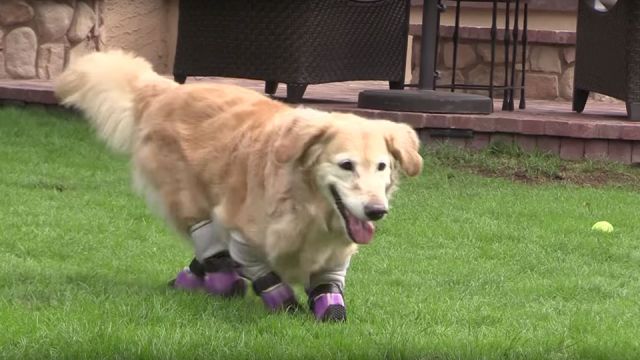 Hope has a furry tail, a warm nose and the most adorable pair of eyes you’ve ever seen. They belong to Chi Chi, a 3-year-old golden retriever who is melting hearts across the Internet.

A special needs dog who is brightening lives

Chi Chi is a rescue dog who is proof positive that good can be plucked out of even the worst of circumstances. You see, Chi Chi’s life began in the worst way — she was left for dead in a trash bag outside a Korean meat market. She was found by a rescue group, but she was in such bad shape that vets prepared to euthanize her.

Yet something about the way the scrawny pup wagged her tail that made them reconsider. Unfortunately, her paws were so badly infected that the doctors would be forced to amputate all four of her limbs. That’s when they gave her the name Chi Chi, which is a reference to the Christian motivational speaker, Nick Vujicic, who was born without any limbs.

Ultimately, Chi Chi was adopted by a couple in Phoenix, Arizona, and fitted for custom-made prosthetic limbs, which allow this adorable pooch to run and play just like any other dog.

Bringing out the best in people

As you can see, Chi Chi isn’t about to let her rough beginnings — or a disability — get in the way of enjoying life. She loves chasing toys, swimming and snuggling. But what makes Chi Chi really special is the way she is giving back and inspiring people all over the world. That’s because Chi Chi has become a certified therapy dog so that she can help veterans confronting disabilities and children about the pernicious effects of bullying.

Elizabeth Howell, who adopted Chi Chi, explains her ability to touch the hearts of virtually everyone she meets, “Dogs aren’t judging. They love everyone the same. Somehow dogs can just reach a person in ways humans can’t. Is that compassion? Understanding? I don’t know. But it’s really special to be able to see. I can’t tell you how many people meet her and just start crying.”

Chi Chi is inspiring countless people with both her remarkable story and her affectionate manner. Today, she has over 45,000 followers on Facebook. Here’s a quick look at how she’s touching lives on social media:

I have exciting news to share! I’d like to introduce you to my friend Owen. He is a courageous and brave young boy who…

It’s amazing what happens when people come together to do something wonderful for someone very special! Everything is…

What can you do to help animals in need?

According to Kelly O’Meara, at the Humane Society, over 2.5 million dogs are slaughtered for food each year in South Korea alone. Animal rights organizations are incensed that the practice of killing dogs for meat continues in South Korea and some other Asian countries.

If you’d like to learn more about efforts to ban the cruelty to animals and help rescue them as well, then here are some organizations you can contact: The Humane Society International and Animal Rescue Media and Education (ARME).