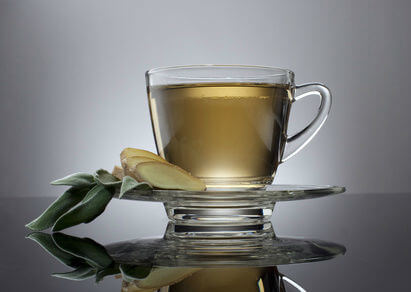 The cooler weather is settling in and the flavors of fall are popping up everywhere. While there are certainly several spiced beverages on sale at seemingly every coffee stand, most of these overly sweet and highly processed drinks lack any benefit of the herbs and spices they supposedly incorporate.

Ditch the sweet stuff and instead take advantage of these three autumn herbs with some seasonal teas that are not only delicious tasting but healthy for you.

Ginger is undoubtedly one of the most effective herbs in treating digestive troubles. For centuries this potent herb has been utilized as a treatment for various illnesses and has been an effective treatment for motion sickness and pregnancy-induced morning sickness. Ginger also has a wide range of anti-inflammatory benefits and has been shown to combat ovarian cancer cells and inhibit the growth of colorectal cancer cells as well.

For a tasty fall treat try this easy recipe for ginger cinnamon tea.

Simmer the ginger and cinnamon in a saucepan for about 20 minutes. Strain through a sieve or tea strainer and add honey to taste.

Commonly used a mere garnish, parsley is an extremely concentrated source of volatile oils and flavonoids. The unique blends of volatile oils are proven tumor inhibitors as well as anti-carcinogens while the flavonoid, luteolin, is a powerful antioxidant.

Even more, parsley is a potent source of vitamins A, C, K and folic acid. The herb offers a wide range of health benefits including aiding female reproductive health, stimulating digestion, acting as a diuretic and promoting heart health just to name a few.

Rather than utilizing parsley on your plate, incorporate it into this autumnal cinnamon apple tea recipe for an added immunity boost.

Dice the apple and mash lightly with a fork into the bottom of a mug. Add the rest of the dry ingredients on top. Boil the water and add to the mug.

Allow to sit for five minutes. Straining is an option but you can also allow the apple and herbs to remain in the bottom of the mug for stronger flavor.

This distinctive herb is most commonly used in Indian cooking. However, medicinally it is often used to treat indigestion, fight tooth and gum disease, battle bad breath and has been effective at treating urinary tract problems as it acts as a diuretic.

Furthermore, the volatile oils found in cardamom have been shown to effectively treat depression, and due to its potent smell, cardamom is often used in aromatherapy.

This warming tea incorporates the flavors of the fall while offering a wealth of medicinal properties.

Place the cardamom, peppercorns, cloves, cinnamon and ginger in the water and heat (without boiling) for 30 minutes. Strain and add raw honey to taste.