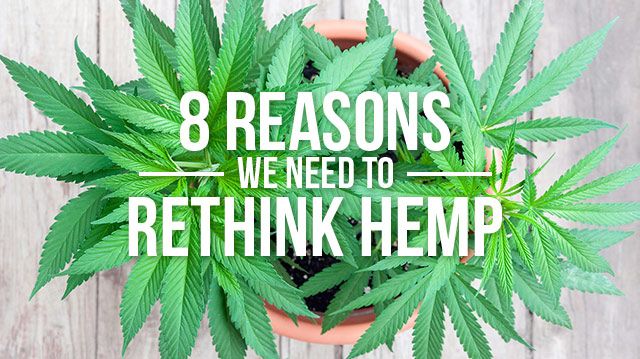 As a result of a continuing nationwide battle over its legalization, cannabis continues to attract the attention of the media and spark heated debate amongst otherwise seemingly placid citizens. In a number of states, recreational use of marijuana has been legalized while many others have now permitted the use of cannabis for medicinal properties.

This slow but sure process of legalization merely reflects an overwhelming body of evidence that supports the various wondrous properties of marijuana. In addition to making you hungry, curing anxiety and making you a little wacky, cannabis proponents claim that it has the potential to treat cancer, seizures, multiple sclerosis, glaucoma, inflammation and a host of other health issues. Either way, the power of Cannabis sativa is becoming hard to deny; however, little attention has been given to its less charismatic sibling, hemp.

Hemp is a low-tetrahydrocannabinol (THC), high-non-euphoric cannabidiol (CBD) strain of marijuana that, despite its undisputed health benefits, has until recently been illegal to grow throughout the United States following a 75-year prohibition. Today, hemp is legal in 13 states, but it continues to be misunderstood and unjustly associated with marijuana. Here are eight reasons why we need to rethink our stance on hemp and give it the support and growth it deserves.

It’s ridiculously good for you

Like marijuana, hemp is bursting with goodness and can provide a wide range of health benefits. To start with, hemp seeds have high concentrations of omega-3 fatty acids, which are important for heart health and have strong anti-inflammatory properties. Hemp seeds also contain plenty of soluble and insoluble fiber, meaning they can help support digestive health. What’s more, they’re high in protein, taste delicious and are filled with other heart-healthy compounds such as the amino acid arginine.

It’s good for the planet

Hemp is crazy sustainable, needing very little fertilizer, requiring no pesticides and actually revitalizing the soil it grows in. It does this by simultaneously aerating the soil and fixing it with carbon dioxide as it develops, meaning crops that follow after the hemp is harvested will benefit more than if hemp hadn’t been planted there in the first place. In addition to hemp being a wonder crop, it has a huge range of uses, including paper, textiles, clothing, health products, biodegradable plastics and biofuels.

It gets imported anyway

While much of the United States has been banning the growth of hemp for some time, regulations on importation of hemp products are much looser. As a result, much of America’s available hemp products are coming in from our neighbors in Canada, bolstering their economy while depleting ours. Considering how easy it is to grow hemp and how many uses there are for it, this status quo makes no sense, because why would you allow sale of hemp while restricting growth of it?

It’s not the same as marijuana

Most of the hemp-haters have developed their anti-hemp standpoint based on its perceived association to Cannabis sativa, aka marijuana. A study produced by the University of Minnesota should clear that misconception right up, showing that there is a significant genetic difference between marijuana and hemp. The verdict: Hemp won’t mess with your head, having only 0.3 to 1.5 percent THC (the compound which produces marijuana’s characteristic “high”), whereas marijuana has between five and 10 percent THC. Enough said.

It actually cleans up toxic wasteland

If ever there were a crop that was created to thrive in a nuclear holocaust, hemp is it. In less apocalyptic circumstances, however, it’s still exceedingly useful. It has the ability to suppress weeds, meaning little maintenance is required and it can prevent the spread of invasive species. It uptakes and absorbs toxic chemicals, making it a very practical crop for cleaning up contaminated land. And it can even absorb radiation, if that sorry event should ever come to pass.

It’s got a negative carbon footprint

This essentially means that hemp actually reduces the amount of carbon dioxide in the atmosphere by acting as a carbon sink. This is the kind of thing America needs more of in its attempt to cut down on CO2 emissions and work toward becoming a carbon-neutral nation. What’s more, hemp products can also be carbon sinks — “hempcrete,” unlike conventional concrete, actually absorbs carbon dioxide while releasing oxygen.

Hemp is one of the strongest plant fibers available and has traditionally been used by sailors to fasten ships and sails. In addition, hemp can produce almost three times as much fiber as cotton and six times more fiber than flax using the same amount of land. That’s a lot of fiber.

As mentioned earlier, hemp seeds have a plethora of uses. They can be eaten whole on salads or in dishes, can be ground down for a ready source of healthy fats and protein, and their oils can be used for haircare and skincare or as detergent. Is there anything hemp can’t do?