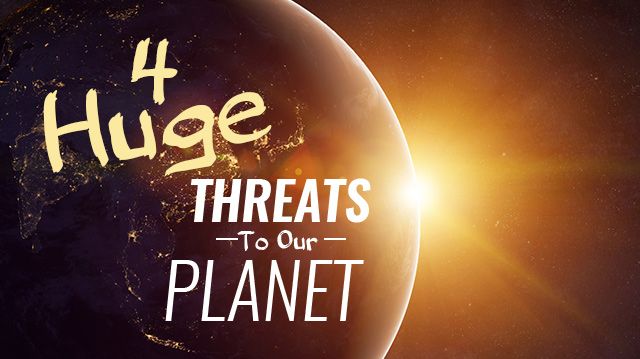 It’s no secret that our modern way of life is pretty disastrous for the planet. Our oceans, air and land are being desecrated, and while some efforts are underway to mitigate the damage, they may not be progressing quickly enough.

Planet Earth. This list is by no means exhaustive, but if we addressed these four issues in a unified and serious manner, we’d have ourselves a good start in bringing our planet back to health.

The United States alone produces an astounding amount of landfill waste. According to the organization Think Outside the Bin, “Americans generate 250 million tons of garbage a year, and some reports show over 400 million tons.”

Think Outside the Bin also reports that about one-third of this waste comes from packaging, which is largely unnecessary if we would only think of greener ways to wrap, seal and transport our goods. Much of this packaging is plastic, which is usually not biodegradable.

While garbage piling up in landfills creates one huge problem, the integrity of the landfill structures is also a huge cause for concern. According to Think Outside the Bin, as of March 2000, 82 percent of landfill cells surveyed contained leaks. Even if some of these have since been repaired, dangerous toxins are leaching from our landfills into our soil and water on a pretty consistent basis.

The amount of landfill waste produced around the world is completely staggering. The authors of a 2013 study published in the journal Nature found that in 2010, the amount of solid waste generated around the world was over 3.5 million tonnes. That’s over 7.7 billion pounds of garbage! Even more shocking, this number is expected to nearly double by 2025.

When landfills are shut down, all that trash still has to go somewhere. For example, since a landfill site in the city of Beirut, Lebanon, was shut down last year, a “river of garbage” hundreds of meters long has been snaking through the city. It currently contains about two million tonnes of trash, the toxins from which are being released directly into the soil, and into the atmosphere.

Along with land pollution from the insane amounts of garbage being tossed into landfills (and into the streets in the absence of landfills), the world’s water is also at risk. Both oceans and freshwater bodies, such as lakes and rivers, are becoming increasingly tainted with pollutants the world over.

As far as oceans, we recently reported on a World Economic Forum report that predicts by the year 2050, our oceans will contain more plastic than fish. Think Outside the Bin reports that an island of plastic twice the size of the state of Texas is floating in the Pacific Ocean.

Fresh drinking water around the world is threatened by many factors, including fracking (which we’ll discuss more below) and the agriculture industry (especially the meat industry), to name just two sources of pollution. In China, the problem is widespread: Nearly two-thirds of the residents of rural China drink and wash with water contaminated by “human and industrial waste,” according to Business Insider.

The problem is so bad in Wenzhou that a local river has been turned blood-red due to waste from a closed dye factory. The surrounding soil is red, as well.

Much of the hydraulic fracturing, aka fracking, in the world is performed in the United States, although it also occurs in nations including Argentina, Canada, China, Great Britain and Poland. Fracking is a way of extracting natural gas from underground shale, and it has a number of potentially hazardous drawbacks.

The fracking process includes drilling horizontal wells about a mile into the ground. A large amount of water treated with chemicals — the “fracking liquid” — is then pumped into the shale. Through this process, natural gas is released into the wells.

One problem with this process is the copious amounts of water that is needed. Because many areas of our country — and the world — experience drought, pumping it into the ground does not seem like the best way to go. This also cuts into water supplies that may be needed for agriculture, especially in areas where water is scarce.

Also, once the fracking is complete, millions of gallons of wastewater is created. In many places, fracking companies do not have to disclose all of the chemicals in the wastewater, so a plethora of unknown toxins can contaminate drinking water sources. Many of the known toxins are potentially carcinogenic.

Additionally, the fracking process produces greenhouse gases including methane, which pollute our air and contribute to climate change.

Speaking of climate change, this is probably the largest environmental challenge that our planet faces today. NASA has recently released data stating that the last few months are the warmest on record — since global temperatures first started being recorded. This is not good news.

Arctic ice is melting; studies are saying sea life may die out in large numbers; and rivers are drying up. All of these things have been linked to climate change. Because of the rise of sea levels, people in the Arctic are losing their homes. According to a new study published in Environmental Letters, five islands in the Pacific Ocean are now gone because of sea level rise.

Furthermore, climate change is putting many animal species, such as red foxes, at risk. It is also linked to increased risks of droughts and storms. This spells a potential global catastrophe for all living things on Earth.

If we are to help our planet in a significant way, the whole world needs to take notice, and to care. We need to seriously rethink many aspects of our modern lifestyle, which lead to landfill waste, water pollution and greenhouse gas emissions — all impact climate change.

Making a serious switch to green energy sources, such as wind and solar, and improving technology to gather and store these sources, would go far in eliminating our need for oil and gas. These may seem like huge changes to make, but our planet is in huge trouble.

What have you done for Mother Nature today? Is your community involved in any projects that help our planet?