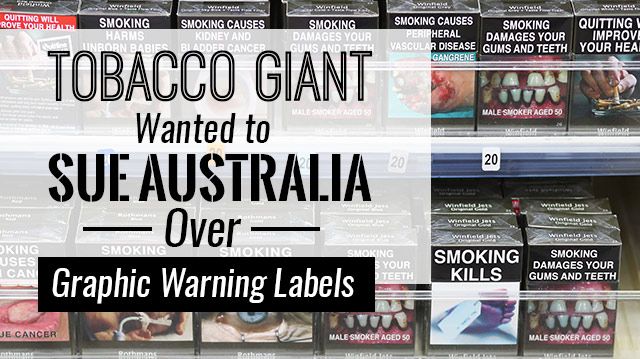 Buying cigarettes in Australia involves choosing among shelves of different graphically illustrated, awful illnesses, as that’s how cigarettes legally have to be packaged. Though in reality people can’t choose how smoking tobacco will affect them, the situation is closer to real life than a shelf of glorified smoking brands.

Tobacco giant Philip Morris tried to sue Australia over its packaging laws in 2012, but the Hague international court ruled the attempt an “abuse of rights” in December last year. The 186-page ruling was unsealed on Tuesday.

Australia was the first country to mandate that cigarettes be sold in plain packages, with no branding and full, visual, health warnings, in an attempt to reduce smoking rates, especially among youth. Other countries are now considering the initiative, and Britain is making it compulsory this month.

In Britain, the tobacco industry also tried to defeat the law, but the high court in London rejected the challenge this week. Health spokespeople lauded the rejection a “crushing defeat for the tobacco industry,” and Harpal Kumar, head of Cancer Research UK, said it was “the beginning of the end for packaging that masks a deadly and addictive product … it reflects a huge effort aimed at protecting children from tobacco marketing.”

Philip Morris, which manufactures brands such as Marlboro, argued that the rules impinge on their trademark and intellectual property. Not only did the company want Australia to withdraw the law, it wanted damages of at least US$4.2 billion plus compound interest from Australia — that is, the Australian people.

The company lodged its challenge using an old trade deal between Australia and Hong Kong that included foreign investments, by restructuring its company so that it would fall under the treaty. The court ruled, however, that the cigarette company had restructured itself just to gain protection under the deal, finding that an “abuse of rights.”

Tobacco companies also ran a strong media campaign around the legislation, arguing, rather weakly, that retail workers would find it hard to distinguish between the different brands when selling them, and that crime syndicates would benefit from the packaging. Imperial Tobacco claimed it made Australia a nanny state — that is, an overprotective government.

The trend of corporations suing countries has gained traction over the last decade, with Australia counting 42 investor-state dispute settlement provisions in international treaties in 2014. If the Trans-Pacific Partnership is ratified, transnational corporations based in the US will have an avenue to sue Australia. Though there’s an exclusion for tobacco control measures, there isn’t one for other health issues.

So what do cigarette packets in Australia look like now?

Under Australian legislation, cigarettes have to be sold in logo-free, dark-brown-olive packaging (one of the least attractive colours, according to government research, especially for young people). The number of cigarettes in each packet, as well as the brand, is indicated in plain, uniform text, and most of the packet consists of graphic health warnings, such as, “Smoking causes mouth and throat cancer” or, “Smoking harms unborn babies.”

Yet the impact of the packaging has been less than you might imagine, with one study finding that before it, 20 percent of smokers wanted to quit, and after, 27 percent wanted to quit. And according to the Australian Bureau of Statistics, sales profits were barely affected by the measure, though they did decline after Australia implemented an increased sales tax.

However, a new US study from the Center for Tobacco Control Research and Education found that when smokers quit, healthcare costs immediately plunged. It found that if 10 percent of US smokers gave up cigarettes, and the rest cut back by 10 percent, the US could shave $63 billion off medical costs.

The analysis makes the case for tobacco-control policies as “a very good form of health care and societal investment by governments.”

But smoking is still killing over 480,000 Americans a year, with thousands of young people taking up the habit every day.

Meanwhile, the US tobacco industry spends a million dollars every hour to promote its products, according to Tom Frieden, director of the US Centers for Disease Control and Prevention.

And the day before the Australia Hague ruling was released, the US Supreme Court refused to hear a challenge by Philip Morris to a $25-million Oregon jury verdict in favor of a man whose wife died after smoking the company’s low-tar cigarettes.

The wife, Michelle Schwarz, began smoking in 1964, and tried to quit without any luck, before switching in 1976 to Philip Morris’ Merit brand, which was advertised as “full flavor” but “low-tar.”

She died in 1999 from a brain tumor that was the result of metastatic lung cancer. The suit accused the company of negligence and fraud.

According to the European Commission and the World Health Organization, smokers lose an average of 14 years of life. Tobacco smoke contains more than 4,000 chemicals, 250 of which are harmful and 50 of which cause cancer.

A world without advertising on packaging?

So, what would happen if other unhealthy products were sold in a similar way? What if sweet cereals, for example, were sold with giant warnings that they were more harmful than a lot of junk food, and the only information on the package was… information. What if microwave popcorn packaging only contained the product name, ingredients, quantity, and a giant warning that some of the ingredients cause cancer? Or if Coca Cola and Pepsi were sold in plain cans with obesity and kidney malfunction warnings? We should ask ourselves if consumers, especially younger ones, have a right to shop without manipulation.