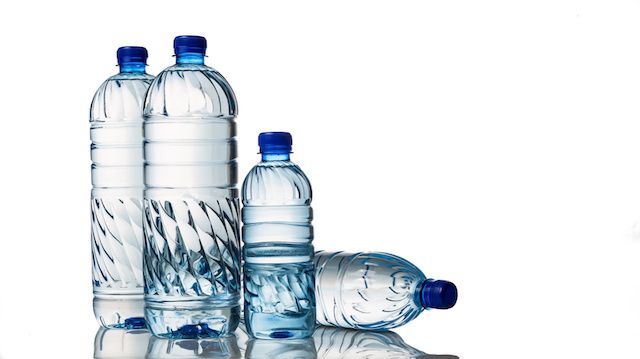 The bottled-water industry spends billions of dollars each year to mislead us into thinking that their “pure” water is what we need. In fact, it has been so successful that sales have outnumbered most other beverages sold, making bottled water the second most popular beverage in the US. However, we now know that a majority of bottled water, sold for premium prices, may not be so pure after all.

Straight from the tap

The FDA monitors and inspects bottled-water products and processing plants under its food safety program throughout the US. When the FDA inspects plants, it verifies that the plant’s product water and operational water supply are obtained from an approved source. Furthermore, the FDA inspects washing and sanitizing procedures and bottling operations, and determines whether the manufacturers analyze their source water and product water for contaminants.

Yet, when the Environmental Working Group (EWG) analyzed manufacturers’ websites and the product labels of various bottled water to determine whether companies disclosed information such as water source, treatment and purity testing, what they found was surprising if not deceptive. Out of 170 different bottled waters, they found approximately 40 percent was ordinary tap water, which may or may not have received any additional purification.

Since the FDA’s main criteria stipulates that water supply comes from an approved water source, then public tap water is extremely cost efficient — don’t you think? But how does the bottled-water industry manage to sell us a product that we already have flowing from our own taps?

Well, it seems that 18 percent of bottled-water manufacturers don’t divulge where they get their water from, and what’s more disturbing, 32 percent do not disclose any information regarding the treatment or purity of the water they’re selling, the EWG suggests.

The majority of bottled-water companies in the US are generally small, community-based companies that use local water sources and distribute their products within an average radius of 300 miles from their bottling facilities, according to the International Bottled Water Association (IBWA). They make a lot of money by drawing water from public water sources, distributing it in plastic containers and then reselling it at 2,900 times the price of regular tap water.

In 2007, two of the world’s leading beverage companies openly admitted that Aquafina water, owned by PepsiCo, and Dasani water, owned by the Coca-Cola Company, came from the same local water source as tap water.

“If this helps clarify the fact that the water originates from public sources, then it’s a reasonable thing to do,” representative Michelle Naughton for PepsiCo said to ABC News regarding labels spelling out “public water source.”

“We don’t believe that consumers are confused about the source of Dasani water,” Coca-Cola representative Diana Garza Ciarlante told ABC News. “The label clearly states that it is purified water.”

The Safe Drinking Water Act was created to protect the quality of drinking water in the US. What that means as per the Environmental Protection Agency (EPA) is that minimum standards are in place to protect tap water. However, all owners or operators of public water systems must comply with these primary (health-related) standards, the EPA says.

Yet, in 2009, the EWG revealed through independent testing, that 38 low-level contaminants and eight chemicals were found in 10 brands of bottled water.

Second only to soft drinks

In 2015, more than 360 bottled-water industry representatives from across the country urged the National Park Service to allow the sale of bottled water throughout parks, according to the IBWA. Apparently, they were concerned about the health, wellness and safety of visitors to the national parks.

Here’s a thought: Why not ensure that hikers, campers and visitors actually have fresh water sources available to them, which doesn’t cost an arm and a leg, and won’t impact the environment with empty water bottles?

“Efforts to eliminate or reduce access to bottled water in our national parks,” the IBWA suggests, “will lead to consumers defaulting to less-healthy drink options that have more packaging and more sugar.” Interesting — but we know where this is going.

Bottled-water consumption is about half that of carbonated soft drinks and only slightly ahead of milk and beer. While there’s no disputing that water is definitely a healthier option than sugary sodas, let’s not “sugarcoat” this. Bottled-water producers want to increase their market share, plain and simple. But what about so-called “healthy water” with added sugar.

Coca-Cola markets vitaminwater as simply, water with “bold fruity flavors and just the right amount of sugar to make it delicious.”

First, let’s get past the marketing hype and see how much sugar vitaminwater actually needs to make it taste delicious — 32 grams to be exact. That equates to about six-and-a-half teaspoons of sugar. By comparison, regular Coca-Cola has 39 grams of sugar. So why not have a Coke instead?

To be fair, unlike Coke, vitaminwater does contain added vitamins. But if you can afford the hefty price of vitaminwater, surely you can afford nutritional supplements — without the added sugar.  Sugary “vitamin-infused” waters are just as bad as sugary sodas and contribute to obesity and diabetes in the US and throughout the world.

While vitaminwater is certainly not the sole contributor to obesity, it is, like many health foods, hyped up to make you think you’re consuming a health product, which it is not.

In 1976, every American drank 1.6 gallons of bottled water per year, by 2014 that figure grew to 34 gallons per person. “The continued increase in per capita consumption indicates that consumers see bottled water as a healthy alternative to other packaged beverages,” the IBWA says. That translates to big bucks for the bottled-water industry.

In 2014 alone, US consumers paid 13 billion dollars for the privilege of drinking bottled water. In most cases, this water could have been filtered from their own water source — the kitchen tap — for a fraction of the cost and causing far less harm to the environment.

Instead of stocking up on bottled tap water, maybe we should concentrate instead on improving the quality of our drinking water.