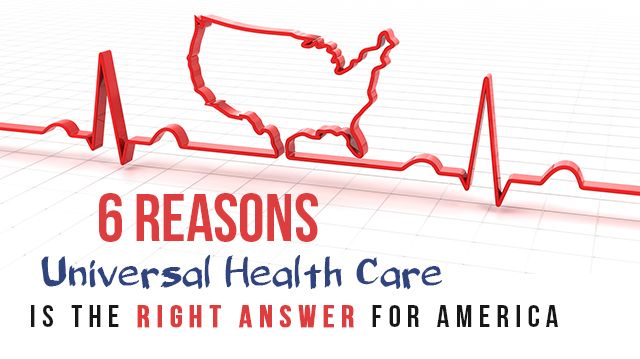 Our healthcare system needs “fundamental changes.” That’s according to more than 2,000 physicians who are calling for a government run single-payer healthcare system. According to the proposal published in the American Journal of Public Health, the Affordable Care Act did not go far enough and a better system can be achieved fairly easily.

The authors propose a National Health Program (NHP) and there are a number of reasons this proposal, titled “Moving Forward from the Affordable Care Act to a Single-Payer System,” might be the best answer we’ve had so far to our continuing healthcare problem here in the U.S.

According to the authors of the proposal, 27 million Americans will remain without insurance despite the full implementation of the Affordable Care Act. “Our patients can’t afford care and don’t have access to the care they need, while the system is ever more wasteful, throwing away money on bureaucratic expanse and absurd prices from the drug companies,” said one of the authors, David Himmelstein, professor at CUNY School of Public Health at Hunter College and Harvard Medical School lecturer.

Doctor-patient relationships can be maintained easier

When a person has to switch insurance coverage due to a job change or personal financial reasons — even with current healthcare law — he or she may be forced to find a new doctor. Beyond the 27 million people who remain uninsured, “many more are underinsured or constrained by ‘narrow networks’ of providers that limit choice and rupture longstanding therapeutic relationships.” It’s pretty simple: Patients receive better care from doctors who are familiar with their medical history, and the ACA threatens long-term relationships between patients and providers.

According to the proposal, all residents would have the freedom to see any physician they want in the nation. They would also be able to receive treatment at any hospital with guaranteed coverage, zero deductibles, premiums or co-pays. That means the cost of seeing a doctor would no longer be a factor in seeking care.

We’ll all save more money

Not only would premium, co-pay and deductible-free healthcare keep money in the pockets of our citizens, it would also save the government money in the long run. The federal government already pays for two-thirds of all healthcare fees and spending in the United States as it is, and with the elimination of insurance companies and an adoption of a single-payer system, administration costs would go down. It’s a win-win.

We have the highest drug prices in the world these days, so we’d likely save a ton of money when it comes to our prescriptions too. The proposal calls for direct negotiations with pharmaceutical companies, like other countries enjoy.

Canadian healthcare has operated under a single-payer system since the 1960s. Residents receive healthcare at about half the cost per person for the same treatments and procedures as we have here in the United States. Rather than routing medical bills through an insurance company before patients pay the remainder of the balance, in Canada bills for physicians and hospital services are covered by the government. Optometrist care, dentistry and prescriptions aren’t covered in Canada, so most people purchase supplemental coverage for those. Overall, though, Canadians save money and receive great care in the process.

Healthcare is a subject of much debate this political cycle, with Bernie Sanders pulling for a single-payer system, Hillary Clinton focused on revamping Obamacare and Donald Trump vaguely promising to end Obamacare “and replace it with something terrific.” Where we’ll end up is anyone’s guess, but we’re overdue for reform.