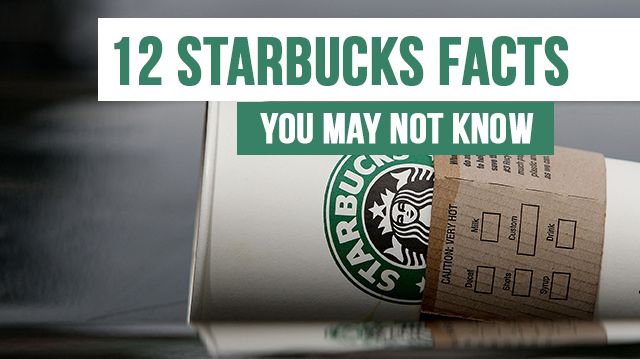 In the world of coffee shops, Starbucks is king. Sure, you may prefer Dunkin’ Donuts or a local independent shop, but the fact remains that Starbucks is everywhere and they add an average of two stores around the world every day.

But it’s not all bad news. In addition to taking care of their employees, Starbucks has a rather interesting history. Here are 12 things you might not know about Starbucks.

The original logo was pretty risqué

Inspired by the sea — Starbuck was a character in Moby Dick — the 16th-century Norse mermaid on the original company logo was certainly NSFW. With two bare breasts and two fins held up to her shoulders, the logo was intended to represent coffee’s seductive power. As any coffee lover will tell you, we don’t need a watery tart passing out coffee to get us to drink it, and no one really had a problem with it. That is, until the company had to slap the logo on the side of delivery trucks. Today she demurely covers her lady bits with long flowing hair.

Starbucks’ first location opened in Seattle on March 30, 1971, but only sold roasted whole-bean coffee and coffee-making equipment. They gave away free samples of brewed coffee to give shoppers a taste of what they were buying, but mostly they sold beans. Howard Schultz, who was hired as the director of retail operations in the early ‘80s, wanted to expand to sell brewed coffee. The owners disagreed, so Schultz opened his own chain called Giornale in 1986. When he bought Starbucks a few years later, Schultz renamed the two Giornale stores Starbucks and the rest, as they say, is history.

There are stealth stores out there

Since Starbucks is so recognizable, when the company wants to try something new they do so in such a way that they don’t alienate their customer base. “Stealth stores” like 15th Avenue E Coffee and Tea in Seattle serve Starbucks products under another name. Such stores also serve alcohol and host live musicians without affecting the overall brand. Wine and craft beer has since been extended to ordinary Starbucks stores.

One look at the Starbucks dress code and you’ll either be pleased or feel restricted but, overall, it’s pretty fair. Shirts can’t be too short or too long if untucked and tattoos are okay, as long as they aren’t on your face or neck. “Treat tattoos as you treat speech,” the dress code states, “you can’t swear, make hateful comments or lewd jokes in the workplace, neither can your tattoos.” Hair needs to be a natural color — no purple, blue or green dye jobs — and gages, those round, expanded internal earrings some hipsters wear, are okay as long as they’re no larger than 10mm. You can even have a small nose stud, but leave the nail polish off; the company says polish can chip off and land in food.

When Howard Schultz came back as CEO in 2008, the company needed to make some cuts. The goal was to cut costs by $600 million. Literally half of that was going to employee health insurance premiums. Rather than cutting back on benefits, Schultz closed 600 stores. When stockholders balked at the move, Schultz suggested they sell their stocks if they weren’t happy with the company. Turns out they were that unhappy.

Most loyal customers visit at least 16 times per month

Starbucks customers love their coffee and tea. Like, really love it. While the average customer typically frequents their favorite Starbucks locations around six times per month, the most loyal customers are there around 16 times a month. That’s almost every other day, or four days a week all month long.

Drinks are larger than you think they are

Not only does a grande coffee from Starbucks contain 330 milligrams of caffeine — that’s equal to drinking four Red Bulls in one sitting — but some of their drinks are absurdly large. The largest drink size used to be a 12-ounce “tall” but today the Trenta size is a whopping 31 ounces. That’s larger than most people’s stomachs.

Starbucks has a ban on smells

Part of the coffee experience is the aroma. Very early on, Schultz banned anything that would interfere with the smell of the coffee. In the late 1980s, smoking in the store was banned — long before this became a norm — and employees were asked to refrain from wearing cologne or perfume.

The company’s profit margin is highest in China

Starbucks makes more money per cup in China and the Asia-Pacific region than anywhere else in the world, at around 32 percent profit. To put that another way, there’s about a 26 percent price difference between a cup of coffee in London vs. Beijing. The price difference isn’t due to material costs or taxes, but the “blind faith of local consumers in Starbucks and other Western brands,” according to Wang Zhendong, director of the Coffee Association of Shanghai.

Did you know that more than 20 percent of all orders in the United States are made via mobile devices? Add to that the digital dollars that one in six Americans spent from their Starbucks gift cards from the 2015 holiday season — you can order them online now — and you’ve got a very tech-centric sales model.

The company has committed to hiring at least 10,000 military veterans and military spouses by the end of 2018; the company has already hired more than 5,500. “Of the less than 1 percent who have served in the military, only 12 percent believe the U.S. public understands their service and sacrifice,” states the company website. Starbucks is doing their part to help veterans and spouses transition to civilian life and greets them with open arms.

Starbucks may dominate the industry, but they’ve got some great things going for them. So the next time you see a Starbucks open up near your home, just remember some of the good they’re doing in the world as you sip your cup of Joe.