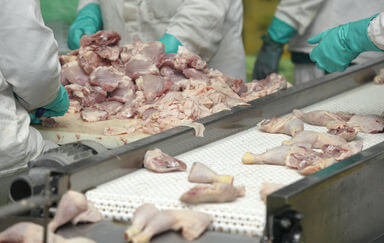 The amount of chickens that get through USDA inspection and receive a sticker of approval while still containing dangerous bacteria is staggering.

According to independent studies cited by Food Safety News, approximately two thirds of raw chickens purchased at United States supermarkets contain either Campylobacter or Salmonella, and in some cases, both.

The USDA has proposed a new food inspection system, a pilot project based on the current Hazard Analysis and Critical Control Point (HACCP) system, but this program seems even less effective than the current, flawed system. The pilot program has been found to be based on very limited data, according to a report by the Government Accountability Office (GAO).

The report, requested last month by New York Senator Kirsten Gillibrand, who was concerned about the new program, found that the data used to back up the efficacy of the pilot program was partially composed of information collected over 11 years ago, as well as other data that was nearly 20 years old. The USDA also applied some data from chicken plants to turkey plants, which is not an equivalency.

In fact, testing of the pilot program so far shows that it does not contribute to safety. As we elaborated in a previous article, plants that have been using this program in the United States, Canada and Australia have had to make significant recalls due to bacterial contamination.

Three U.S. hog plants using this program are ranked in the top 10 worst offenders for American health and safety violations, with one of these plants ranked as the worst of the worst.

In a recent editorial, Dan Flynn, an editor at Food Safety News, explained that our current HACCP inspection system, has not been updated since 1957. Obviously, a lot has changed since then, including but not limited to the rise of antibiotic-resistant bacteria strains, one of these being Salmonella.

While we are waiting for our government to modernize its meat inspection and pathogen-testing procedures, to a model that actually reduces contamination instead of promoting it, we’ll stick with our organic, grass-fed meats, thank you very much.