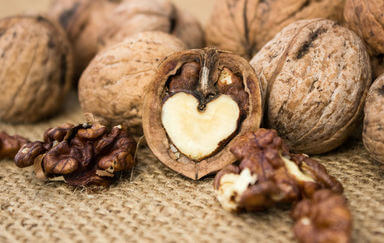 Do you ever wonder what the squirrels find so irresistible about those nuts that fall to the ground each fall? Not only are these nuts a great source of energy for squirrels over the winter, but many of them are also good for us as well. The Food and Drug Administration tells us that eating 1.5 ounces of nuts daily can reduce our risk of heart disease.

A 1998 Harvard study of 86,000 women found that 35% fewer heart attacks happened in women who consumed a serving of nuts 5 times a week as compared to those who did not eat nuts regularly. Nuts contain fiber and monounsaturated fatty acids that lower bad cholesterol without interfering with good cholesterol.

There was once a time, not so long ago, when humans harvested nuts right alongside the squirrels, deer, turkeys, boars, raccoons and chipmunks. Nutting was nothing to joke about and was a matter of survival for the winter for Native Americans, colonists and European peasants. Many people who live a hand-to-mouth existence still depend on foraging for their survival.

However, most of us have lost touch with this part of what it means to be human; to hunt and gather food for our dinner. Grocery stores, and fast food outlets have made nuts nothing but a nuisance to many who spend hours sweeping or blowing them off of their driveway or patio.

Although most people know a nut from a berry, there is still confusion over which nuts can actually be eaten and which are best left untouched. We did a little research to clear this up and have provided a short list of 3 popular nuts that are both tasty and nutritious.

Nuts You Can Eat

Time and time again we hear mothers telling their children to “spit out that acorn, it is poisonous,” however, this is not true, acorns are one of the oldest known foods to mankind. Evidence that acorns have been consumed for a very long time has been found in Paleolithic cave dwellings. Native Americans depended on acorns for bread and mush and the Pilgrims roasted them and commented that they tasted much like chestnuts.

Acorn kernels are a complete vegetable protein, provide energy-rich carbohydrates, are a good source of fiber and have been used to lower blood sugar. The annual nut crop from oak trees in North America is greater than the combined yield of almost all nut trees, wild and cultivated.

In North America, there are more than 60 types of oak trees and all produce a nutritious and edible nut. Nuts from white oaks are sweeter than most others, while the harvest from red oaks tends to be on the bitter side.

Once you harvest your nuts, you can remove the caps and shell them. The sweet acorns can be eaten raw or roasted. If the nuts are still too bitter, try boiling the kernels in water for 15 minutes to remove the tannins. If the water is brown, change it and boil again for 15 minutes; repeat until the water is just lightly tinted.

Hang on to the first batch of tannin water as it can be applied to insect bites, sunburn or rashes. After you remove the tannin, you can roast the nuts. Try adding them to bread or muffin dough or make acorn meal by grinding them. This meal can be used as a flour substitute.

Black walnut harvesting is not for the faint at heart, but very well worth the effort. You must first beat the squirrels to the harvest and remove the nut from the husk before the flesh rots and floods the inner kernel with bitter brown liquid.

Not to mention the fact that the juice is an indelible dye that is next to impossible to wash from skin and clothing. The next challenge is that you have to get the meat out of the shell; this is easier said than done. Some people put on heavy boots and rub the husks off against the ground, others dump them on their driveway and let a few days of traffic squish off the husks.

This makes for a rather large mess and a splattering of nuts all over the place. The best method is to put on old clothes and gloves and cut and scrape away the husks using a sharp knife. You can put the hulled nuts on a window screen, hose them off and allow them to sit in the sun to dry.

To get to the kernels inside you must smash your way in and pick out the edible pieces of nuts. You can use special nutcrackers or do the job the old fashioned way by placing a flat rock inside of a cardboard box, placing the nut on the box and delivering a forceful blow with a hammer. After all of your hard work, try using black walnut pieces in homemade ice cream, muffins or bread (always gluten-free, as we continue to educate on the dangers of wheat).

Black walnut extract has been used to treat a number of conditions including gout, rheumatism, worms, parasites and glandular problems. Some even refer to it as blood detoxifier and there is evidence that the chemical components in the nut may help to reduce blood pressure and balance blood sugar.

They also contain manganese and copper, which are necessary aids to antioxidants. Ellagic acid, a powerful antioxidant compound which is thought to interfere with the metabolic pathways that may cause cancer, is also found in black walnuts.

Considered a unique member of the nut tree family, black walnuts are a great source of omega-3 fatty acids which have been linked to lowering cholesterol, reducing inflammation and regulating heartbeat (Environmental Nutrition, 11/1/2000).

Hickory nuts, like black walnuts, will keep well in their shells once the husk is taken off and they are dried. Although they are easier to crack than black walnuts, the job still requires a hammer and some brute force.

These tasty nuts were one of the main sources of winter nutrition for the Native Americans. In fact, they used to store hundreds of bushels of the nuts and boil them to make a nutritional milk to add to foods.

Shagbark hickory nuts are loaded with B1 which helps keep the heart, muscles and central nervous system functioning. They provide a large dose of phosphorus and are also rich in magnesium to support a healthy heart and kidneys.

Hickory nuts have a pleasant taste and can be substituted for any recipe that calls for pecans or any other nut. Don’t throw the shells away either; if you have a wood burning stove, these shells put off a lot of heat and make your home smell wonderful. If you happen to have a charcoal grill, throw a handful of the shells in for an authentic hickory smoked taste.

Note: Be sure that you are able to correctly identify trees before gathering your nuts.