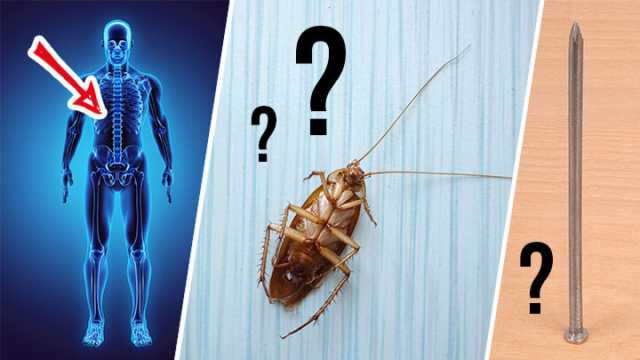 Reality is often stranger than fiction. Take, for instance, some of the bizarre things that physicians have removed from their patients. You just won’t believe these five weird things that doctors have discovered inside people.

A cockroach crawling in a cranial cavity next to someone’s brain. It’s something you’d expect to see in a sci-fi movie or an episode of Walking Dead. But a giant bug did really did creep into an Indian woman’s nose while she slept, causing intense discomfort as it slithered all the way to the base of her skull — right between the eyes, actually — before lodging close to her prefrontal cortex.

Selvi, 42, experienced a “tingling, crawling sensation” in one of her nostrils before dozing off. At first, she assumed she was catching a cold. Later, however, the sensation became so odd and uncomfortable that she believed something really awful must have been happening. “I could not explain the feeling,” she said, “but I was sure it was some insect.” She told local reporters that, whenever it moved, “it gave me a burning sensation in my eyes.”

Selvi visited four medical facilities before doctors used an endoscope at Stanley Medical College Hospital. They then discovered the true cause of her mysterious ailment. As M.N. Shankar, head of the ear, nose and throat department, explained, “It was a full grown cockroach. It was alive. And it didn’t seem to want to come out.”

In fact, the critter was lodged near the brain. Physicians attempted to use a suction device to extract the pest, but it clung to tissue inside the cranium. Ultimately, health professionals were able to use a combination of suction, forceps and tweezers to dislodge and remove the winged creature. In total, doctors estimated the bug had been inside Selvi’s skull for more than 12 hours. Had it remained there it would have certainly died and decomposed, which in all likelihood would have led to a potentially deadly cerebral infection.

The phenomena of Siamese twins is strange enough. Siblings that are joined at the hip or the head are a true rarity. But what about a sibling growing right inside you? It sounds impossible, but it’s just what happened to Sanju Bhagat, an Indian man who had his own mutated double growing in his abdomen.

Bhagat had always been self-conscious about his protruding belly, but he had no idea his partially-formed twin was living inside him. At age 36, however, the bulge in his tummy went from being an oddity that he had lived with to a pressing medical issue. In fact, Bhagat’s doctors initially believed he had a tumor that was beginning to affect his ability to breath. The physicians, however, were startled when they cut into Bhagat’s stomach. As one of the operating staff noted, a doctor “put his hand inside and he said there are a lot of bones inside.” First, one limb came out, then another limb came out. Then some part of genitalia, then some part of hair, some limbs, jaws, limbs, hair.”

Doctors were stunned. They had discovered Bhagat’s twin brother in his abdomen. It is an extremely rare medical condition known as fetus in fetu where the patient’s twin grows inside of them and survives as a parasite. All his life, Sanju had looked like his was pregnant. It turns out, there was another life growing inside of him.

It’s hard to imagine a more explosive medical emergency than having a live grenade lodged in your stomach. However, that’s the scary situation a U.S. soldier named Private Channing Moss found himself in while he was serving in Afghanistan.

Private Moss was on patrol when his unit was ambushed by the Taliban. An intense firefight ensued and during the exchange, a live rocket-propelled grenade pierced Moss in the stomach, but without exploding. As he later described events, “I smelled something smoking and I looked down… and I was smoking.” Had the RPG exploded, it would have killed Moss and anyone else within a 10-yard radius. Thankfully, Moss was evacuated and a brave medic removed the baseball-sized RPG from his gut.

“Un-freaking-believable.” Those were the first words Dante Autullo spoke after doctors told him that they had removed an almost 4-inch nail from his brain. The Chicago man was stretching on a ladder when he slipped, which triggered the nail gun that blasted his head. At first, Autullo didn’t realize the projectile had pierced his skull.

In fact, Autullo waited 36 hours before seeking medical treatment. During that time he drove his snow plow, took his daughter to a rehearsal and had a nap. Finally, severe nausea and body aches prompted him to visit the hospital where physicians discovered the bizarre object in his cranium. Amazingly, Autullo suffered no major ill-effects, but I guess you could say he redefined the meaning of “hitting the nail on the head.”

Talk about a hairy medical condition. An 18-year old girl had a close shave as doctors surgically removed a 40-pound hairball from her stomach. How could such a gargantuan oddity accumulate in her abdomen? It turns out, the young woman was nibbling her own locks and her follicle-rich diet simply furballed over the years. The doctors referred to her compulsive eating habits as “Rapunzel’s Syndrome.” Thankfully, the girl is fine after her hair-raising brush with medical misfortune.