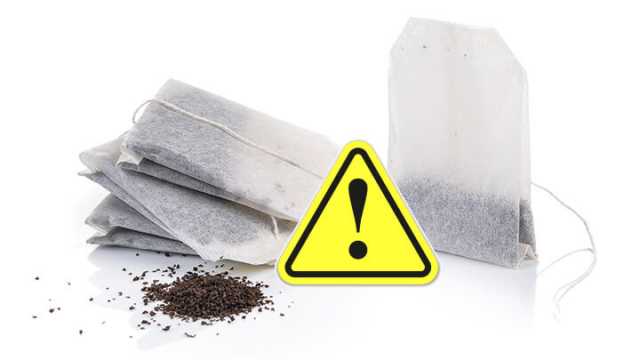 If you love your tea then you’re not alone. Americans drink 3.8 billion gallons of tea a year — that’s a lot of tea bags! But wait — do you really know what’s lurking inside your bagged tea? Sure, tea bags are more convenient. However, is the convenience worth risking your health? If you enjoy a good cup of brew, you need to know what else may be steeping in your cup.

You’re probably not consumed with thoughts of tea bags these days, but maybe you should be. Particularly if you’re like many Americans who drink tea daily. Did you know that those triangular — often marketed as “silky” — tea bags are actually made of plastic? They are those pyramid-shaped, infuser-type mesh bags that allow the tea leaves to fully develop in a cup of hot water before your very eyes.

Although they may be more visually appealing than the average paper tea bag, they are still made from plastic. And plastic can be toxic, especially when heated.

An article in The Atlantic raised some serious questions about the safety of plastic tea bags. Plastic tea bags are made from viscose rayon, PVC, thermoplastic and polypropylene. The most common are food grade nylon or polyethylene terephthalate (PET).

Nylon and PET plastics are considered two of the safest plastics since they have extremely high melting points. So, in theory, plastic chemicals should not leach out of the bag and into your cup of tea, right? Wrong.

Generally, the Tg of a material is always lower than the melting point. So, when it comes to PET plastics and food-grade nylon (as used in plastic tea bags) it’s safe to assume that their Tg is lower than the temperature of boiling water. For instance: PET melts at 482 degrees Fahrenheit, and the Tg is about 169 degrees. The Tg of nylon is 116 degrees Fahrenheit. The problem is, water boils at 212 degrees Fahrenheit. That means that the once flexible “silky” plastic tea bag now has the potential to become brittle and glassy. And any plastic that becomes brittle has the potential to leach out into your tea, ready for you to sip. Yikes!

“However, just because it makes it easier for something to leach out, it doesn’t mean it will,” says Dr. Ray Fernando, professor and director of polymers and coatings at Cal Poly San Luis Obispo to The Atlantic. “This would only happen if there are potential materials trapped in the substance. What we don’t know is what FDA requirements manufacturers must meet before they go to market.”

Are paper bags any better?

Well, not exactly. Wet paper tends to degrade easily. So, to combat that, many tea bags are treated with epichlorohydrin, a compound used to produce epoxy resins. The Centers for Disease Control (CDC) states epichlorohydrin can affect the body if it’s inhaled, swallowed or comes in contact with the eyes and skin. A report by the Environmental Protection Agency (EPA) suggests drinking water with high levels of epichlorohydrin, over a long period of time, could cause stomach problems and an increased risk of cancer.

And then there’s bleaching…

At one time tea bags were made from silk and muslin. Today, teabags are mainly made from paper, produced from a blend of wood and vegetable fibers. The problem is, both wood and vegetable pulp are usually chlorine-bleached. That means low levels of toxic chlorine compounds can end up in teabag paper — and in your cup.

Today, chlorine dioxide is used in pulp bleaching instead of elementary chlorine. Chlorine dioxide does not bind fibers, but breaks it down. This results in lower amounts of dioxins in the wood pulp, according to Conservatree.com. However, paper bleached with chlorine dioxide is still not completely chlorine-free as some paper manufacturers may claim. So, be mindful of that when choosing bagged tea products.

Dioxins accumulate in fatty tissues and disrupt the hormone system. According to the World Health Organization (WHO) dioxins are highly toxic and can cause reproductive and developmental problems. In addition, they can damage the immune system, interfere with hormones and also cause cancer.

More toxins in your tea cup

Tea is the most widely consumed beverage in the world next to water, reports the Tea Association. In the U.S. alone, 84 billion servings of tea (or more than 3.8 billion gallons) were consumed in 2016. On any given day, over 158 million Americans are drinking tea!

Canadians drink almost 10 billion cups of tea a year. That’s not surprising since there are so many health benefits to drinking tea — including antioxidants and reduced risk of cancer. In fact, every day, new findings from the scientific community lend credibility to tea’s healthy properties. But what about the toxins?

Since most tea isn’t washed before being put into bags, you may be surprised to discover that your favorite brew could contain pesticides. Many tea brands use words like “natural flavors” to entice consumers into buying their tea. Therefore, you may think you’re buying a healthier tea with cleaner ingredients. But several non-organic teas on the market have known carcinogenic pesticides in them.

A 2014 report by Greenpeace India found residues of hazardous chemical pesticides in several popular tea brands produced in India. Over half of the samples contained pesticides that either exceeded recommended limits, or were “unapproved” for use in tea cultivation. Some samples even tested positive for DDT, a highly toxic compound banned years ago.

Tea plants may also absorb fluoride from the soil. As a result, your cup of tea or bottled tea may contain high levels of fluoride. In the United States, brewed black tea averages about three to four parts per million of fluoride, suggests a report from Fluoridealert.org. Commercial iced tea drinks contain between one and four parts per million. That means that those who heavily drink hot or cold tea beverages risk developing fluoride toxicity.

In recent years, there have been several documented cases of skeletal fluorosis in the United States among heavy tea drinkers. Skeletal fluorosis is a bone disease caused by excessive accumulation of fluoride in the bones. In advanced cases, it can cause pain and damage to bones and joints, mimicking arthritis.

Dr. Michael Whyte, Professor of Medicine, Pediatrics and Genetics at Washington University in St. Louis has authored several studies on fluoride. He cautions that many tea drinkers are currently receiving fluoride doses that put them at risk for skeletal fluorosis. In Whyte’s studies, he found that the tea drinkers who developed skeletal fluorosis were often misdiagnosed for years as suffering from arthritis or fibromyalgia.

How to avoid toxic chemicals in your tea

So many toxins in your tea may seem overwhelming — but don’t be discouraged. You can still enjoy all the healthful benefits of tea without having to swallow toxins. Just remember the following points the next time you purchase tea.

And if you still prefer the simplicity and convenience of teabags, minimize your risk of toxins by purchasing products with labels that specify chlorine-free bags. And remember to always choose organic.