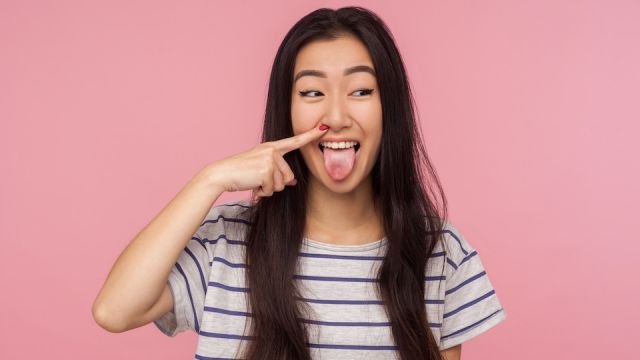 There are few things more embarrassing than getting caught picking your nose…but sometimes, those pesky boogers make this nasty habit hard to resist. With 91 percent of adults admitting to picking their noses from time to time, it’s clear that almost all of us struggle with boogers occasionally.

But have you ever noticed that you have particularly thick or troublesome deposits in your nose? There are a few reasons why this may be happening; here are the facts behind boogers and how to reduce them safely.

Why Your Body Makes Mucus

Whlie mucus may seem like an inconvenience at times, we wouldn’t be able to live without it. This bodily slime keeps the lining of the airway moist and protects it against foreign substances. Think of nasal mucus as a filter that effectively cleans the air we inhale and traps unwanted dust, allergens, and bacteria before they have a chance to enter the lungs and cause further problems.

Normally, mucus produced in the sinuses flows freely along the nasal passages and drains into the throat. This process sends inhaled ‘junk’ into the stomach instead of the lungs, where it can be safely neutralized by stomach acid. Mucus is driven toward the back of the throat by microscopic hairs called cilia. Nose hair also acts as another form of filter, capturing dust particles and germs before they can venture further into your system.

While mucus is supposed to flow freely, this isn’t always the case. Most people make about 1.5 quarts of mucus per day. This mucus gets diluted by a separate, watery secretion, which varies depending on your health. When there isn’t enough of this fluid (known as serous fluid) you can end up with pieces of dried mucus that contain trapped dirt or bacteria – also known as boogers.

If boogers get really dry and crusted against the walls of your nasal canal, it’s a recipe for a bloody nose. Removing these deposits can feel like pulling off a scab from a healing wound and cause injury to the underlying mucosa. This can also create a cycle of injury, crusting, and removal, which can become hard to break.

What To Do About Dried Boogers

If you find your nose is full of these unsavory formations, there are a few ways you can remove them and prevent future boogers from appearing.

Wash Out Your Sinuses

Both a neti pot and saline solution spray or mist will help to moisten mucus and move it down your digestive system or out of your nose. This will also help soften up boogies and get them moving as well.

If your boogers are tough to remove, resist picking them. Instead, take a hot, steamy shower, or put your face (carefully) over a steaming bowl to warm, moisten and soften the boogers. After this treatment, you should be able to blow your nose to remove the deposits instead of picking them.

Dehydration could contribute to a lack of that all-important serous fluid, and, as a result, thicker mucus. Try drinking several glasses of water a day and see if your booger situation improves.

Be Aware Of Your Environment

Environmental irritants like smog, exhaust fumes, or chemicals from work may irritate your sinuses, leading to increased mucus production. If this is an issue for you, can you travel a different route to work to avoid heavy traffic? Or you could even consider wearing a mask to protect your respiratory health.

Use a humidifier to fill your space with moisture and dampen and soften your mucus. This may be especially important in the winter when heaters tend to have a drying effect on indoor air.

If your mucus changes unrelated to a shift in your routine or environment, check with your physician to see if you have an underlying infection or illness. Some conditions, like allergic reactions and nonallergic rhinitis, may cause extra mucus buildup in your nasal passages. Likewise, sinus infections may cause more mucus.

How NOT To Fix Your Booger Problem

While a snotty nose may be annoying, take care not to take your war against boogers too far. Many people resort to nasal decongestant sprays, which can be addictive and dangerous. For example, one product called Afrin can become habit-forming.

According to throat doctor, Michael Ellis from Tulane University,

“Afrin relieves congestion by cutting down on blood flow to the cavities inside the nose, rapidly reducing swelling and opening up the nasal cavity. But soon after it wears off, it leads to rebound swelling, with the cavities getting even bigger than they were before. As a result, many people become totally dependent on these products, continuing to use them to fix congestion that they are causing in the first place.”

Stick with natural strategies such as hydration, humidity, and nasal irrigation to maintain a healthy, booger-free nose.