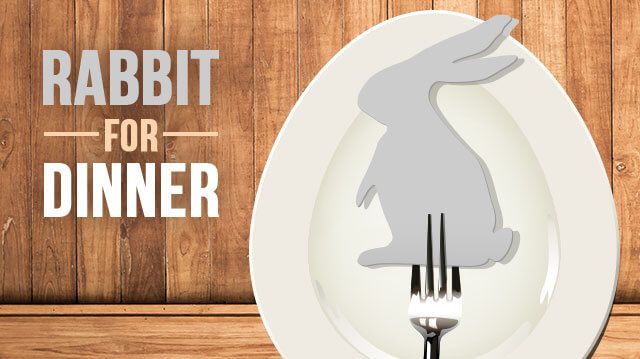 Living in South America has allowed me to experiment with a few new ingredients in the kitchen. One of which is rabbit. There is nothing quite like the savory flavors of rabbit to tantalize the taste buds. Couple your rabbit with quinoa, deliciously ripened baby tomatoes, a bottle of red, and you will be one happy camper.

For some in the United States, eating rabbit may be an inconceivable act that violates animal rights. You may even remember protests against the sale of rabbit meat outside Whole Foods a few years back. However, in light of the picketing, Whole Foods commented on the high number of requests it received “in favor” of having rabbit available for purchase.

In fact, Whole Foods was onto something. It turns out, rabbit, in comparison to most mainstream meats, is the lowest in calories and fat. It also contains an unbelievable amount of protein and other nutrients essential to your health. The Alternative Daily is breaking through the picket lines and serving up five hopping reasons rabbit should be on your table!

Rabbit is an exceptional source of protein

A 100-gram serving of rabbit will give you 29 grams of protein. Ground beef is comparable, but offers about twice as much fat and calories. According to a 2007 review by the World Cancer Research Fund and the American Institute for Cancer Research titled Food, Nutrition, Physical Activity, and the Prevention of Cancer: A Global Perspective, the recommended amount of protein per day for women is 46 grams and for men is 56 grams.

A serving of rabbit will boost your protein levels well beyond the recommended amount for a healthy body and mind. Protein creates the enzymes necessary for your body to function properly and efficiently. There are over 10,000 proteins in your body, and you need to fuel up from time to time. Rabbit is a lean, healthy choice that delivers enough protein for long days at work, exercise recovery times, or for putting in those extra two to three miles on your weekend hike.

Pump up your iron levels with rabbit

Rabbit is rich in iron, along with many other nutrients needed for a healthier and happier you. A hundred grams of rabbit meets 13 percent of your daily value (DV) of iron. Getting an adequate amount of this mineral can increase cognitive function, performance, and immune function. Iron also plays a key role in pregnancy.

A study published in Molecular Aspects of Medicine (2001), authored by Pauline T. Lieu and colleagues at the R.W. Johnson Pharmaceutical Research Institute in San Diego, California, discusses the health benefits of iron. The researchers found iron plays a vital role “for almost all living organisms by participating in a wide variety of metabolic processes, including oxygen transport, DNA synthesis, and electron transport.” Rabbit is an excellent delivery system for iron, more so than beef.

Rabbit can assist you in fighting disease with vitamin B12

Vitamin B12 boosts your energy, regulates your nervous system, decreases depression, lowers your risk for stroke and hypertension, and is great for healthy skin and hair. It also protects you against certain types of cancer, including breast, lung, colon, and prostate cancer. Making sure you have sufficient vitamin B12 levels can also reduce your risk of heart disease, America’s number-one killer.

Elevated homocysteine levels are associated with low levels of vitamins B6, B12 and folate, and can indicate a higher risk of cardiovascular disease, according to the National Institutes of Health. Therefore increasing your intake of B12, in combination with folate, can decrease homocysteine levels and protect you against heart disease. Who knew rabbit was so powerful!

Rabbit on your table may equate to more seats around your table. One way to battle male infertility is to raise selenium levels. It just so happens that rabbit contains 55 percent of your DV for selenium per 100 grams. That is 23 percent more than beef per 100 grams, another point in favor of rabbit.

Selenium is also an exceptional mineral for boosting your free-radical-fighting antioxidants. It is vital for glutathione peroxidase enzymes to function properly. This is an important function for your body’s detox system, which also protects you against oxidative stress.

“The Importance of Selenium to Human Health,” a study published in The Lancet (2000) by Dr. Margaret P. Rayman from the Centre for Nutrition and Food Safety at the University of Surrey, U.K., states, “As a constituent of selenoproteins, selenium has structural and enzymic roles, in the latter context being best-known as an antioxidant and catalyst for the production of active thyroid hormone.” Yes, among the many benefits of rabbit, thyroid health is another reason this lean protein should be on your table.

This is in fact true. Rabbits may be the catalyst for change with regards to the world’s ever rising problem of hunger and malnutrition. After the catastrophic 2010 earthquake in Haiti, a program was developed that was crucial to the survival of many of the island’s inhabitants. Raising rabbits was the program’s main focus.

Dr. Steven Lukefahr, an agriscientist at Texas A&M University-Kingsville, spoke about his work at the 2012 conference held in Egypt for the World Rabbit Science Association. The story and coverage was featured in Time (2012). The program in Haiti was developed after a large portion of the population left their devastated neighborhoods in the city and returned to the farmlands. 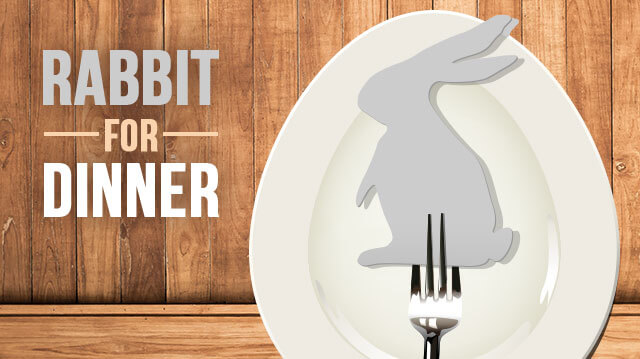 The project aimed to increase cuniculture, the practice of raising rabbits for meat, fur or wool. Due to the devastating effects of the earthquake on infrastructure, food supplies were limited and solutions came at a high price. In the midst of the crisis, rabbits became an unlikely food source. “Ten females and one male can produce around 200 offspring per year,” Lukefahr said in an interview with Time magazine. “That’s enough to provide high protein meat for the family and have some left over to sell at the local market.”

Rabbits are also an excellent livestock choice, since they do not require much room, nor do they rely on grain to grow. Rabbit meat is also very unique in the sense that it has a place in almost every culture around the world. It is kosher, halal, and a perfect alternative food source for Hindus as well.

Rabbit should be on your dinner table for a variety of reasons. It boasts vitamins and minerals that are absolutely vital for your health, while offering less calories and fat than beef. In fact, rabbit has less fat and calories than any other meat you will find at the supermarket. Yet rabbit rarely appears in nutritional lists that weigh up the various meat sources available to us. Maybe it is a cultural taboo in America, but we ought to remember that rabbit was a food choice in the US prior to World War II.

There are new food initiatives across the United States, in places like Portland, Oregon, where chefs are beginning to get more creative and are exploring the sustenance of our wagon-wheeling forefathers. Rabbit offers you many health and wellness benefits that are undeniable, not to mention delicious. With a quick Trip Advisor search, you can find a restaurant serving rabbit near you, or you can whip out the cookbook and try a new recipe. Are you ready to give rabbit a try? What is your favorite rabbit recipe?